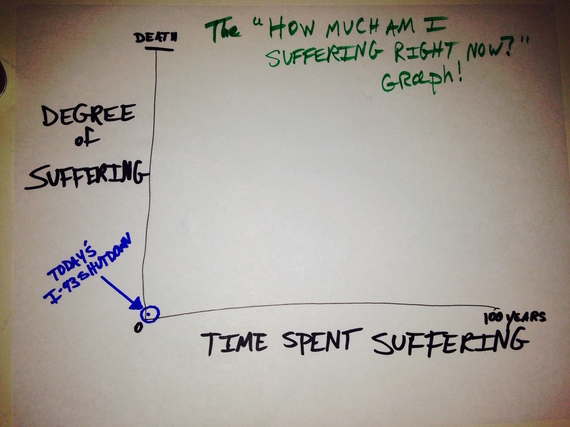 In light of today's I-93 shutdown by #BlackLivesMatter protesters, I made a handy graph to help us all get some perspective.

I already put the first data point, representing the suffering caused by today's highway shutdown. Please, on your own, add the following events to this graph.

1. Your unarmed son is shot dead by a police officer who then becomes a millionaire because he killed your son.

2. Your father is choked to death by police officers for selling cigarettes. It is caught on camera. None of the police officers suffer consequences, but the person who videotaped the event is brought up on gun charges.

3. A SWAT team bursts in the door of your house and shoots your seven-year-old daughter dead while she is sleeping on the couch. All charges are dropped for the killer.

4. Your 12-year-old son is shot dead by a police officer for playing by himself in a park with a toy gun. The officer may very well not face charges, but the fact that the boys father had been abusive is ruled important evidence in justifying the shooting.

Thanks for helping me with this graph!