According to Nathan Sanders' The Sugar Bean Sisters, directed by Gia Jordahl for Little Fish Theatre, the world consists of those who dream and those who don't. Whether the dream is far-fetched -- a desire to be abducted by aliens, redemptive -- a wish to atone for a crime committed decades before, or just a wish to find a good Mormon husband, it's the will to dream, irrespective of the dream itself, that motivates two sisters, residents of Florida's Buster Swamp, to soldier on when their present circumstances suggest they shouldn't. 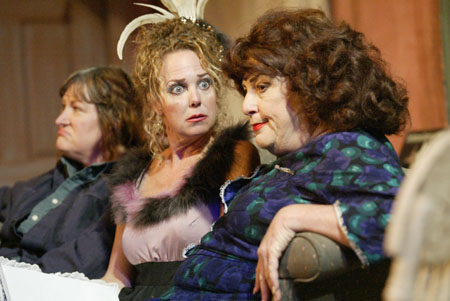 With wishes that loom before the unforgettable characters like Oz's Emerald City, this comedy rollicks and roils. Tempered, though, with tragic pasts (a lynching, an alleged death-by-alligator) and dim prospects, it's a dark and brooding comedy. Without missing a beat, Jordahl turns it into a Southern Gothic tale that feels as though it's narrated by Larry the Cable Guy. 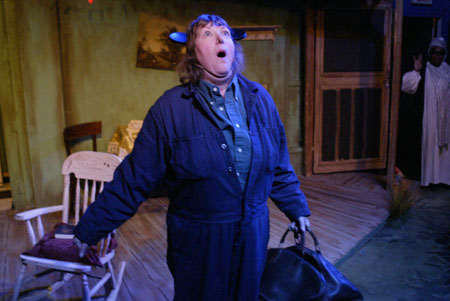 Though much of the plot consists of two women who wait for things to happen, the time spent waiting (especially for us) is anything but dull. Well-meaning and sincere, not a little industrious, the sisters are as loopy and set in their ways as Aunt Tillie on TV's Bewitched. One sister, Faye Clementine Nettles (Cindy Shields), wants to escape her past and present circumstances with passage on the spacecraft that she saw 25 years prior in her father's sugarcane field. The other sister, Willie Mae (Madeleine Drake), wants to trundle herself off to Salt Lake City to find a good Mormon husband. Complicating all this wishing, hoping, and praying is the arrival of an unexpected (to put it mildly) guest, Videllia Sparks (CaroleAnne Johnson). 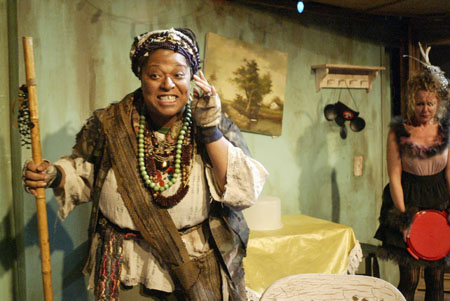 The cast brings these characters to life. The sisters may be off the wall, behind the times, out of their minds, but they're not delusional. Even though each woman's envisioned future may be cluttered with debris from the past, each woman understands her situation. As Willie Mae says, "You can roll a dog turd in powdered sugar, but that don't make it no wedding cookie," The one-line zingers zing; each dream reverberates. We don't just wonder what happens next, we also root for these three women. They remind us of our mothers, our aunts, our sisters; good God, they remind us of ... us! Understand them and you understand yourself. Before long, in that ramshackle house, with our new best friends, we feel like we know Buster Swamp, Florida. Call them the target demographic for late night AM talk radio programs or fodder for Jerry Springer, they manage to charm us with their tones of voice, facial ticks, far off gazes (to both the future as well as to outer space), and, best of all, a sincere and infectious belief in implausible things.