Rupert Murdoch's Sun newspaper is facing a massive backlash for the way it covered the shooting death of the girlfriend of Olympic runner Oscar Pistorius.

Pistorius has been charged with murder after Reeva Steenkamp was shot and killed in his home in South Africa. The Sun — which is the paper closest to Murdoch's heart — chose to highlight Steenkamp's modeling career by plastering a huge picture of her in a bikini on its front page. "3 shots. Screams. Silence. 3 more shots," the headline read.

Huge backlash today about the #Sun front page. Is this the most inappropriate picture ever of a murder victim? http://t.co/dn56keiZ

There are no words for how disgusting The Sun are for running this front cover today: pic.twitter.com/T0hiQLx3

This is a simply despicable front page. It glories in domestic violence. @rupertmurdoch apologise http://t.co/zz4d2uf7

Neil Wallis, a former deupty editor at the Sun, defended it:

Sun P1 "row" is totally fake. Just the usual suspects who never read the paper anyway but trying to get themselves some exposure

Feminist blogger Hannah Curtis launched a petition against the paper. Curtis called the front page "the most shocking and disrespectful thing I have ever seen published."

The Sun was not the only Murdoch paper to take this angle. The New York Post also published a bikini shot of Steenkamp on its front page.

The New York Daily News followed the trend as well. 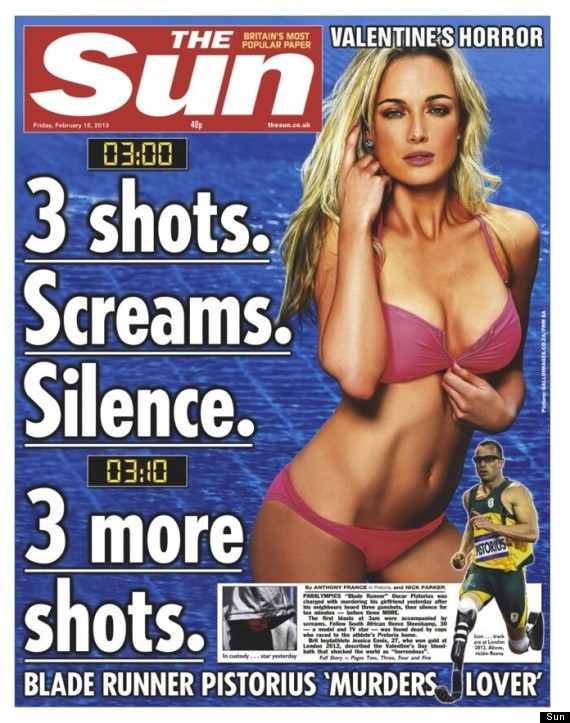 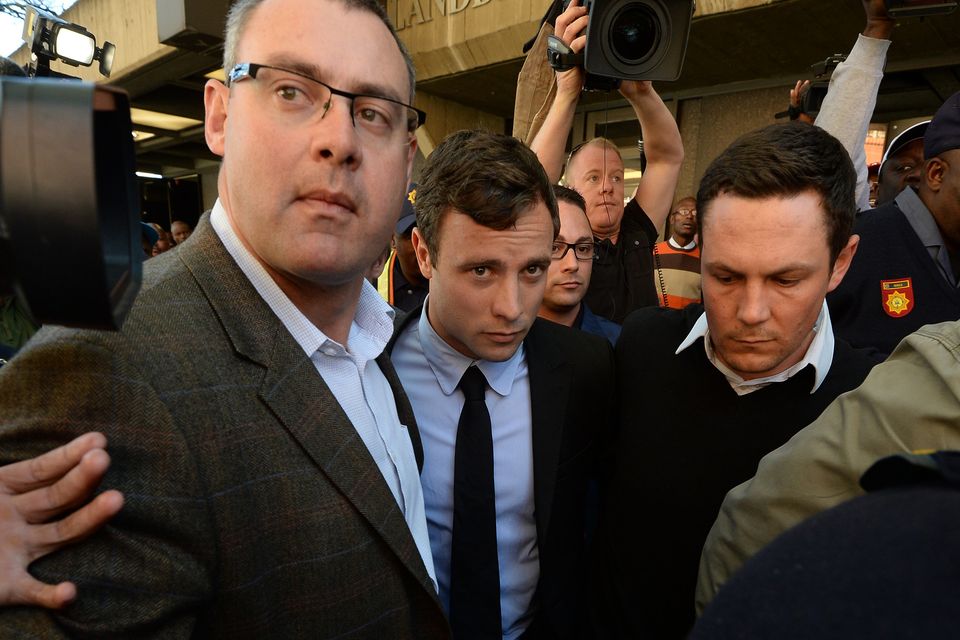 1 / 156
SAFRICA-SPORT-CRIME-COURT-PISTORIUS
South African Olympic sprinter Oscar Pistorius (C), flanked by bodyguards and policemen, leaves the Magistrate Court in Pretoria on August 19, 2013. Pistorius will go trial in March charged with murdering his girlfriend on Valentine's Day, a magistrate ruled at a packed court hearing on August 19, 2013. The athlete known as 'Blade Runner', who is currently out on bail, has admitted killing her but denied murder, saying he shot Steenkamp through a locked bathroom door because he believed she was an intruder. AFP PHOTO / ALEXANDER JOE (Photo credit should read ALEXANDER JOE/AFP/Getty Images)
Getty Images