Every year the Sundance Film Festival committee selects a group of filmmakers who usually have day jobs. These are the short filmmakers -- often first-time directors who had no reason at the start of their process to believe they'd reach the public at all, much less at the best-known film festival in the country. The HuffPost Culture series "The Sundance Diaries" will investigate the "short" path to Sundance with regular diary-style entries from many of the 32 storytellers, animators, and documentarians whose shorts were selected this year out of a pool of 4,038.

What would you do with an hour? That's what my production designer, Jean-Paul Leonard, suggested as the tagline on the poster for my short film, "Una Hora Por Favora." It's about a lonely lady who picks up a Latino day laborer for an hour and falls in love with him.

I'm heading over to the poster shoot in an hour and I'm feeling frantic to get the right tagline. My son Isaac, 15, insists that I don't need a tag at all. As we walk around the Grove waiting for his Genius Bar appointment, I spew out a few ideas: "He Gave Her an Hour, She Gave Him Her Heart," "Days of Hours Lives," and "Come See My Movie, It's Actually Only Twelve Minutes."

"It's called BLUE SKY CREATIVE," I told him, you have to let all of the bad ideas come out to get to the good ideas.

"They all suck," he said again.

I get to the poster shoot early. I'm super starving but I've promised myself I'm only eating lean salmon and vegetables for the next 3 weeks so I can look rail thin and pretty for the inevitable avalanche of paparazzi that's going to want pictures of me hobnobbing in the gift suites.

But the taco stand across from Jean-Paul's studio street looks beyond amazeballs. It's the day before New Year's so maybe I should just start my Sundance Diet on January 1st. I order French fries covered in nuclear green guacamole and a Carne Asada Platter as back up. Platter? The man asks me. Whole platter? Yes. Whole platter.

The super brilliant photographer Emily Shur is setting up her super bright lights when I get there. My plan is that once she's gotten enough shots of my actors, Michaela Watkins and Wilmer Valderrama, I plan to use this opportunity to get at least one decent headshot of myself. I recently realized that all those pictures we see of famous people shot with those sparkly over-lit flashes actually just fill in everything around them with a heavenly glow. They're no more stunning than the rest of us, they just always happen to have great light.

I ask makeup artist James Freitas to put a little make-up on me, something very natural, springy, fresh. He asks if I wouldn't mind going to the bathroom and wiping the guacamole off my face first.

We've got four changes of clothing each for Wilmer and Michaela and two backdrops. But when Wilmer gets there he tells us he has a private jet waiting at the airport because he's getting paid to party in Vegas for New Year's. He only has ten minutes. We better work fast.

As Wilmer changes from one t-shirt into another, I notice Emily's husband and temporary assistant, also named Isac, a lot older than 15, is sitting on his ass and not helping at all. Then I realize it's because he spilled some guacamole on his crotch and tried to wash it off before Wilmer got there, then it looked like he wet his pants which was an especially awkward stain to be rocking while Wilmer had his shirt off.

The bulbs popped. In ten minutes Wilmer was outta there. I spent another half hour with the gorgeous Michaela, then sent her on her way. Now it was my turn to finally get one of those beautifully lit head shots. I jumped in front of the background for a few snaps and put on my best smolder.

Soon after, Emily took down the colored backdrops and Jean-Paul and I went through the photos, winnowing down the very best pictures of Wilmer and Michaela. When I got to the shots of myself it turned out my smolder look actually communicated something more like 'she's recently had a stroke'. All of the light in the world and I looked like a hideous monster. Wilmer barely moved and delivered a hundred shots of pure perfection. No wonder he gets paid to party. Someone should pay me NOT to party.

A Love Story in 60 Minutes or Less. He's a Day Laborer of Love. One Hour Plus Two Hearts Equals BLAAARRRGGGHHH I DON'T KNOW. My kid's right, they all suck.

Do YOU have any ideas for a tag line? Even more important, which of these posters do you like the best? Tag line? 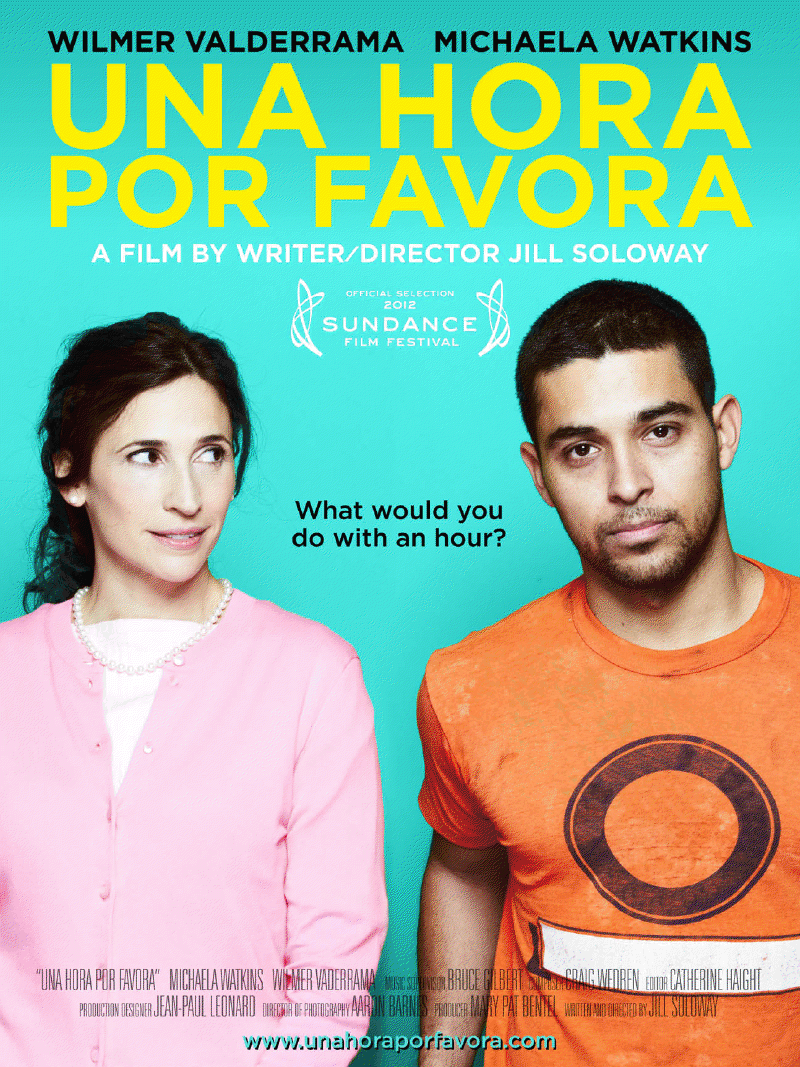 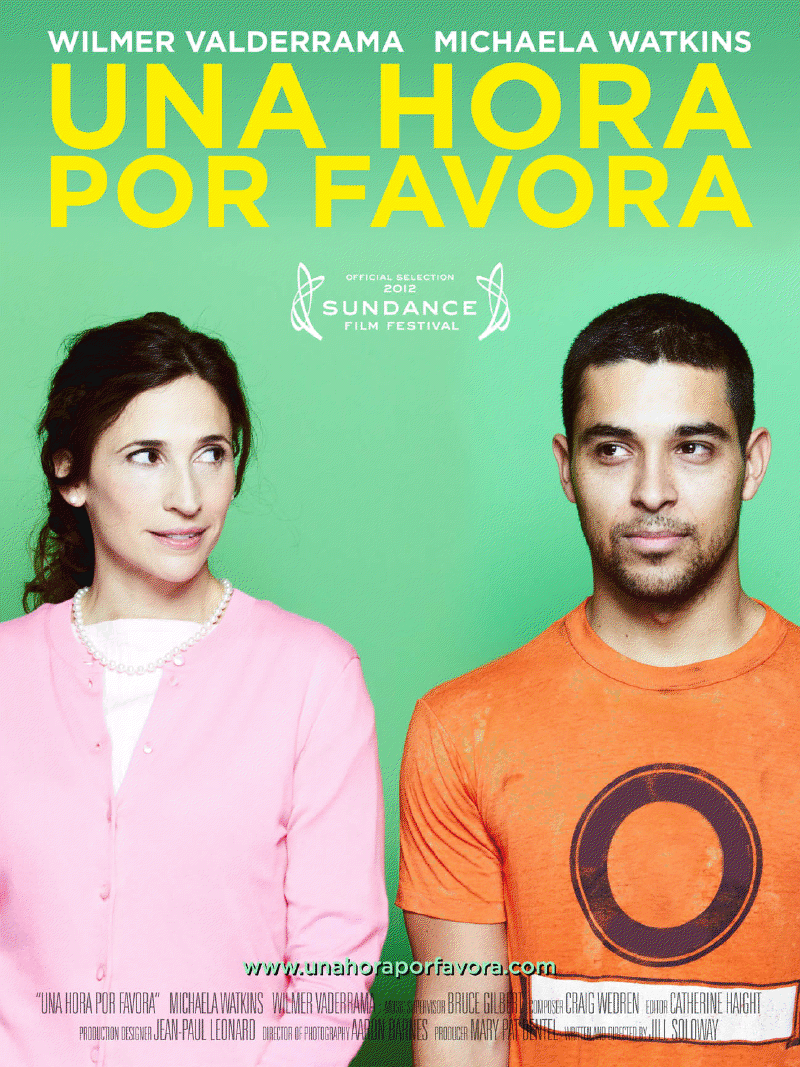 Self-congratulatory director ID line, or is it too much? 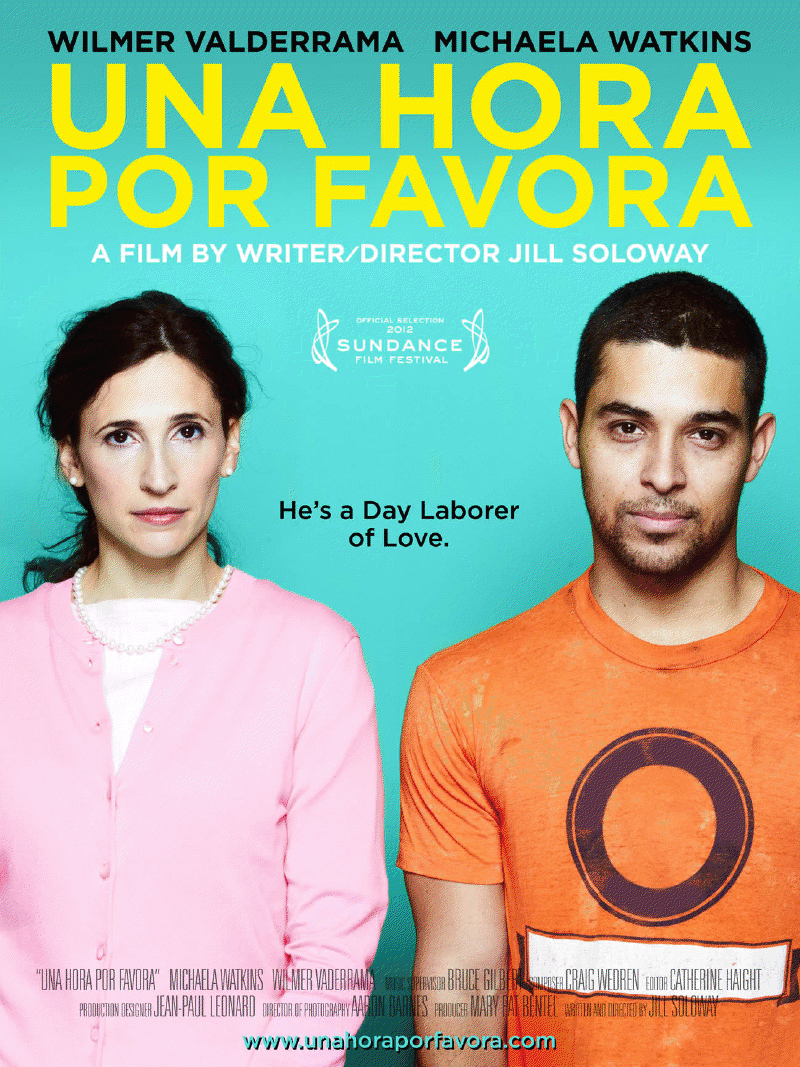 Choose 1, 2 or 3 in the comments section, if you don't mind. Thanks for your help. And see you at Sundance!