I am writing this blog from inside the basement. If you are reading this, walk down the stairs to the safe room in my soul and LET ME OUT.

Honestly, you should be suspicious as to whether this is even me. We need to come up with a secret word so you can be sure I haven't been murdered or kidnapped. Who in the world would wish to wrestle this important mantle from my hands, on the eve of my Sundance debut?

A few days ago, I received this email from my mother:

Hi Love,I came up with this draft as a possible blog post for you. It would be different from others, but I think it would get attention. This is the first draft and if you decide to pursue, feel free to put the Jill Soloway touch to it.Xoxo Mom

WHY I DIDN'T INVITE MY MOTHER TO SUNDANCE

Wait, that's not exactly true. I did invite her in a burst of euphoria after receiving the news that my short film, "UNA HORA POR FAVOR," was accepted for the festival. Understand, I was so giddy with the news that I invited everyone in my life, including the mail person, who I hope recognizes I was not really serious. Sort of like a drunk buying drinks for the house.

Back to my 4'9" Jewish mother -- remember these two facts because they are essential to my explanation. After I calmed down, and envisioned my tiny mom being jostled by parkas and ski-wielding Park City habitants, I worried that she'd be squashed. And if not by those down filled big boys, what about the Weinstein brothers, who I understand throw their weight around?

And then there's her habit of nodding off at parties. An early-to-bedder, I have proof in various Bar Mitzvah photos of my little mother, head on arms, snoozing away as the rest of us are dancing the Hora.

More? She has this habit of pulling on the elbows of anyone -- possibly even Bob Redford -- to tell them about her talented daughters (I have a sister who is not only talented, but also a lesbian which my minute mother also likes to proudly reveal). I've seen people recoil at her tug, but it's hopeless trying to stop her.

Now will you let me off the hook? You understand why this debut short film writer/director of "UNA HORA POR FAVOR," had her small mother's interest in heart when I suggested she'd be happier waiting until the film played in Chicago? And to further dissipate any guilt you're tossing my way, you should know the theme of this blog post was suggested by none other than my adorable petite understanding mother.

We've just entered a meta rabbit hole so deep that if you can find your way out without a set of crampons, tampons and and pick ax, I commend you. That's right, everything above was written BY my mother, IN MY VOICE, yet still ABOUT MY MOTHER, with a cute urge that I should publish her words as my own--of course with the Jill Soloway touch (sigh of relief, my touch is warranted).

The most insane part is that this doesn't even seem insane to me. She's a decent joke writer and the idea itself isn't half bad. I've only recently begun to notice how unhealthily intertwined we are; my relationship with her is the reveal at the chewy center of my film. In "UNA HORA," shortly after Elissa and day laborer Arturo become lovers, they get into a huge subtitled fight to rival Bardem and Cruz. In this absurdist climax, (somehow Elissa can speak perfect Spanish and Arturo has a crystal-clear view of her wound), he yells at her, in Spanish:

"You know what your problem is? You and your mother are in a romantic pact, whereby she implied to you that if you were ever to truly fall in love with a man, it would be a betrayal to her."

So, yeah, this sort of thing is a normal for us. The problems with her entry are more subtle: the fact that she spelled my movie title wrong twice, the implication that I dance the Hora. Her writing does work to illuminate her motivations: the fact that she mentions her size no less than 5 times in 500 words may be a clue as to why employing me as a life jacket comes naturally.

And maybe the charge of boundarilessness is moot in these days of interconnectedness. Maybe we are all each other. I'd be nothing but a fool if I were to alienate my mom before the Yahoo! Shorts Contest (wait till it goes live 1/19-1/27, then vote!). Elaine's got networks aplenty to animate. Where do you think I got this unquenchable ability to self-promote? 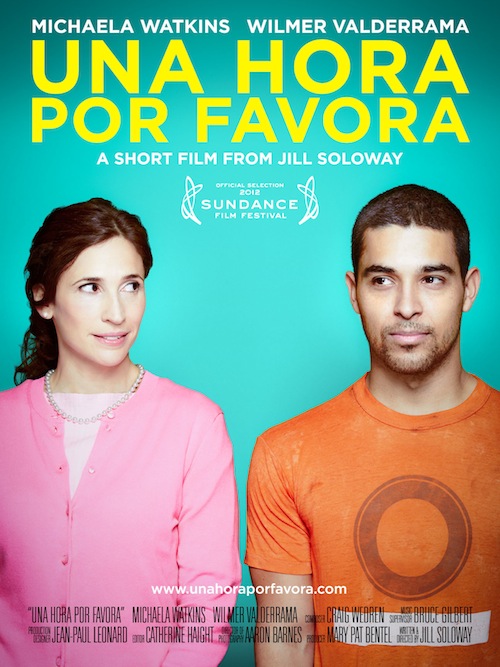 Worst part is, she's no dummy when it comes to PR. When I called to thank her for sending me the suggestion, but that in fact, I would NOT be publishing her words as my own but instead, would do a meta-exploration of her desire to have me publish her words as my own (as it relates to my film's theme), she said, "Fine but you should still call it WHY I DIDN'T INVITE MY MOM TO SUNDANCE. Great title."

Here's a poll-- my mom and are are so up each other's tumblrs that I can't even get a clear view out to save myself. Are we or aren't we over-identified with one another?