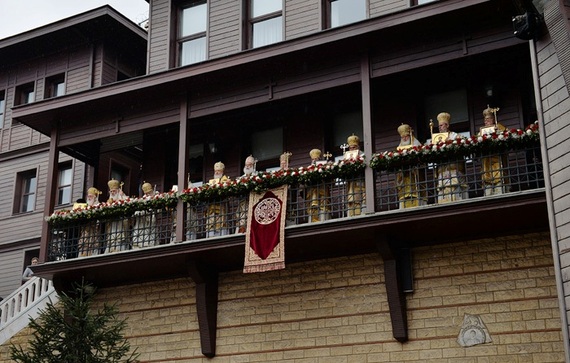 The Triumph of Orthodoxy, the celebration of true doctrine over heresy and the definitive restoration of the icons are joyously commemorated by the One, Holy, Catholic and Apostolic Church on the first Sunday of Great Lent.

This year's feast, celebrated on March 9, was made more magnificent as a Synaxis of the Primates of the Orthodox Churches was held at the Great Church of Christ -- the Ecumenical Patriarchate of Constantinople.

The Sunday of Orthodoxy as celebrated today first took place in 843 as the Iconoclast heresy was unambiguously ended by Empress Theodora, together with St. Methodius the Confessor, Patriarch of Constantinople -- an unyielding defender of the veneration of icons.

It was the saintly Empress who famously said:

If, for love's sake, anyone does not kiss and venerate these images in a relative manner, not worshiping them as gods but as images of their archetypes, let him be anathema!

Before this, however, many holy men and women suffered to the death for icons, the veneration of which is, and will always be, inextricably linked with Orthodoxy.

The martyric blood shed is nothing new for the Church, which continues to be persecuted in the present day, especially in the Middle East. This is also true for the Ecumenical Patriarchate, the "Ever-Illuminant Lighthouse of the Orthodox World," as it has been described.

In comparison to the architectural splendour of St. Peter's Basilica or to the Canterbury Cathedral, one could be excused if they did not immediately locate the humble Patriarchal headquarters in the Phanar neighbourhood of Istanbul.

What is more, unlike the freedom and favorable church-state relationship enjoyed by both the Pope of Rome and the Archbishop of Canterbury, the restrictions placed on His All-Holiness Ecumenical Patriarch Bartholomew by Recep Tayyip Erdogan's Turkey are institutionalized and many.

Despite its physical constraints and political restrictions, the Patriarchate perseveres, just as it has done throughout its almost two-thousand-year history. From its high prominence in the glorious Byzantine Empire, to its low -- the capture of Constantinople during the Fourth Crusade (1204) and then the four-century long enslavement under Ottoman rule (1453) -- the Patriarchate has persisted in carrying out its sacred mission.

One of its strongest and most resilient assets has been the Apostolic Succession following its founding by St. Andrew the Apostle. The 270 successors since the time of Christ have been some of the most erudite and holy pillars of all Christendom. Examples include St. Gregory the Theologian, St. John Chrysostom and St. Photios the Great; in total, 61 have been officially recognized by the Church as saints and/or martyrs. Since the 15th century alone, six Ecumenical Patriarchs have suffered violent deaths by hanging, including Gregory V, who was hung by Islamist Turkish authorities on the Sunday of Pascha in 1821 at the gateway of the Patriarchate, which to this day remains closed in his memory.

For the Patriarchate, its primacy of honour -- and associated privileges -- was granted by the entire Church and is protected by the Ecumenical Synods. Its administrative responsibilities and spiritual leadership has, and continues, to benefit the Church. Christianity has benefitted greatly by the multitudinous offerings of the Ecumenical Patriarchate, from its rich theological literature and its great missionary activity (e.g., Sts. Cyril and Methodios, Illuminators of the Slavs), to its contributions to the arts and iconography, music and hymnography and architecture (e.g., Hagia Sophia).

Even today, its pre-eminence in the Church continues, as witnessed by the four-day-long Synaxis of Primates under the presidency of His All-Holiness Ecumenical Patriarch Bartholomew.

The Primates discussed a number of issues, ranging from the challenges posed by technology and the advancements made in science, to the ramifications of the economic crisis and the tragic situations in the Middle East, particularly Syria, as well as in Ukraine. They also discussed the communion and unity of the Orthodox Churches since, unlike the rigid hierarchy practiced by Roman Catholicism, the Orthodox follow the ancient practice and hold to "the paramount importance of synodality in the Church," as expressed clearly by Patriarch Bartholomew in his opening address.

Perhaps the greatest achievement -- and show of unity -- was the decision to hold the "Holy and Great Synod of the Orthodox Church" in 2016; it is to be held in Constantinople and will be both convened by, and presided over, by Patriarch Bartholomew. Not only will this be an illustrious opportunity to deal with contemporary challenges, it has the potential to be the first official "Ecumenical Synod" since the last one was held in 787 in Nicaea to end the Iconoclast heresy.

As the Primates concluded their Synaxis by con-celebrating the Divine Liturgy for the Sunday of Orthodoxy in the Patriarchal Church of St. George, they preceded -- sacred icons in hand -- to a long balcony to proclaim by their participation the importance of unity, to proclaim the message of Orthodoxy and to proclaim the good news of God and His Gospel. In the background: the beleaguered yet venerable and revered Ecumenical Patriarchate of Constantinople.