Live in gratitude and never take it for granted. We're talking about life of course. It's not about what happens to you, it's about what you do to make something happen.

Be grateful, be transparent, challenge yourself and most importantly turn adversity into advantage, and then share your tale so the world can be moved and inspired.

Everyone has a story.

I am Mark Brodinsky and this is The Sunday Series. 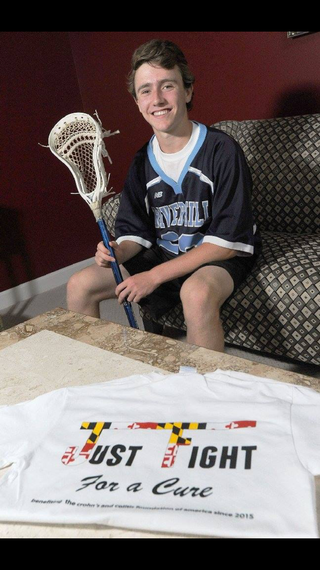 It's right there on the screen saver on his phone, the same message Jacob Friedman says he looks at about 100 times a day: God places the heaviest burden on those who can carry its weight.

For anyone fighting against a life challenge these are words to live by. For the 17-year-old from Clarksville, Maryland, the weight he carries has been the battle he is waging from the inside out: Crohn's disease. Jake is one of about 700,000 Americans dealing with Crohn's, a chronic inflammatory condition of the gastrointestinal tract. It seems everywhere you turn you hear of someone, especially those in their prime (Crohn's is most prevalent among ages 15-35), fighting to feel right every day of their lives.

For every person Crohn's can be a different animal -- for those reading this who have the disease or know of someone who does -- you live this first-hand. The consequences can become so severe Crohn's can claim a life, or leave you in a day-to-day existence of pain and in constant fear of the next attack.

For Jake, a stellar student and accomplished athlete, the diagnosis was another in a series of health challenges he's faced since he was young. Upon diagnosis of severe Crohn's Jake says, "the first thing I thought is 'oh gosh, not something else.' I haven't had the easiest life medically, I wasn't scared but in shock -- something else happening to my body." Since he was little Jake has battled back against food allergies, severe asthma and just a few years ago a lung infection that nearly claimed his life. But in every case, Jake has overcome, facing every health demon head-on. He is a three-sport athlete and a star player on his River Hill High School varsity lacrosse team, never allowing the Crohn's, including cramping and fatigue, to force him to miss a game, or a day of school. Jake took on a vigorous academic course load to earn a 4.0 during his most recent sophomore year. 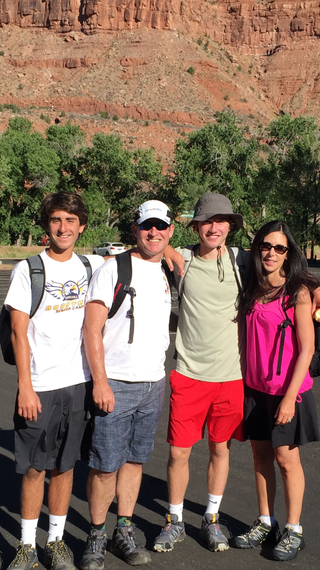 It's not about what obstacles life places in your path, it's about breaking through, your resolve, your spirit, seeing the glass as half full and perhaps the best medicine of all, the unwavering support of those who love you the most... your family.

Jake's parents, Rosanne and Paul, have elected to take the road less traveled in dealing with the disease, mainly focusing on a strict diet they learned about from their own extensive research into Crohn's and a strategy called SCD: Specific Carbohydrate Diet. This process allows Jake to forgo most medications and focus on food and what he puts into his body, to handle the day-to-day symptoms of the disease. So far it's been working and now Jake is working to make a difference.

Jake says: "Once I started to feel better, this opened up a lot of doors in my life, it allowed me to do other things. Crohn's is different for everyone, there are those who have it a lot more severe than I and others who are very sick. I started brainstorming about ways to raise money for them. The first thing that popped into my mind was t-shirts. The shirt I designed has a logo, (with Maryland Flag colors), on the front: JF For a Cure. JF are my initials but also stand for Just Fight. I started to advertise and market these shirts and donate 100 percent of the profits to the Crohn's and Colitis Foundation of America." (http://www.jfforacure.org/) 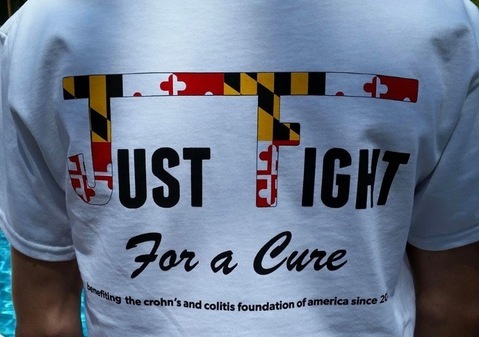 Jake has managed to turn his mission into a non-profit organization and so far, even with minimal marketing outside of word-of-mouth, Jake has sold enough t-shirts to raise $1,500 to be donated to the CCFA, (http://www.ccfa.org/). And as he begins to look at his academic future, Jake says he knows he will continue to spread the message. "Right now I'm looking at a lot of colleges," says Jake "and wherever I end up I will bring the Just Fight message with me to raise more awareness and money and hopefully help find a cure. I'm thinking about a career in the medical field, possibly even as a gastroenterologist."

And why not? Who better than someone who lives it first-hand, who knows what it's like to face the daily challenges of Crohn's, to become the medical professional who can help others along their way as they deal with the disease. Jake's mom Rosanne says its Jake's attitude, vision, determination and desire to give back that make him a winner.

"You think that your children learn the most from you, but I learn the most from him," she says. I think I've learned a lot about strength and perseverance. And I think he's taught me a lot about positivity, the glass half-full mentality and turning negative into a positive. He's taught me all that. Like Jake says anything is possible, just keep plugging away. He's amazing, he does it all. Despite his health battle he's social, he does very well in school, he plays sports, he volunteers. I'm really proud of him." 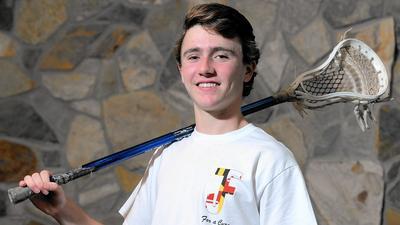 And then there is the special connection between mother and son. Rosanne recalls when Jake was dealing with health challenges even as a little boy, at age 2 or 3, he would ask her "why was I born this way?" She says she told her son, "God gave you this because he knew you could handle it." And it was the recent moment, years after posing these questions to his mom, Jake noticed a message posted up in his high school locker room. He sent the message to his mom in a text: God places the heaviest burden on those who can carry its weight.

"Oh my gosh," says Rosanne, "he remembers what I used to say to him."

The same message which is now part of Jake Friedman's mission -- carry the weight for others -- and Just Fight For A Cure.

Until next time, thanks for taking the time

(Order a Just Fight For a Cure T-shirt by e-mailing: jfforacure@gmail.com)

Now you can download and listen to The Sunday Series stories on iTunes! (https://itunes.apple.com/us/podcast/sunday-series-courage-inspiration/id1028611459)