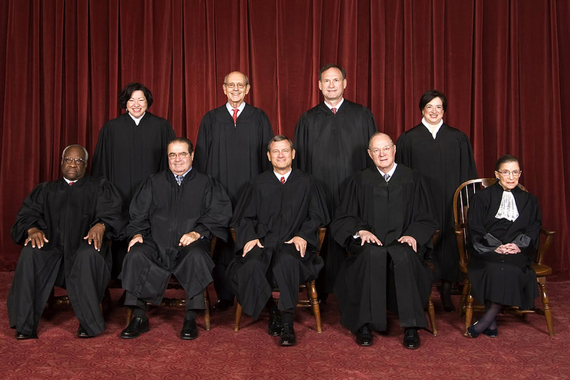 Did you know that 7.5 million people could lose their health insurance this week? True story. It's because of King v. Burwell, a case before the Supreme Court involving four tiny little words in the Affordable Care Act (aka Obamacare) that, if the plaintiffs are successful, could cause nearly 10,000 unnecessary deaths each year.

How is this possible? Let's go back to 2010 for a moment, shortly after Obamacare passed. A group of conservative lawyers, all having presumably wonderful health insurance, gathered to find a way to stop millions of mostly lower-income people from accessing affordable health care. Sponsored by the American Enterprise Institute, partly funded by the Koch brothers, they zeroed in on Section 36B, which covered how the marketplaces would work -- for an amazing reading of Obamacare, check this out. In describing who is eligible for the federal tax subsidies offered to lower-income people who can't afford the high premiums of health insurance, Obamacare refers to the marketplaces as "established by the State." Well, cut to 34 states refusing to create marketplaces, resulting in the federal government setting up an exchange for people in those states.

The thing is though, Obamacare foresaw states refusing to set up marketplaces, but it didn't foresee the four words "established by the State" to be used in a petty lawsuit stating that only people who live in states that set up their own marketplace can get the federal subsidy. If that's true, and the Supreme Court agrees, then the 7.5 million people in those 34 states will lose their subsidy, which is the only way many of them can afford health care in the first place.

So where are the 34 states that these 10,000 soon-to-be dead people live in? They are mostly Republican-controlled states, largely in the South. Oh, you probably should know that most of these states have the lowest access to preventive public health measures, meaning that if you're poor, the closest thing you've got to health care is Advil (but generic, because poor).

So why don't these people just move to a state that has marketplaces? Uh, have you ever rented a U-Haul? That shit is expensive, even with that free ladder they throw in.

Can't Congress just fix this seemingly small problem? Yes, very easily, but the current Congress is more likely to pass a resolution to have three-ply toilet paper in Congressional bathrooms than pass meaningful legislation that could help millions.

But you know what else, it doesn't just affect poor people (this is where all the old white people say, "Wait, did someone say I could lose money?"). If 7.5 million people lose their subsidy, and half of them can't afford their current insurance policies, then premiums go up for everybody!

I live in California, a state that fortunately set up a marketplace. My family lives in Missouri, a state without a marketplace. So there's a possibility that my brother, who happens to have cerebral palsy, won't be able to afford his insurance any longer. Which means he can't get the services he needs to like, live. All because of four little words. I mention this to stress how close to home this hits for millions of Americans.

Lawsuits like this feed into a pattern that is quickly becoming a cancer on the United States: the relentless attack on the working poor. This lawsuit and most of the rhetoric of those that oppose Obamacare is a blatant disrespect for lower-income Americans. Who are these Americans? They are families, college students in deep debt, people with serious health issues, senior citizens, first-generation Americans, single mothers, YOU.

Remember when you were a kid and your friend did something to make you angry, so to get back at him you went and did something petty? You probably felt bad about it afterward. It was mean and beneath you and hurt others unintentionally. Unfortunately for many conservatives, hurting 7.5 million people unintentionally just because they don't like President Obama isn't a big deal. Is it because he won? Because he's black? Because he sought to help millions of low-income people out there looking for something stronger than Advil? I'll let you answer this, because I'm too busy worrying how my brother will get the health insurance he needs to survive.

This piece was originally published on Thought Catalog.