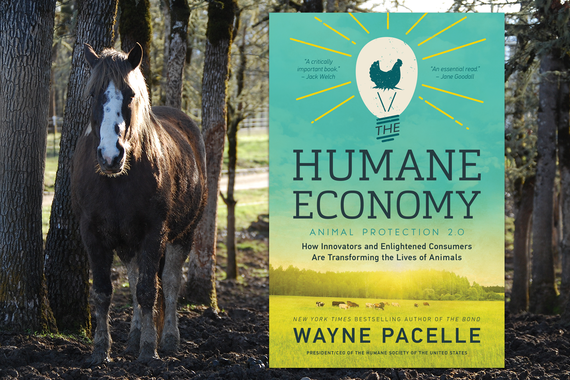 I'm excited to launch a national discussion with the American public about the work of The HSUS to address the real costs of cruelty and the great benefits of kindness, with the official launch tonight of The Humane Economy: How Innovators and Enlightened Consumers Are Transforming the Lives of Animals (the on-sale date for bookstores is tomorrow). Tonight, at 7 p.m, we will live-stream my book event at Politics & Prose with U.S. Senator Cory Booker and Washington Post award-winning columnist Kathleen Parker. Tomorrow, I'll head to Philadelphia and to Clinton, N.J., and then on to an event with New York Times columnist Mark Bittman on Wednesday evening at the Barnes & Noble in New York City. After that, I will travel to Connecticut and Boston, where, a week from today, I'll be doing an event with Michael Pollan, a remarkable writer and one of the leaders of the food movement. From there I head west for a series of other events across the country.

Already, Kathleen Parker wrote about The Humane Economy, as did the Washington Examiner's first-rate columnist Paul Bedard. I've also done a number of interviews, including with Kathy Blackwell of Niche Media (Philadelphia Style, Ocean Drive, and 10 other publications) that features a discussion between me and Whole Foods Market co-founder and co-CEO John Mackey. As you'll see from these pieces, I argue that we are at a turning point in our relationship with animals, and when we look at animal issues through an economic lens, there's a more compelling argument than ever to do right by animals. Businesses with animal cruelty baked into the business model face enormous risks, and those that embrace animal protection sensibilities position themselves for success and for the future.

We'll be announcing a national town hall meeting soon with Martha Stewart, and I'm speaking to staff members at so many of America's major companies. I recently spoke to the staff at PetSmart in Arizona, and I'll be paying visits to some of the biggest food companies in America and also talking to banks and other businesses within the financial services sector, because they, too, are increasingly playing a big part in the emerging humane economy. I've got so many exciting media appearances, and you can check my Facebook page for upcoming media appearances, so you can tune in. I'll be tweeting from the road too. You can also join our HeadTalker campaign if you'd like to help spread the word on social media.

Embracing animal protection is no longer a burden or a sacrifice. It's an opportunity for us as individuals to grow and to be empowered, and for businesses to grow and to connect with consumers.

As I say in the book, for those companies not embracing the humane economy, get a new business plan or get out of the way.

The humane economy is turning out to be an unstoppable force. But to make it hum, we'll need your engagement and commitment. Yes, there are still so many problems in our treatment of other creatures, and they face so many threats, but we are winning the battle of ideas and convincing the overwhelming mass of consumers that animal protection is a core value in our society. But change this big is not self-executing - it requires our full attention and focus.

The Humane Economy recounts so much progress we've made in so many different sectors of the economy, and forecasts where we go from here. We are taking measurable steps forward, and far from resting on our laurels, it's time for us to pick up the pace. Hope to see you tonight and in other stops on the Humane Economy national tour.

Watch a live-stream of tonight's event: