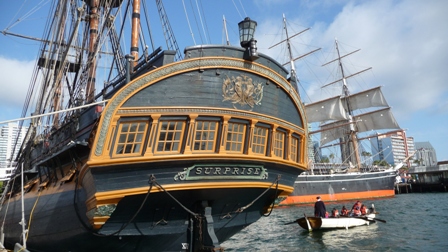 The HMS Surprise would be the most famous of all British frigate sailing ships, except for two things: It's floating in San Diego's harbor, and, of course, it never existed.

The Surprise is the fictional ship of Captain Jack Aubrey in the popular sea novels by Patrick O'Brian. For the Academy Award-winning film version of the books, Master and Commander: The Far Side of the World, 20th Century Fox spared no expense to recreate an authentic 24-gun frigate from the era of Nelson and Napoleon. 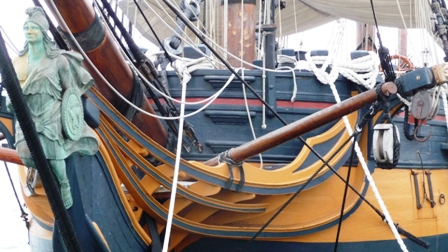 They started with a replica of a British frigate that had originally been launched in Connecticut in 1970 as the HMS Rose. After sailing her through the Panama Canal and down the coast of South America to the Galapagos Islands for the film, the ship eventually ended up at the San Diego Maritime Museum,, where it now floats beside an array of historic craft, including the Star of India, the world's oldest active ship.

They make for one of the most attractive maritime settings to be found in any city, and the accompanying museum is wonderful, filled with ship models, paintings and nautical exhibits, as well as a chance to walk the lower gun deck of the Surprise. As you crouch past the big guns, nicknamed Jumping Billy, Sudden Death and Wilful Murder, keep your head down to avoid bumping it on the low beams. The captain's quarters at the stern of the ship are much smaller than the stateroom showed in the film, but with the swaying of the ship underfoot, and a panorama of sea views from the windows, the effect is enough to get anyone's nautical blood pumping. There are photos from the film showing the Surprise in action, as well as some uniforms used in the movie. 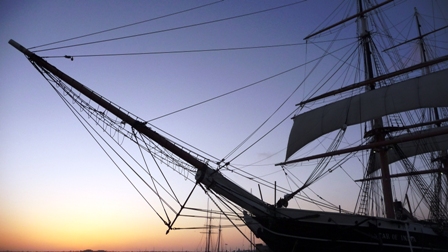 Bobbing next door is the 212-foot long Star of India. Launched in 1863, she made 21 trips around the world transporting emigrants to New Zealand, some of the voyages taking up to a year. While a sailing ship is a beautiful sight from shore, life aboard it was miserable for the emigrants, cooped up between decks, battling seasickness and storms, while living on a diet of hardtack and salted beef. The iron hulls of the Star are now filled with exhibits that illustrate the hardships of life at sea.

By 1926, the era of sailing ships was long gone, but the Star was saved by a group of San Diegans, and after 50 years of restoration, took to the sea once more in 1976. She sails now at least once a year, attracting crowds of up to a half million.

By comparison, the ferryboat Berkeley docked nearby seems tame, but she too has had a dramatic history. During the 1906 San Francisco earthquake, the Berkeley carried thousands of survivors to safety, the crew working day and night to carry passengers away from the burning city.

Also docked here is the Californian, a tall ship replica of the 1848 Revenue Cutter C.W. Lawrence that patrolled the coast of California during the gold rush days. Built for speed, the ship has 7,000 square feet of sails. It still takes people out to sea on educational programs, ranging from a half day to more than a week, offering a fleeting glimpse at the colorful era of sail.

The Maritime Museum is open everyday from 9 a.m. to 8 p.m. and is especially attractive at dusk. For more San Diego tour ideas, visit: www.WalkingAndDrinkingBeer.com