Sometimes the greatest food creations come from adapting to necessity, like when the Earl of Sandwich put meat between bread for a quick snack to get through long gambling sessions, or when KFC doubled down on Americans' need to be even less healthy.

Classic Italian-American food is no different. When immigrants began arriving on our shores, they couldn't find the right ingredients and were met with palates and traditions that varied greatly from those of their paisanos back home. They adapted their food culture to these new conditions, bringing forth a menu of dishes that might seem unfamiliar or downright confusing to native Italians. But on the other hand, some old traditions lived on even though the original context for the food was long gone.

To learn a little more about these dishes, we talked to Michael White, the NYC-based chef behind Michelin-starred restaurants like Marea and Ai Fiori, to fill us in on the backstories of some of the most iconic Italian-American foods. Read on to learn about the origins of garlic bread, meatballs, and pizza. 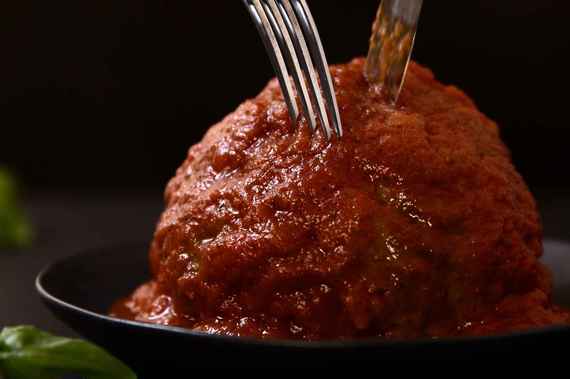 Meatballs
"In Italy, there's really no equivalent to our American meatballs. Italians do make polpette, but they're never as large as what you'll find here in the States. Polpette are made with veal, or a combination of veal, pork, and beef. When Italian-Americans introduced meatballs to the States, they started using what was available to them here, mostly beef and lots of Pecorino-Romano cheese. Over time, our culture has demanded they grow in size."

Lobster fra diavolo
"You'd never find this in Italy. People think it's Italian, because a plate of pasta topped with seafood is very Italian, but adding ingredients like tons of red pepper flakes, dried oregano, tomato paste, and copious amounts of alcohol are strictly Italian-American traditions, because we as Americans wanted things with more spice."

Chicken Parmesan
"You will only find eggplant Parmigiana in Italy, it's never made with veal or chicken. When Italians came to America, they had to make use of the local ingredients available to them. Meat is much less expensive in America than in Europe. So they had to adapt their vegetarian cuisine to our more meat-centric culture. Over time, as our eating habits changed and Americans wanted faster food options, the idea came about to put chicken Parm between two pieces of bread and make it a sandwich, so that people could eat it on the go. But you would never see anything like our chicken Parmesan sandwich in Italy." 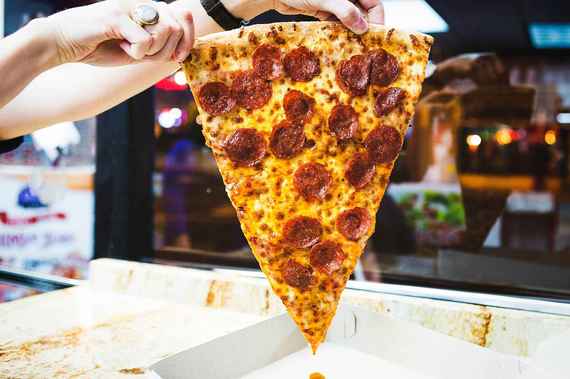 Pepperoni
"In Italy, pepperoni as we know it doesn't exist. Pepperoni is actually a red bell pepper. Italians will use salami picante or soppressata from Calabria, but those are all pork. The all-beef pepperoni you see in the US is more of a Hungarian tradition, it actually has nothing to do with Italy."

Folded pizza slices
"There was one kind of pizza that started in America, and it was very reminiscent of a type of Neapolitan pizza called portofolio. In Italy, they needed an inexpensive thing to take to eat at work, and they didn't have boxes, so they'd just fold it over and put it in their wallet. It was food on the go, the world's first fast food."

Bologna
"Oscar Mayer bologna, that's really mortadella. It's from Bologna, and it became very popular wherever Italians went. If you go to Buenos Aires or São Paolo, the mortadella sandwiches are huge. In Italy they're very thinly sliced. Real mortadella can look a little bit gnarly, so Oscar Mayer made it look more homogenous all the way through to be more palatable to Americans." 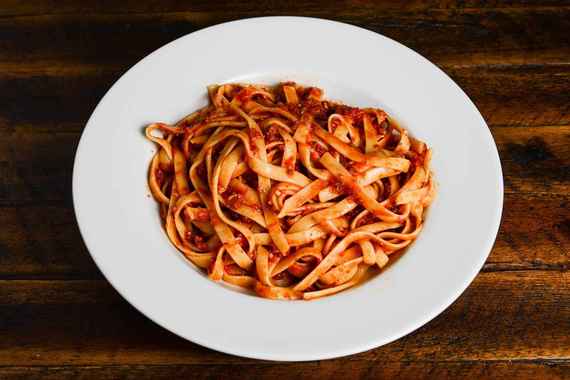 Huge pasta bowls
"In Italy, pasta is a middle course after the antipasto, then you'd have a small entree. It'd always be a small portion, but because we think of it as an entree, we've amped it up."

Dry pasta
"Dry pasta was such a hit in America because most of the first immigrants were from the South. The North is where you made pastas with chopped wheat flour and whole egg. When you'd see pasta made with eggs, that was a luxury."

To find out the surprising origins of 7 other Italian-American dishes, head over to Thrillist.com!