I am deeply hurt by the new book A More Beautiful Question by Warren Berger. Hurt because curiosity kills the cat and I shouldn't read a book about questioning because I could quite possibly end up dead.

Having read the book, however, I can attest that the complete opposite is true. I feel more alive than ever. Questioning -- or to be more specific, the art of asking "beautiful questions" -- is about living fully and opening your mind. In business, it is how the world's most breakthrough enterprises in the IT and tech industries start off. It can also be the key to success on an individual level. I went through this very process of deep questioning myself when I envisioned "movement marketing," wrote the book Uprising and started my own challenger ad agency StrawberryFrog.

At its core, Berger's new book, which hits shelves March 4 from Bloomsbury, argues that one of the most powerful forces for igniting change in business and our daily lives is a simple, under-appreciated tool -- one that has been available to us since childhood. This is the most profound business book I have read in a while. Why? Well, these days we're all hungry for answers, and Berger thinks we need to pay more attention to questions. Questioning can help us identify and solve problems, come up with innovative ideas, and pursue fresh opportunities. I spoke with Berger and asked him some of my own beautiful questions. 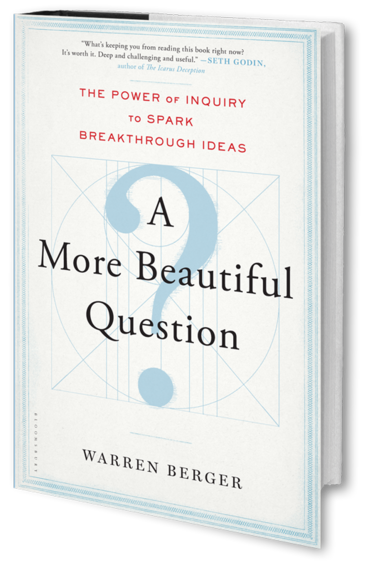 So, first of all, what is a "Beautiful Question?"

The term is inspired by this line from the poet E.E. Cummings: "Always the beautiful answer who asks a more beautiful question." The way I define a Beautiful Question in the book is: "An ambitious, yet actionable, question that can begin to change the way we think about something--and might serve as a catalyst to bring about change." For example, when someone steps back and asks, Why are we doing things the way we've been doing them the past 20 years -- what if we tried a whole new approach? That's a beautiful question. These kinds of questions challenge assumptions, and take a fresh look at things that maybe are being taken for granted. But the key word is actionable -- I'm interested in questions you can act on, to possibly bring about change. I make the case that we should all try to formulate our own Beautiful Questions and then take ownership of them--"How might I begin to do X or Y, to bring about a desired change in my life?". Generally speaking, a Beautiful Question cannot be answered quickly on Google--a different, much deeper kind of search is required.

Not necessarily. To get to the best answers, we have to begin with the right questions. Questioning is a critical starting point of problem-solving and innovation -- whether we're talking about business, social issues, or everyday life. Thoughtful inquiry can help us begin to see and understand the challenges around us more clearly. Questions also spark the imagination. And we're now learning that questions (versus declarations) can help us motivate ourselves -- while engaging the interest and support of others. Learning how to act on our questions can lead us toward solutions and creative breakthroughs. Einstein understood this; so do the people running Google and lots of other innovative endeavors.

Then why isn't questioning valued more? You say in the book that it is "under-taught and under-utilitized." Why is that the case?

Because we have an education and business culture that tends to reward quick factual answers over imaginative inquiry. Questioning isn't encouraged -- it is barely tolerated. In both classrooms and workplaces, questioning may be seen as a challenge to authority. And it can be perceived as a sign of weakness -- an indication that one "doesn't know."

But you also point out in the book that people who question tend to be very successful, in business and elsewhere.

Yes, the latest research shows that the most innovative business leaders -- the late Steve Jobs, Jeff Bezos and the like -- tend to question everything. And it is through constant inquiry that they find new opportunities. So this points to an interesting dichotomy, which I explore in the book -- society does its best to discourage questioning, but those who ignore that and remain inquisitive often end up running our most creative and successful businesses while coming up with game-changing ideas.

How does one tackle a subject as big and broad as questioning?

Questioning is like breathing -- it's something that seems so basic, so instinctive, that we take it for granted. But there's a lot we can all learn about how to question, and really do it well. So I sought out people who are "master questioners"--innovators, entrepreneurs, creative thinkers of all stripes -- who are known for raising questions no one else is asking and doing this as a practice. I found such people in Silicon Valley startups and innovation hothouses like IDEO, but I also talked to teachers, artists, basement tinkerers, and social activists who question conventional thinking daily.

I was also curious about what's going on in our brains when we question, so I interviewed leading neurologists. I studied the way comedians, in particular the late George Carlin, use questioning to challenge assumptions and see the world differently. And I spent time at a fascinating place called The Right Question Institute, where they are developing techniques to help children and adults become better questioners. All of this informed the section of the book that focuses on how to get better at asking Why, What if, and How questions.

The book is also filled with stories of breakthroughs that began with a question. What do you consider to be some of the more interesting examples?

The cell phone started with a question. So did the International Red Cross and the Olympics, as well as the Internet. Questioning gave us car windshield wipers and instant cameras -- the latter can be traced to the question, "Why do we have to wait for the picture?," asked by the 3-year-old daughter of inventor Edwin Land, who would later start Polaroid. Companies such as Netflix, Pixar, and many others can be traced back to a "founding question"--though my favorite, just because it's so odd, involved a college football coach who asked, "Why aren't the players urinating more?" That question led to the realization that the sweating players weren't replenishing fluids well enough, which in turn led to the creation of Gatorade and a $20 billion sports drink industry. So while it may have sounded like a weird question, it turned out to be a beautiful one.