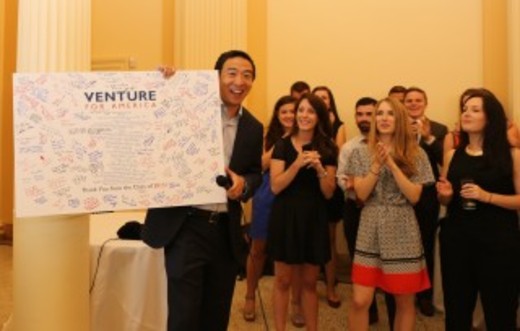 We are in a golden age of entrepreneurship. Young people are starting businesses in record numbers. Our culture is embracing risk-taking and innovation at the educational level and it's paying off.

Actually, none of this is true.

A recent Wall Street Journal article entitled "Endangered Species: Young U.S. Entrepreneurs" laid out the facts. Only 3.6% of households headed by adults younger than 30 owned stakes in private companies in 2013, a 24-year low. This figure was 10.6% in 1989 and 6.1% in 2010--a dramatic decline. Similarly, the proportion of people ages 20 to 34 who started a business in 2013 dropped to its lowest level in at least 17 years, according to the Kauffman Foundation, a big proponent of entrepreneurship.

The decline in entrepreneurship among young people is part of an overall decline in new business formation. The U.S. startup rate - the ratio of new firms to all firms - fell by nearly half between 1978 and 2011. The number of newly-founded firms shrank from 562,000 in 2006 to only 400,000 in 2010 and 2011 and has stayed there since. Reduced business dynamism was cited by the Fed last year as one of the big headwinds our economy faces.

So not only is this anything but a golden age of entrepreneurship, the trends among our young people are even more troubling. Even as we are bombarded with prominent images of young people starting tech companies, the facts tell a very different story. As McKinsey put it, "What's particularly disturbing is that the greatest decline in entrepreneurial activity [from 2007 - 2012] occurred in the 18-24 year-old cohort . . . The shortage of young business founders means that the U.S. economy is currently not producing enough of its next generation of serial entrepreneurs."

Why are fewer young people starting businesses? Some possible reasons:

1. Financial weakness. The financial crisis hit young people and recent graduates particularly hard - the average net worth of households under 30 has fallen 48% from 2007 to 2014 to $44,354. If you have less capital to risk, starting a business is less appealing.

2. Higher levels of indebtedness. In 2013, the 69 percent of college grads with student loan debt graduated with an average debt load of $28,400, much higher than in the past.

3. Consolidation. Industries of all kinds have been consolidating - from mass retailers and restaurant chains to community banks and construction companies. So now instead of competing with other mom and pop businesses, entrepreneurs frequently compete with large firms that have national brands and the cost advantages that come with scale. That may be deterring the creation of new firms.

4. Technology. People generally think of technology simply as a spur to start new businesses. But the Internet has also made it possible for more businesses to compete for any given opportunity. Back in the day, you could start a business that catered to local customers and it didn't need to be world-class - now you've got to be better than the best online option.

A lot has been written about the attributes and attitudes of millennials in the workplace - how they like to learn, crave more connectedness, disdain hierarchy, and care about making a positive impact on their community. You'd hope that the desire to be passionate about their work and have independence would lead to higher levels of entrepreneurship for the upcoming generation. Instead, the facts show lower appetite for risk and a paralyzing fear of failure.

Stillborn businesses today mean fewer jobs tomorrow. Fewer companies mean fewer opportunities for people who need them. A slow-motion economic trainwreck is playing out in front of our eyes, with downstream effects for decades to come.

The spirit of enterprise appears to be fading in the U.S. The pioneer spirit made our country strong for so long: "Build it and they will come;" "Can-do;" "Bring it on!" It all combined with world-class competitiveness and a potent work ethic. If we lose this we'll lose everything.

At Venture for America we've worked with hundreds of aspiring young entrepreneurs who want to build businesses and change things for the better. Over the past several years, 3,000+ college grads have applied to join Venture for America - we selected 300 who then spent up to 2 years working with existing companies.

Here are some things we've learned that can make entrepreneurship a more viable path:

1. Mentorship. Our Fellows spend time working with a more experienced entrepreneur to learn the ins and outs of building a business. In most every business, you learn by doing. The apprenticeship model is much more effective than the classroom for cultivating entrepreneurs.

2. Lower costs. Our Fellows relocate to help build businesses in cities with low costs of living. It's easier to take a risk and stretch resources in Detroit or Baltimore where you're paying $500 - 600 a month in rent than in New York or San Francisco.

3. Help with loans. Our donors and supporters help defray student loans for young people that start a business. That helps clear the path for them to take the challenge.

4. Access to technology. Every entrepreneur doesn't need to be technical - there are plenty of opportunities out there for people who aren't coders. That said, we provide training to help them become more tech-proficient and technology-savvy, and our entrepreneurs often work with technical people as co-founders.

5. Community and network. Entrepreneurship can be very lonely, so we create a community of Fellows who can rely upon each other for advice and guidance. We also have mentors and advisors for first-time entrepreneurs.

6. Investment and resources. We put money to work and also enlist outside investors. Our companies have raised $6 for every $1 our organization has invested directly.

Over 25% of our alums have gone on to start a company after 2 years (at an average age of 25), with an additional 50% remaining engaged in entrepreneurship as a manager or early employee.

If we want young people to start businesses, we need to put resources in place to help more of them surmount the obstacles.

Our young people aren't starting many businesses. It's up to us to figure out why this is and change it as fast as we can.