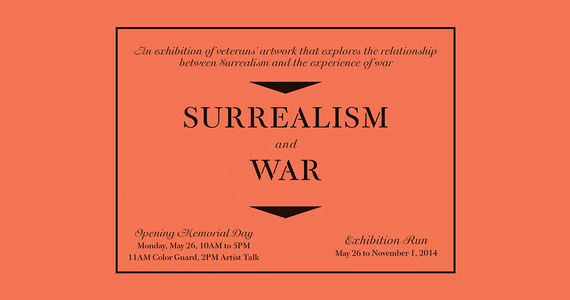 The first conversation Aaron Hughes and I had about art and war was around seven years ago -- about the modern dance class at Tufts University, of all things. Many classes were being cancelled for something called Walkout on War Day to protest the war in Iraq, and after much discussion about how, or if, to respond, the students decided to make a dance about war.

So on one of those gentle, spring days that make you glad you live in New England, they climbed the steps to the plaza in front of the library, where two other students were droning the names of American and Iraqi war dead. As the dancers assembled in five rows of four each, their faces went mask-like and solemn. In slow motion, they began to march: a knee raised to an unnatural angle, a wrist floating to shoulder height before billowing down in a graceful arc. Then, signaled by an invisible cue, the first row fell soundlessly to the pavement as the second row stepped over them and marched on. A minute later, the second row fell and lay there as the third marched over them, only to fall too, then the fourth, and the fifth, until everyone lay heaped on he ground in postures of death.

No one walking by stopped to look.

As the dancers got up, dusted themselves off, and headed back down the steps, I asked a kid in the class why he thought nobody even paused to watch. Wouldn't he stop if he saw something like that? I mean, it was nice dancing, if nothing else. Yeah, he said, he'd probably stop because he liked theater, but the other part, the politics or statement or agitation, that turned a lot of students off. They felt scolded or didn't want to get pegged as a tiresome "antiwar activist."

Made sense; who wants to be reduced to one note? But it still bugged me and I kept telling the story, hoping someone would help me figure out why it was so easy to ignore what I thought was a pretty potent piece of art and protest.

Finally, I told it to Hughes, an Iraq veteran and peace activist, who was then an art student in Chicago. He answered easily, as if acing an exam. Public protests are most effective when people don't know how to deal with them, he said, when they surprise us out of our assumptions and create a kind of mental itch that can only be scratched by digging deeper and deeper. "People respond to thoughts they can actually own," he concluded.

That's when I finally stopped telling that story.

Hughes was among the early artist-veterans using their experiences in Iraq and Afghanistan to explore the intersection of war, politics and art. He helped launch Warrior Writers and championed Combat Paper, the very cool process fellow veteran-artist Drew Cameron created to transform discarded battle uniforms into fine-quality paper. The art emerging then was confessional, provisional, profane and YouTube-anointed in the style of the day, but it was dissident art, meant to shake things up. It was also meant to convey what it's like to inhabit the skin of people who fought wars that stopped making sense to them about ten minutes in and left them feeling betrayed, bewildered, and abandoned.

Hughes's media are drawing, painting and simple but arresting events staged in public places he calls "situations." His intention, he told me early on, was to make connections. "We've built up all these cultural barriers and somehow we've got to poke through them. That's what I'm trying to do."

And he's still at it, which is one of the things I really like about Hughes -- this time as curator of "Surrealism & War," a major exhibit opening today at the National Veterans Art Museum (NVAM) in Chicago and running until November. The connection here is the use, intentional or not, of Surrealist ideas and methods by veterans of the wars this country has been steeped over the last 60 years. The show features the work of nine veteran-artists, plus lots of pieces from the museum's collection.

The Surrealists, many of whom were veterans of WWI, proposed that immersion in the irrational, anarchic and whatever bubbles up from who-knows-where could capture reality more accurately than rational thought does. It's no stretch to connect that to war -- with its barbarity, misery and hypocrisy, it embodies irrationality and psychic cacophony - and that goes for war culture too.

In an essay accompanying the exhibit, Hughes argues that while the typical American war story is a hero's story, the veteran's reality is more a series of disjointed, traumatic memories that don't make narrative sense. Quoting the Surrealist Andre Breton, he writes of a "turn toward the marvelous" that many veterans make as they try to create meaning out of the no-meaning in their war experiences.

The blockbuster --almost literally -- is Jim Leedy's "The Earth Lies Screaming", a 50-by 10-foot wall of muddied skeletons, a dead pigeon, a pair of children's shoes, and geese rising out of the darkness. Leedy, a Korea War veteran, now 83, and probably best known for his ceramic sculpture, recalls the day he went for a quick swim during a break in the fighting in water so calm it was almost a mirror -- only to find himself standing among hundreds of rotting bodies. That haunted him until he made the wall in 2000, when his nightmares stopped. (You get the feeling much of the art here emerged from similar haunts.) "It was Surrealism," he writes in his artist statement, "and it was emancipation from the fear and horror."

There's much more -- drawings, paintings, sculptures, collages in visions carnivalesque, nightmarish and gorgeous. It's the art of war's residue, offered up to those of us fortunate enough to know war only secondhand. So here's something else I like about Hughes' thinking: In "Surrealism & War," he's teased out the creative ways veterans have found to probe and expose their psychic wounds.

Mostly we do the opposite, framing trauma that comes from war as an individual disorder to be drugged down or tucked away or treated in private. The Surrealists may have been into a major head trip, but they also understood that the folly and contradictions in modern society that lead to us into war after war are communal and require a political response, as well as a psychological one.

"Today, in contemporary American society, the irrational experiences of war and resulting traumas are framed as individual psychological reactions to adverse experiences...." Hughes writes, "Leaving the historic problems that metaphorically and literally explode in service members faces to be reconciled in isolation."