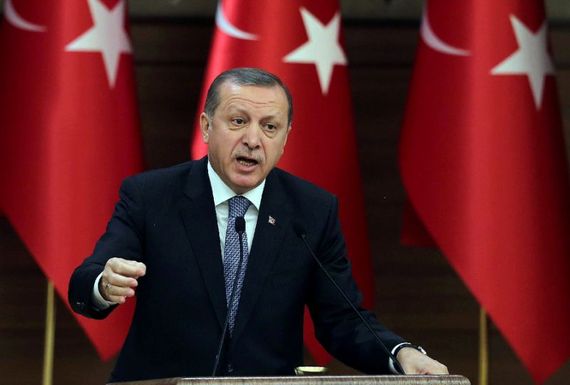 Several days ago, I was listening to Turkey's President Recep Tayyip Erdogan arguing that his presidential ambitions were not his personal cause. "It is about the future of this country," Erdogan said before a cheering crowd. He might actually be right. This is not only his presidential craving, but a gambit for the survival of his entire political enterprise.

The president, a supposedly ceremonial figure, has shown little flexibility in demanding more executive powers. Erdogan's unceasing campaign for the presidential system offers a vivid preview of what's next to come in this summer.

His presidential gambit has seen its share of twists and turns in the past two years. Erdogan initially projected that Kurds could be the kingmaker if he clings a deal with them. He therefore launched peace talks to end the perennial conflict. But this much-vaunted process shortly after was thrown into disarray. That plan fell apart when Kurds surprisingly surged in last year's elections, even costing the ruling AKP its 13-year single-party rule. Erdogan refashioned his strategy. He then turned to exploit opposition parties' shared phobia: the Kurds.

Erdogan resumed a relentless war on Kurdish rebels, pulverizing residential buildings and reducing entire towns to rubble in a conflict rampant with gross human rights abuses. Since AKP's poor showing at the polls last June, good news from Turkey has been in short supply. Nearly 500 members of Turkish security services were killed since last summer. Tens of thousands of civilians were forced to flee for their lives. This is a continuation of a war that has consumed Turkey for a generation and yielded nothing more than death, destruction and animosity.

But the war did its trick. The National Movement Party, the MHP, signaled that it is ready to continue cooperation with the government in "legal dimension." The statement was billed as an intention to support Erdogan's presidential ambitions in exchange for an intensified war against the Kurds. To sweeten the deal, the AKP is now drafting nearly a dozen constitutional amendments that will alter the president's position as a neutral national figure. The name of the new system is a "president with a party." With new amendments, if approved, critics underscore the risk of Turkey becoming a "party state."

According to the Turkish constitution, a president has to stay above the political fray, sever its ties with all political parties and remain neutral. Erdogan swore on his honor and dignity to do exactly that as he assumed the job two years ago. Erdogan himself admitted that he cannot remain oblivious to the party he built.

The proposed amendments will change this equation. Erdogan might be given a right to lead the ruling AKP. Scenarios in which an AKP leader challenges his authority, like the one with Ahmet Davutoglu, ousted prime minister, will hence disappear for good. AKP lawmaker Markar Esayan described this new plan as an "interim formula" until the political system switches entirely into the presidential system.

Erdogan argues that he is facing a quandary. "I am the commander-in-chief, but the army is under the government. I am head of the state, but the MIT is answering to the government," Erdogan lamented recently. MIT is Turkey's spy agency. He claims that the presidential system will be a harbinger of a new era, catapulting Turkey forward in every single area. His skilled political maneuvers suggest that the presidency could be within his grasp.

Erdogan's dream to become an executive president is not new. Last week, he acknowledged that he has been promoting the presidential system since he was the mayor of Istanbul two decades ago. The political game he was playing stretches back to his early years as the country's prime minister.

A little history would be helpful. Throughout his rule in Turkey since 2002, Erdogan has gone through thick and thin to eliminate his adversaries, clear his bumpy road to become even a more powerful politician while designing a system that only favors him and his establishment.

Erdogan's transformation of Turkey first started with accession negotiations with the EU in the hope of reforming the hostile judiciary, securing a chance to appoint loyalist judges and prosecutors. He then partially amended the constitution to mitigate the role of military in politics. At the same time, he cowed the press into submission while fashioning his own mouthpiece media outlets. He later purged sympathizers of popular Islamic cleric Fethullah Gulen, largely a reformist group, from the bureaucracy. Shifting into a presidential system will be a season finale of Erdogan's power grab series.

Opposition to him is fledgling. Scarred by the devastating war in predominantly Kurdish populated areas, the pro-Kurdish HDP is in shambles. The government has already co-opted the MHP. Only the CHP, another party, has remained a sole political opposition, expressing alarm over the looming Erdogan victory. CHP leader Kemal Kilicdaroglu's juggernaut has slowed down since the elections last year, and he pleaded for help. "Please, every one of you has to stand up to Erdogan and speak up," he told hundreds of businessmen at TOBB, Turkey's largest union of chambers and stock exchanges, on Tuesday. "Don't put the fight for democracy on my shoulders alone." His remarks drew appreciative applause from many of its members.

Once the champion of the underdog, Erdogan now realizes that the presidential system is the only way if the crumbling political establishment he worked so hard to build is to survive. From the business world to the media, the AKP empire will stand firm if Erdogan becomes a president. But his ambition for more power could spell his end. He has already stretched thin.