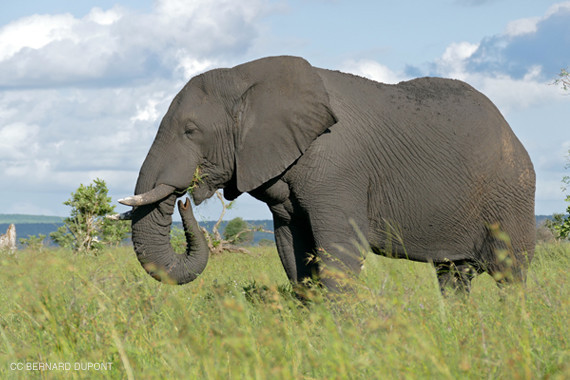 The elephants currently live in one of three protected parks managed by Big Game Parks (BGP), a non-profit trust, for the government of Swaziland, a tiny southern African nation bordered by Mozambique and South Africa. The organization says the areas are overcrowded with elephants, pushing endangered black rhinos closer to extinction, and has threatened to kill the 18 elephants if permits allowing their exportation are not issued.

But look at the facts and it looks less like a mercy mission than a lucrative business deal -- and a life sentence for the elephants.

BGP manages wildlife with little if any government oversight and has conveniently neglected to note that the total national population from which the 18 elephants will be extracted numbers about 35. Not to mention that the elephants occupy only small fenced portions of the reserves, posing no considerable threat to other wildlife.

Thus far, BGP has presented no evidence of significant habitat competition between elephants and rhinos. Nor has the organization demonstrated that it has made any effort to move the elephants to protected areas elsewhere in Africa, where they could continue to live free with their families. A recent article detailed various options that would allow the elephants to remain in Africa, including taking down fences, finding more land, or putting them on contraception. One organization has even offered to pay their relocation costs.

But it's in Big Game Parks' financial interest to close the deal. Under the agreement, the zoos will pay BGP a total of $450,000 for the elephants over the next five years. In exchange, each zoo will receive six elephants.

Big Game Parks will have to win approval for the deal under the Convention on International Trade in Endangered Species (CITES), the treaty that regulates international trade in wildlife. But it should be just a formality.

CITES requires its signatories to "designate one or more Management Authorities in charge of administering [the] licensing system and one or more Scientific Authorities to advise them on the effects of trade on the status of the species."

Conveniently, Big Game Parks CEO Ted Reilly serves both as Swaziland's Scientific Authority and its Management Authority, which means he will review and decide on BGP's export permit himself -- a clear conflict of interest.

This is not the first time BGP has used extortion to make money off elephants. In 2003, it sold 11 elephants to San Diego Wild Animal Park in California and Lowry Park Zoo in Florida, making a similar threat to kill the elephants unless the export took place. Despite offers from two reserves in South Africa and one in Mozambique to rehome the elephants, BGP refused to explore those options.

In late October 2015, 80 scientists; conservationists; and elephant care, animal welfare, and policy experts from around the world, including the Animal Legal Defense Fund (ALDF), signed a letter opposing the import.

"The proposed killing of elephants to maintain small numbers in equally small compounds in Swaziland is not sound conservation, nor is exporting them for display in zoos," read the letter. "It is possible that the 2003 transaction, approved by the U.S. Fish & Wildlife Service, created an incentive for Swaziland to persist in its poor conservation approach."

Many zoos' elephant programs are at a crossroads. Elephants are famously ill suited to captivity in zoos. No zoo can provide anything close to the amount of space elephants, who can roam up to thirty miles a day, need. Zoo exhibits are virtually devoid of the stimuli and challenges elephants encounter in a natural environment, partly so visitors can have an unobstructed view of the animals. Elephants in zoos have shorter life expectancy than those in the wild: they spend too much time standing on unyielding surfaces that eventually cause incurable, painful foot and joint problems, arthritis, and osteomyelitis (terminal bone disease), leading zoos to euthanize them, often in their mid-40s. Elephants who live in the wild are considered in their prime at that age.

At the same time, zoos' elephant breeding programs have been notoriously unsuccessful. Elephants reproduce poorly in captivity. Zoos spend large sums of money on repeated artificial insemination attempts that fail as often as not, and the calves who do result have poor survival rates. As a result, the population of elephants in U.S. zoos is dwindling faster than captive breeding programs can replenish it.

"Despite proof of the systemic failures of zoo practices and policies affecting elephants, the zoo industry has become more resolute in seeking out nations abroad from which to plunder elephants to restock zoo exhibits," read the expert letter. "This practice is an unacceptable consequence of the unnatural conditions provided by zoos, and should not be allowed to continue."

In contrast to framing the deal publicly as a rescue mission, the Dallas Zoo's 1,094-page importation application to the FWS states, "the primary justification for the import is captive propagation [of African elephants]."

CITES expressly defines captive breeding programs as "commercial activity" and prohibits the import of African elephants for such purposes.

The intended use of the 18 elephants is to bring fresh genes into the captive breeding programs that have proven unsustainable in U.S. zoos, not to bolster the species in the wild. All resulting calves will remain in captivity in the U.S.

Sedgwick County Zoo Director Mark Reed told The Wichita Eagle, "It's not a question of 'if' but a question of 'when' we will have young elephant calves born here...That's going to skyrocket the attendance like nothing ever has here before."

Nonetheless, FWS rejected a petition by the Animal Legal Defense Fund and a coalition of groups to extend the public comment period by 60 days to allow for full examination of the application. On November 23, ALDF joined PETA, Performing Animal Welfare Society, and captive wildlife attorney Deborah Robinson in submitting official comments, urging FWS to deny the Dallas Zoo's permit application.

By rushing through a less-than-transparent permit process, FWS is setting a dangerous precedent. At a time when the U.S. should be helping African nations preserve and defend their embattled wildlife, the government appears to be acting as a broker for questionable business deals.

And, perhaps most disturbing, the most important aspect -- determining what is in the best interest of the elephants themselves -- may figure only nominally in the final decision. Animal Legal Defense Fund will examine all available legal avenues to ensure the elephants' interests are considered.