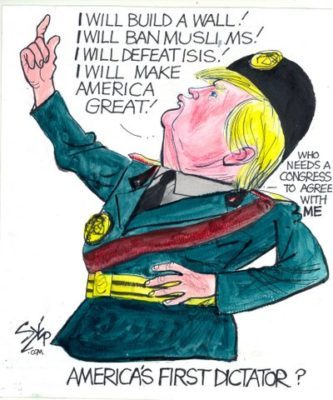 It all began with Donald Trump sizing up his own swinging dick through the assessment of his most beautiful, yet tiny, hands. That's when Swinging Dicks took control of this election cycle, which has become a full-scale assault on women everywhere.

So you'll have to excuse me if what I'm writing seems... dirty.

America is choking on swinging dicks.

Trump was exposed on an "Access Hollywood" tape admitting that "grabbing them by the pussy" is his preferred handshake for women. That was topped when Trump claimed to have never done anything to women because he respects them so much. The Lie That Would Not Stand has caused Trump's chances of being president to vanish and it's because conservative women don't want this swinging dick in the White House.

The latest accusations of Trump's out of control swinging dick has Donald once again caught on tape sexually harassing a woman.

Then there is Anthony Weiner, a proud member of The Swinging Dick Club who has sullied the storyline for the first woman to come close to the presidency, who is still fighting to be elected. Weiner's swinging dick proved so unwieldy that he also wounded the first woman presidential nominee's top aide.

.@BretBaier emails Chris Wallace while he's on air: Weiner has given FBI permission to search computer so no warrant needed. @FoxNewsSunday

Can we possibly forget to mention William Jefferson Clinton? The only Presidential Swinging Dick, who sauntered onto Attorney General Lynch's plane in the middle of Secretary Clinton's email server investigation. The outcome of which was that Lynch basically abdicated her role in the Clinton email investigation to Comey, saying after the furor erupted that she'd abide by Director Comey's judgment.

This led to the most unlikely, and powerful, swinging dick of the moment, James Comey. He not only made a public statement when he said there was no way any prosecutor would indict Clinton; it was a statement which was unprecedented. WJC's penetration of Lynch's plane likely led the Director to ignore the 60-day suggestion in FBI guidelines, but also to act like he was blindfolded, bound and gagged when A.G. Lynch advised him not to send out the letter to congressional leaders about swinging dick Weiner.

FBI has “no idea” what is in these emails, Pete Williams says, signing off

The Swinging Dicks in this election cycle are now legendary.

Ask Kellyanne Conway, the first Republican woman campaign manager who's been ignored by her candidate because... She doesn't have a swinging dick.

Rudy Giuliani, whose jealousy of Clinton's position, and the collapse of his own career, has caused him to upend his own reputation.

Serial adulterer Newt Gingrich sent a confirming message to all conservative women, many of whom are rethinking their Republican loyalty and what they've gotten for it, when he insulted and demeaned Megyn Kelly. Trump applauded his performance had the added benefit of reminding all women of how their Republican nominee feels about women.

Then there is the swinging dick with the longest reach, Vladimir Putin. With Trump's bromance with this foreign adversary something Ronald Reagan would have been appalled to watch. Putin and his security forces have not only hacked into our election, but Russia and their allies have played such an outsized role in 2016 there are rumblings and reports the Trump campaign has caught the attention of the FBI.

Remember Paul Manafort, the swinging dick who was caught sucking up to Ukrainian thugs?

Can we ever forget Corey Lewandowski, the guy who manhandled a woman reporter while his boss looked the other way?

Then there are the Trump crowds, who were so threatening towards NBC's Katy Tur that she had to be escorted from one of Donald's rallies.

What we're seeing is the patriarchy of all-white males rise up and revolt over one thing: The possibility of a woman president.

To The Swinging Dick, it doesn't matter if Hillary Clinton is the most qualified person to ever get this close to the presidency.

The problem is HRC doesn't have a swinging dick.

That's the Republican Party today: swinging dicks and second-class women who support them because they have nowhere else to go.

That's why this election may cleave away women from the Republican Party for some years to come if the civil war to follow on the right doesn't neuter The Swinging Dicks who are working very hard to keep a woman out of the White House.

FBI Director Comey's actions make The Swinging Dick theory of 2016 clear. He ignored his female boss. He ignored fairness towards the first woman to be this close to the presidency, Hillary Clinton, in favor of attempting to cover the FBI's ass so they wouldn't be blamed after the election.

Women of all political stripes, including those not crazy about Clinton, are hoping one thing.

That we're about to see the very last of The Swinging Dicks of 2016. It cannot come soon enough.

The GOP has had a problem with single women voters for years; now married women will likely walk on the party as well. Beyond the election, Republican women will need to decide whether they really want to be Republicans. It's increasingly hard to imagine independent, professional women -- really, any women -- remaining in a party that is so rife with abuse and disrespect, so reminiscent of old-boy networks 30 years out of date. It's not even clear what the party could do to purge itself of the misogyny. - Jennifer Rubin [Washington Post]