Nike was founded by upstart running geeks and has evolved into a $30 billion sporting conglomerate. But running, and a runner, are upfront once again. 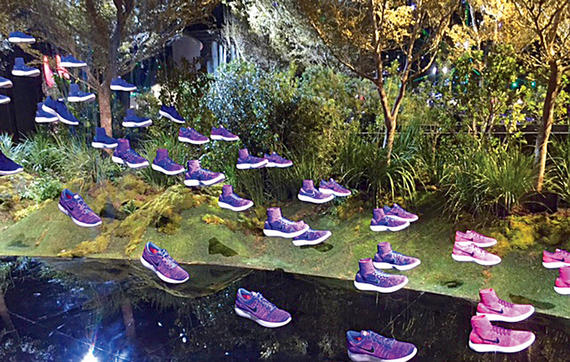 Flyknit, a $1 billion franchise, on display in New York City.

In March, I was among hundreds of journalists from around the world who attended a Nike running summit in New York City called Innovation for EveryBody. I've been to lots of press events over the years, but this was on another level: an arena-sized setting, pulsing lights and music, SRO crowd replete with celebrities like Kevin Hart and track star Allyson Felix.

Then there was the array of products the company unveiled: a self-lacing shoe designed by the legendary Tinker Hatfield; a preview of the VaporMax, the next generation of NikeAir technology; and the Zoom Superfly Flyknit track spikes designed for Felix's distinctive biomechanics (she'll wear them in the Olympics this summer). There were also new soccer cleats, basketball shoes, lines of performance apparel, and upgrades to the Nike+ app. The idea behind it all, said Nike CEO Mark Parker, is to "serve athletes at every step of their athletic lives" and to "bridge the gap between elites and regular athletes." The overall vibe was that of a moonshot that, well, swooshed.

At the time, I had just started reading a new book by Phil Knight, who cofounded Nike in 1964 with Bill Bowerman, his former track coach at the University of Oregon. Shoe Dog is a terrific read, in large part because it paints such a vivid contrast between the $30 billion juggernaut Nike is today and what it started out as: an upstart shoe importer kept afloat by diehard running geeks selling product out of the trunks of their cars. There are several larger-than-life characters in the Nike origin story, none bigger than Steve Prefontaine, who ran at U of O a few years after Knight did. Our excerpt from Shoe Dog explains how that stubborn, gifted frontrunner became one of Nike's first celebrity endorsers as well as its North Star. The way Pre ran the 5,000-meter final at the 1972 Olympic Trials on his home track in Eugene, and the way the crowd reacted to his epic effort, inspired Knight. "I knew that race...would forever be part of me, and I vowed it would also be part of Nike," Knight writes. "In our coming battles...we'd be like Pre. We'd compete as if our lives depended on it."

This win-at-all-costs ethic may explain why Nike's rise to dominance--it commands 40 percent of the $52 billion global athletic footwear market; Adidas is second with 18 percent--has been inspiring and polarizing. There have been controversial labor practices overseas; criticism of the 23-year, $460 million sponsorship of USA Track & Field that gives Nike ownership of Team USA uniforms; and allegations of doping at the Nike Oregon Project, run by Alberto Salazar (who has denied the allegations). There has also been a perceived lack of focus on core running at the company over the years, which may account for why Brooks, not Nike, is currently number one at specialty running stores in the U.S.

However you feel about the company, there's no denying its formative impact on running, both the elite sport and the everyday fitness activity. "If you have a body, you are an athlete." That's an empowering motto, and the ambition of the company's latest products support it.

Recently I've been testing Nike's new LunarEpic. With a seamless ankle-length Flyknit upper and laser-cut midsole and outsole, it's one of the most innovative shoes I've ever worn. In New York, I asked Parker what Bowerman, who famously assembled the first nubby-soled running shoe by pouring liquid rubber into a waffle iron, would have thought of it. Parker laughed and said, "Bill was a minimalist--the less shoe, the better. As far as competition goes, he was absolutely right. But we didn't show everything today. The Olympics will be quite special, and what you'll see in Rio would make him incredibly proud." Wait, there's more? I asked him to elaborate, but he cagily declined.

Parker, who ran competitively at Penn State and used to do several marathons a year, deserves credit for Nike's renewed focus on its original mission. "We are a big company that's in many categories," he said. "But running is our heart." He joined Nike as a shoe designer in 1979, and he believes that the most lasting and inspiring way into every athlete's heart starts from the ground up.

David Willey is the editor-in-chief of Runner's World.