Five years ago, we were told not to have high expectations or ambitions in Syria. It seemed that we had a roof over our heads to remind us where our place was. We were living without even having the chance of hearing our own voices or realizing our dreams.

Looking at life in Syria back then seemed normal on the outside, but within we had detention chambers drowned in darkness. Places that might reach ten floors under the ground.

You were safe if you lived without thinking, but if we thought and then dared speak our minds, you'll be lost in darkness. So, yes it was a normal life on the surface!

For 45 years, everything in Syria was under the control of one family. We had Assad, both father and then son. The suppression was increasing and people out of Syria thought that the severe oppression would prevent Syrians from making demands.

But one day, we witnessed Egypt toppling the regime of Mubarak which ruled Egypt for almost three decades. I still remember that day clearly, the February 11, 2011. The people of Egypt succeeded in overthrowing the regime that held it for three decades.

The windows in our house were closed that day by my mom; she was fearful like any other parent in Syria. My mom always told us not to have any political discussion with anybody out of the walls of our place. My mom closed the windows and started dancing, clapping and ululating. In Arab countries ululation is commonly used to express celebration - that day we celebrated the feeling of freedom in our house for the first time.

Many people thought at the beginning that the Syrian revolution is a copy of the other revolutions in the Arab world, but this is false. Syria was a very specific situation which pushed the people to be unintentionally ready for a change which was demanded years ago. People had been fed up with injustice and all the regime needed to do is make one more mistake.

The regime's intelligence branch in Dara'a, Syria, arrested a group of young school students who wrote on the wall of their school similar slogans to the ones previously used in Egypt and Tunisia demonstrations.

Despite the fact that they were children, the regime's intelligence members are not the right people to show some mercy. The children's bodies were burnt in some parts and their nails were uprooted.

The revolution started since then and the Syrian people were clear with their demands. They said it out loud and clear " Enough with Assad " in hundreds and hundreds of demonstrations around Syria. The peaceful demonstrations were responded with live ammunition from the regime and hundreds were arrested in the first four months and dozens killed.

The road was severely tiring and long for Syrians but the expectations were extremely high in the first year. Syrian people thought that the regime will be under the international community pressure to leave after seeing nearly one million demonstrators demanding for change. 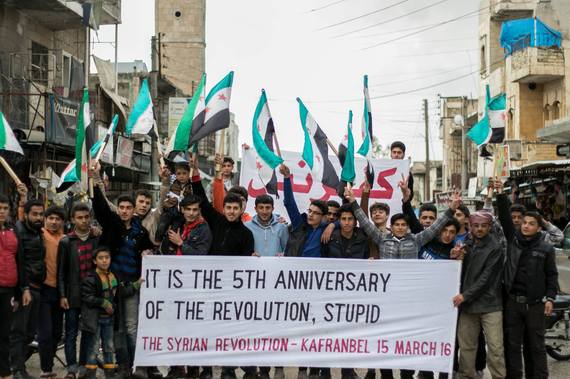 As time passed, the regime had almost the complete comfort to react violently to the peaceful chants. The regime's brutality increased and many massacres were committed in different Syrian cities and towns.

The number of political detainees reached unbelievable numbers. Syrians raised their voices again and again but the international community did nothing serious to stop the bloodshed. Some Syrians lost hope in getting any international support, so the Free Syrian Army was established by officers who quit the regime's army, the ones who refused to join the regime that was committing war crimes.

Since the middle of 2012, the regime was even more creative with human rights violations, so the regime put many areas under siege and the starvation was used as a weapon of war, barrel bombs and all different kinds of aerial shelling were used and nobody could imagine that things could get worse, but then the chemical massacre happened about 7 kilometers away from the middle of capital.

More Syrians were killed by the coalition, which was established to fight ISIS and extremism. Then more were killed by the Russian airstrikes and openly Iran and Hezbollah were there to support Assad from the very beginning in 2011.

Five years have passed and everybody is trying to cover up what really happened and is still happening in Syria. They want Syria to turn into black and then they can be satisfied with their scenarios about extremism and Syria being a field for a civil war, but they are not going to be able to hide the truth which is as clear as the sun.

Syrians, in their long journey to get their rights have witnessed disappointments, loss, and a lot more. Syrians have got the chance to know each other and they have seen the good parts in them and on the other hand, they were able to see the real faces of the world.

Syrians are not the victims that everybody wants to take over and manipulate their fate. They are not only the people who are being killed to be dealt with as numbers like "the number of people [who] were killed by shelling, the number of Syrian refugees [who] drowned in the sea and the number of detainees." Syrians are still alive and they still want what they have asked for in 2011.

Syrians are the doctors in the field hospitals who are keeping Syrians alive. They are the Syrian civil defense workers who are risking their lives to protect others and they are the citizen journalists and reporters who are doing their best to highlight the truth.

Syrians are the civilians who are sharing their last amount of food under siege and shelling. Syrians are the teachers who are volunteering to teach the children under siege and doing their best to feed their minds even though they can't feed their stomachs. They are the refugees who are still holding Syria inside their hearts wherever they are going and trying to show the best in them to the whole world. They are all still believing in peaceful resistance after all the violence they were forced to witness. The Syrian people who needed to get their chance, the chance that they have never had.

Two weeks ago and under the ceasefire, the demonstrations shouted out from underneath the rubble all over again. The aerial shelling stopped even though the regime violated the ceasefire in different areas multiple times. But that didn't prevent people from chanting all over again for dignity and freedom. 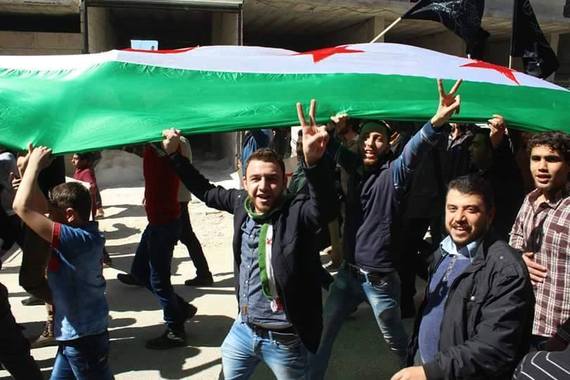 The revolution flag was all over Syria for the last two Fridays, and the black flags that the regime and regime's supporting entities wanted to look like as if they belong to the revolutionaries just disappeared!

The color that they tried to make Syria stick to for the last 3 years was demolished in two days and by hundreds of peaceful demonstrations. The Syrian revolution is still alive against all the faces of oppression in Syria. And if you are not able to see it after all, that would be because you don't want to.

The article is available in German here. 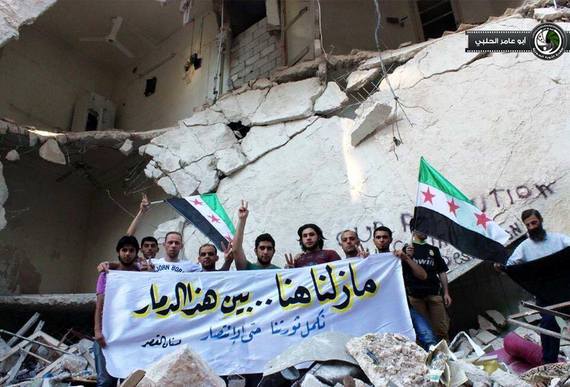 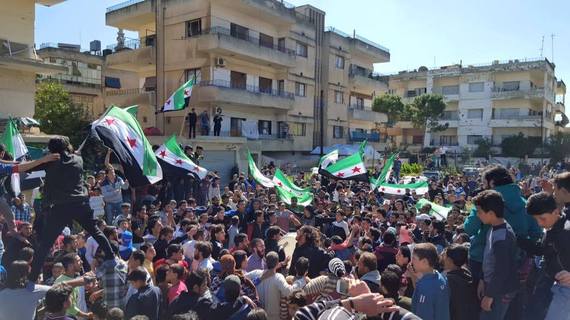 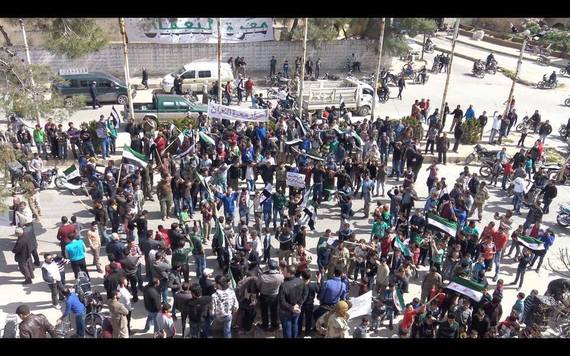 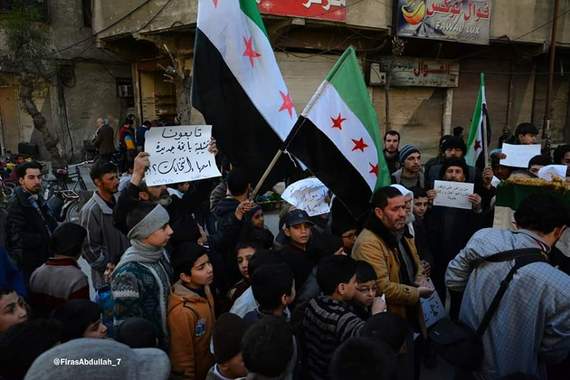