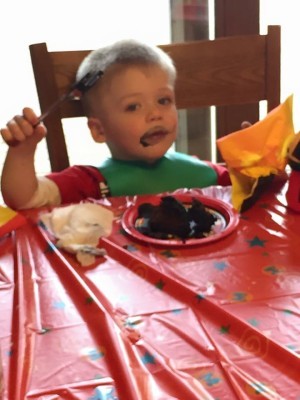 Parenting is being relegated to eating anything with an ounce of taste at the back of the hallway, with the lights off, especially if it is not what my son is eating at any given time.

My 3-year-old can eat a lot, but when it comes to the basics, he's no different than any other toddler, which is to say that his least favorite meal is the one that is in front of him. Toddlers have a way of turning you into a short order cook. Then, there are the other impacts of sweets right before bed for a toddler:
In order to prevent these things from happening, and in order to prevent the glaring look from a mom struggling at mealtime, I grab my after dinner treat and make my way to the furthest point in the house, careful to be stealth. When kids get older, they're the ones who do the sneaking around. But in the formative years, it's the parents.

The other day, I disregarded my own advice and sat down with a piece of my son's leftover birthday cake while he was still eating his peanut butter and jelly sandwich for lunch. Before I could get a bite into my mouth, my meal partner became extremely vocal.

I don't advocate lying to your children. I don't advocate it because it's a necessity, and I'm sure any parent of a toddler has done it at some time or another. When toddlers ask a question, there's generally a 100 percent chance that the anticipated answer is going to set them off.

It's also worth noting that mashed potatoes are Jamie's least favorite meal. When we explained the concept of Thanksgiving to him, and what would be on the menu, he followed up with "No like mashed potatoes," every single time.

So would a toddler just accept that I'm eating his least favorite food, no questions asked?

"Noooooo," I had been made. He knew I wasn't preparing to stuff my mouth with his least favorite Thanksgiving delicacy.

"That looks like birthday party." Party, cake, find the hidden meaning in a 3-year-old's sentence.

"You had your birthday party a few days ago!" I had caught him on a technicality. But I had also lengthened his meal by an extra 20 minutes. That's how long he was stuck on party.

I have a huge sweet tooth, but it's something I'm learning how to keep in check. However, sometimes I still enjoy ending my meal on a brief, sweet note. Unless I want to wait an hour for him to finish his meal, or two hours for him to go to bed, I need to find some ways to stay sneaky.

I'm thinking about setting up a temporary table at the end of the hall. It'd have to be small to fit there, and to easily be thrown into the third bedroom when not being used. It'd make for a good dessert table. I'd eat in the dark, and in the extreme quiet. But best of all, I'd eat in peace.

More:
ToddlersKidsParenting Parentsparenting tips
Newsletter Sign Up
Raise the kind of person you'd like to know
Subscribe to our parenting newsletter.
Successfully Subscribed!
Realness delivered to your inbox

Exploring fatherhood one dirty diaper at a time at <a href="http://spiralingupwards.com>SpiralingUpwards.com</a>.