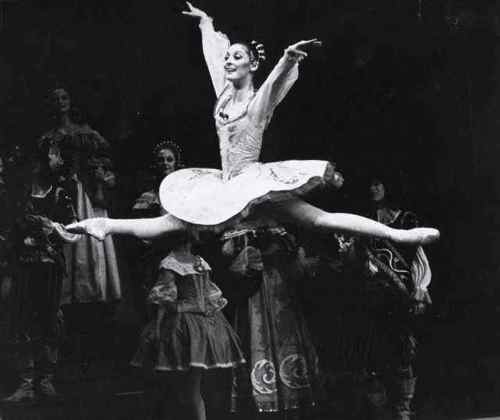 Although it's been nearly four decades, I remember like it was yesterday: standing in line with my friends at Lincoln Center by 7:30 AM to get standing room tickets to see Cynthia Gregory dance. She was an American Ballet Theatre superstar at the time, and no matter what she performed (but especially when partnered by Fernando Bujones), we were ravenous to dwell with her in the magical world she created onstage.

Ms. Gregory's assured technique, especially her balance, was legendary. Solid like a statue with a beating heart, she would take an attitude line en pointe and hold, hold, hold it as we held, held, held our breath only to exhale when an ever-so-slow extension into arabesque was complete. Then we exploded into rock-concert-fan-screams; a cacophony of bravas and oh-my-gawds.

Yet, as wonderful as these heart-stopping moments were, they never came at the expense of Ms. Gregory's characterizations and musicality. Rather, she used her technique as a means by which to express whatever character she was portraying. She was a true ballet artist of the narrative ballets.

Unfortunately, in these days of what appear to be an Olympian approach to ballet, such ballet artists are hard to find. And sadly, many ballet schools and major companies do not seem to be doing enough to preserve ballet's greatest asset -- its ability to transcend words and transport an audience into their world. Ballet technique that explodes with meaning instead of fireworks is vastly lacking.

This is due in part to the thriving dance competition scene -- one of the most prestigious is Youth America Grand Prix, which was featured in the recent movie First Position -- and, more broadly, to the human nature of always wanting more. Many of today's ballet students believe that the main goal of their training is to achieve higher extensions, bigger jumps, and more turns. As they obsessively view ballet wunderkinds on YouTube, ballet companies respond to the demand for ballet pyrotechnics by promoting hyper-technical dancers without much coaching on the subtleties necessary to make great art.

Thanks to YouTube, we can take a closer look into this dilemma. Below is a video of Ms. Gregory performing the Rose Adagio from The Sleeping Beauty in the late 1970s. In it, she illustrates a ballerina artist who uses impeccable technique to provide a deep connection to her character, the 16-year-old Princess Aurora. In the scene, Aurora is meeting her suitors for the first time.

Ms. Gregory's portrayal clearly shows Aurora's growth in both comfort and joy as she gains confidence dancing with her suitors. Ms. Gregory's pitch perfect technique is in perfect harmony with the story and the music. Her nuanced gestures grow larger as Aurora's confidence does. And, at the end, there is that arabesque extension -- slow, controlled and deliberate. An enraptured ending to a demure beginning.

It is interesting to compare Ms. Gregory's performance with that of the well-regarded Alina Cojocaru, a current principal with The Royal Ballet. Here, in a video of the Rose Adagio filmed relatively recently, one sees the very capable Cojocaru with her beautiful extensions and high retirés in her pirouettes, which is popular today (and something that I do love). Yet there is very little attention to showing the audience who she is and from where she came.

There is much to discuss in these two performances, but a few differences really stand out to me: First, with regards to the recurring motif of développés in à la seconde, Ms. Gregory's initial partnered ones are modest and slow. As the dance continues, Aurora becomes more assured -- her confidence grows and so too does that step in energy and abandonment.

Yet, Ms. Cojocaru's extensions in that same step begin high and bold. Since a dancer has only her body to tell a story, doing these high extensions with men whom she's only just met strikes me as behaving less like a princess and more like the floozy in the kingdom. Where is the restraint necessary for the characterization and how can we be pulled into her world without it? Remember, the ballet takes place in the 19th century, which is when Marius Petipa choreographed it. A 16-year-old princess sheltered by her parents due to Carabosse's prickly curse would have not been nearly as worldly as a girl of that age today. Wouldn't we appreciate those extensions so much more if she kept them more hidden until the appropriate time to let them fly at the end?

Second, with regards to the bourrée turns the ballerina does solo center stage, Ms. Gregory's are born out of total bliss, each turn more gleeful than the next. Ms. Cojocaru's on the other hand, end in static poses, which appear to be aimed more at showing off her lovely arched back rather than her happiness of an impending engagement. The bourrée's themselves are aggressive, exaggerated, and fast -- a quality more suggestive of the Black Swan rather than the over-protected young Aurora.

Finally, Ms. Cojocaru's overall dancing in the video is spiked with an "Audience, look at me!" attitude and a bouncy anything-but-adagio quality. (Isn't it called the Rose Adagio for a reason?) Ms. Gregory's dancing, however, is for her suitors rather than for her fans, her joy at being the young lady of the moment palpable. At the end, her Aurora remembers that she is supposed to have decorum and she returns to her initial restraint for her final bow to them. Ms. Cojocaru ends in a bow even lower than her suitors, which makes no sense to the story.

Ms. Cojocaru has many lovely characteristics. Her lines are gorgeous; her jump is light and high. I enjoy watching her. Yet, I am I am nostalgic for ballet artists like Ms. Gregory who made me forget that I was watching ballet steps. Certainly a great actress would not want me to focus on her diction.

I have had the honor of watching Ms. Gregory pass her artistic vision on to my school's students when she coaches them during its summer intensive. The first question she asks each one is, "What is the story about and who is your character?"

Thinking deeply on these questions can make a very big difference in whether a dancer is an artist or merely a technician. Every single step must have meaning; every port de bras a gateway to the soul. In today's world of increased technical prowess, imagine what ballet would be like if more coaches asked these important questions and most importantly, if more directors demanded the answers.

For a recent article on Cynthia Gregory see here.