This really is the best cauliflower fried 'rice' you'll ever taste!

There must be literally hundreds of paleo fried 'rice' recipes all over the internet and as much as they all look and probably taste good, with a penchant for food with full flavour, I decided to share my own version of cauliflower fried 'rice' which is just the bees knees..

This version is an adaptation of a beef and vegetable fried rice that a dear friend, Christine introduced to me a long time ago when we both lived in Cheshire and to be honest, I've yet to taste a rice dish that comes even close to her fried rice.

At the time, we would use long grain, easy cook rice but since discovering that my body and mind don't take too well to carbs, I've long since substituted the rice for cauliflower and never looked back. 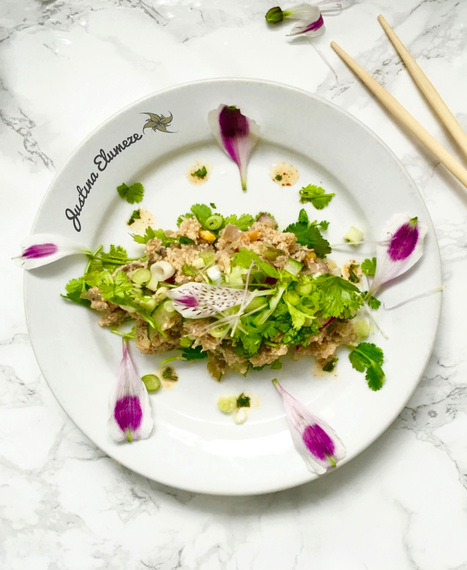 I still make Christine's original fried rice for my children but just before adding the rice and fried beef to the cooked vegetables almost at the end, I take out some of the vegetables and set aside to make my own cauli 'rice' version.

This delicious recipe is made by cooking the beef with garlic, onions and seasonings until the beef is literally as soft as butter and a rich, thick gravy is formed which is then also used to add even more flavour to the rice when frying.

It truly is something else and to be honest, so as not to exclude anyone from tasting for themselves how good this recipe is, I may go against my paleo values and give variations on how to do the recipe for those eating plain rice!

The Tastiest Cauliflower Fried 'Rice'... Ever!

Finely chop 1 red onion, 3 cloves of garlic and half the ginger and add to a small pot.
Remove the beef from the packaging and rince in cold water before adding to the pot.
Add 2 stock cubes, the mixed herbs, black pepper and all purpose seasoning to the pot and pour boiling water into the pot, just enough so that the water is covering the ingredients and about 1 inch higher than everything.
Cover with a lid and allow the meat to cook on the lowest setting for approximately 20-30 minutes, until thoroughly cooked and a lovely, thick, rich gravy is formed. (Check and stir halfway through). Ensure that you remove from the heat once gravy is thick enough and do not allow the gravy to dry out or the meat to burn.
Once the gravy is formed, remove the beef from the gravy and, setting the gravy aside, heat the oil in a large frying pan/wok until hot.
Fry the beef for a few minutes until browned (don't worry if the meat is falling apart due to being deliciously soft as this makes the dish even better!)
Remove the beef and set aside.
Add the remaining onions, garic and ginger and fry for a few minutes until soft.
Add your vegetables to the still hot frying pan and fry. Continue to fry, adding a little salt or the remaining stock cube (if necessary) until any liquid produced from the vegetables reduces and is completely fried.
* Return the beef to the frying pan before adding the cauliflower and on a high heat, fry all for a few minutes before adding the gravy. Carefully fold in the gravy ensuring all the ingredients are covered.
Try not to stir too much to prevent the cauliflower from going mushy.
Fry for a couple more minutes then remove the frying pan from the heat, serve up, garnish and immediately enjoy!

* I originally would include curry powder to the meat when cooking but have cooked many times without and found the recipe to be just as good. For a more Chinese style taste, you could add the five spice instead or just omit either.
** When cooking with plain rice, add the fried beef at the very end (after the vegetables, rice and gravy) in order to retain it's crispiness.
However, when cooking with cauliflower, as it has a tendency to go mushy if stirred often, I added the beef beforehand and the cauliflower last.
For even more of an authentic Chinese flavour, I made a tasty pouring sauce and poured into a cute little bottle - which you can see in the pics.
The sauce is made up of equal parts honey, soy sauce and oyster sauce is quite cute, even if I say so myself!