-- An Open Letter from The Other 98% on Arizona's Immigration Law

Tyranny has come to America. Not only can it happen here, it already has. Police in Arizona will soon be able to ask U.S. citizens to "show me your papers" after being stopped for something as simple as a broken tail light.

Arizona's new Immigration Law SB1070, requires local police to check the papers of anyone who is a part of a stop, detention or arrest when "reasonable suspicion exists that the person is an alien who is unlawfully present in the United States." Laws like these affect all of us. It means U.S. citizens will have to carry and present "proof" that we belong here. What criteria will police use to determine which of us to suspect? What does an American citizen look like?

Americans from all walks of life have come out against this travesty of our ideals -- everyone from Arnold Schwarzenegger and the NAACP, to Arizona's own Police Chiefs and even the Phoenix Suns.

One group that you might expect to stand up against this obvious assault on Liberty has been noticeably absent: The Tea Party. What gives? Tea Partiers have marched all last year in the name of personal freedom, lashing out against what they perceive as a sinister growth in government's powers. It seems natural then, that they would be on the front lines when actual tyranny rears its ugly head.

But no, the Tea Party's leaders and its members have been dead silent or supportive of the law. It seems that the Tea Party's ubiquitous "Don't Tread on Me" flags should really read "Tread on That Other Guy, Instead."

And what's next? Will the National Guard be stopping us at random checkpoints? This law already turns neighbor against neighbor by encouraging any wacko with a grudge to sue their local school for providing educational programs for children of undocumented parents, or their county hospital for treating emergency room patients without verifying their immigration status. By any measure SB1070 puts us on a slippery slope, indeed.

Supporters point out that the letter of the law isn't about race, citing how the law's recent update prohibits police from using race as the "sole factor" when determining suspects. But this is no more than a legal fig leaf. Will illegal immigrants from Canada or Europe be asked for their papers? Not so much. When was the last time Sheriff Joe raided a house full of Swedish nannies who stayed in the country long after their work visas had expired? On the ground, barring asking everyone for their papers, the law can only be enforced via de facto racial profiling.

But by being here, aren't these people already breaking the law, some will ask? Why has Washington done nothing to address the problem? Good question. Arizona is on the front lines of the nation's immigration problems, and many people support the law simply because -- in the face of Federal inaction -- the state is at least doing something. But Arizona's something is the wrong thing. What we need is comprehensive immigration reform that doesn't sacrifice the very ideals for which America stands. SB1070 not only betrays those ideals by turning citizens into suspects, it fails to crack down on illegal hiring or fix the system that got us into this mess to begin with.

Supporters of SB1070 forget that while many of the illegal immigrants in our country are Hispanic, Hispanics also make up by far the largest group of lawful immigrants in America. There is crime in every community, but just as Bernie Madoff doesn't make every stockbroker a crook, brown skin doesn't make every Hispanic a suspect. We must find a way to deal with crime without criminalizing Americans. Not long ago, a few bankers bilked U.S. taxpayers out of trillions of dollars. If it is truly "crime" the Tea Party wants to curb, why haven't they come out for a strong cop on the beat on Wall Street?

The Other 98% hereby challenges Tea Party leaders (that includes you, Dick Armey, Sarah Palin and Erick Erickson), as well as local chapters around the country, to publicly call for repeal of Arizona Law SB1070. It's time to speak up and defend the ideals you claim to stand for.

Which is it, Tea Party? Are you against tyranny or aren't you?

Let's solve our immigration challenges without sacrificing our ideals. The land of the free should not turn into the land of "show me your papers." Stand with us against this abominable law.

We invite everyone to co-sign our letter on our website at http://other98.com/sign-on-letter 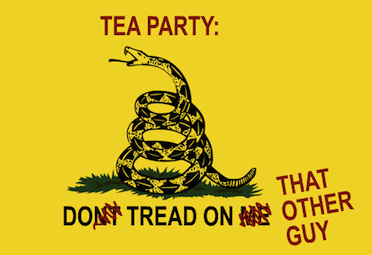