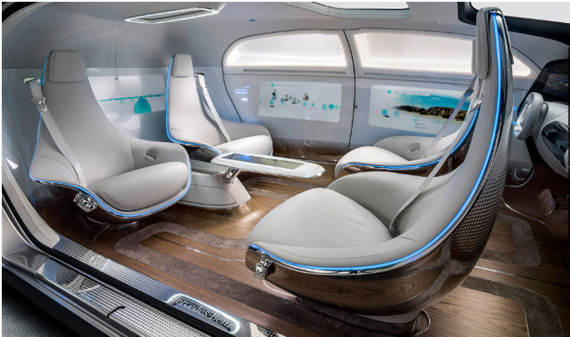 I am not an advocate for frequent changes in laws and Constitutions. But laws and institutions must go hand in hand with the progress of the human mind. As that becomes more developed, more enlightened, as new discoveries are made, new truths discovered and manners and opinions change, with the change of circumstances, institutions must advance also to keep pace with the times. We might as well require a man to wear still the coat which fitted him when a boy as civilized society to remain ever under the regimen of their barbarous ancestors. - Thomas Jefferson

One day we will be those selfsame barbarous ancestors as driverless cars, delivery drones, wearables, Facebook, Google and the rest become mere artifacts joining Gutenberg's press, Henry Ford's car, and Wilbur and Orville Wright's airplane, as curious in museum exhibitions and footnotes in whatever has taken the place of history books of any sort.

But in the meantime...we need to...we must...deal with the legal and ethical issues that are piling up in our world and not just dismiss them or any discussion of regulation as a hindrance to innovation and progress.

According to a recent article in Cornell Tech, "3 Reasons Why Tech Companies Need a New Kind of Lawyer":

Regulation can be a double-edged sword for technology companies. Even as laws provide safeguards for consumers, some legal experts argue they can also hinder innovation.

Let's be clear, this is not a new problem. It's a Digibabble conceit to think that our technology is the first to encounter the tension between behavior and advancement.

Vivek Wadhwa (an American technology entrepreneur and academic and fellow at the Rock Center for Corporate Governance of Stanford Law School and Stanford Graduate School of Business) wrote in a 2014 article in MIT Technology Review:

Take the development of copyright laws, which followed the creation of the printing press. When first introduced in the 1400s, the printing press was disruptive to political and religious elites because it allowed knowledge to spread and experiments to be shared. It helped spur the decline of the Holy Roman Empire, through the spread of Protestant writings; the rise of nationalism and nation states, due to rising cultural self-awareness; and eventually the Renaissance.

And here is the critical payoff:

Debates about the ownership of ideas raged for about 300 years before the first statutes were enacted by Great Britain.

Think on that! 300 years...we have new applications of technology confronting us almost every day - I have no doubt that if we had 300 years, we could cope too...but in truth, change is so fast and constant that we are not keeping legal or ethical pace, and although technology might advance, we are becoming legal and ethical barbarians fulfilling Jefferson's fears.

I recommend reading his full essay. The examples are still fresh and the argument cogent and clear.

CNN reported back in December of 2015, covering the decision by a Brazilian judge to take down WhatsApp for 48 hours on behalf of Brazilian telecoms, which claimed it was enticing people away from more expensive texting options and was unregulated:

All this is part of a massive power struggle going on right now between traditional companies and new Internet companies, and we're all in the blast radius.

It's one aspect of a tech policy problem that has been plaguing us for at least 25 years: technologists and policymakers don't understand each other, and they inflict damage on society because of that. But it's worse today. The speed of technological progress makes it worse. And the types of technology - especially the current Internet of mobile devices everywhere, cloud computing, always-on connections and the Internet of Things - make it worse.

We cannot wait for the first fatal plane accident involving a drone and a jetliner, nor can we delay until a hit and run caused by a driverless car creates a fatality, or for more passengers to be assaulted by Uber drivers, or neighbors disrupted by Airbnb rentals, or for the continued circumvention of actual laws that still apply, or ethical standards that are still clear.

In case the import of this still isn't clear, I'll spell it out: one of the big claims of Lyft and its other ridesharing competitors, like Uber and Sidecar, is that the reason they should not have to follow the considerable regulations that govern taxi companies is because Lyft/Uber are not in fact taxi companies. According to their view of the world, they are a technology company. They only connect a driver with a passenger as an intermediary; they are a mere software broker of a deal between two separate parties, and so they shouldn't be regulated like a taxi company.

Look, they have said repeatedly, we don't even own any cars...so how can we be a taxi company? In fact, Uber changed its original name, which was UberCab when it was founded by Travis Kalanick and Garrett Camp in 2009, to Uber Technologies to provide that regulatory cover.

And there you have it - add technology to your name and beat the rap....

Fusion in 2015 put forth a most unique and interesting proposition...rather than shoehorn new into old, use the same thinking and process that is accelerating the global spread of technology to put safeguards in place that won't hinder:

We're long overdue for a regulatory revolution. It won't come from Silicon Valley, home to techno-libertarians like Thiel, who see all regulation as unwarranted meddling in private affairs.

If there is to be any effective regulation of global technologies, from genome engineering to Google, it's going to have to take place at a supra-national level. Indeed, what we really need, to borrow a concept from Silicon Valley, is a global regulatory platform. In this new world, sharing-economy companies like Uber and Airbnb could be regulated sensibly, in a way that recognized their global clout without trying to make them fit into 20th-Century structures.

Below I will share some of the bigger cases that are starting to bubble up, and I reference Uber/Lyft and Austin, not to mention Facebook and its algorithm.

In researching and writing this story, an image of Frankenstein kept popping into my head -- are the consequences of an unchecked ego in pursuit of knowledge and, yes, power a lesson for our time? Listen:

With how many things are we on the brink of becoming acquainted, if cowardice or carelessness did not restrain our inquiries. Mary Shelley, Frankenstein

Frankly, I was inspired by this thought even though the intention is better suited to the Uber Technologies of the world.

I believe that we are actually limiting innovation and societal advancement because we restrain and hold back true and deeper inquiry since we make it too easy - financially and otherwise - for many to do as they wish.

Think about all the advancements that have occurred when one path or another was closed off - for one reason or another.

It will be interesting to see how Austin copes without Uber/Lyft...stay tuned, who knows what kind of innovation might occur...