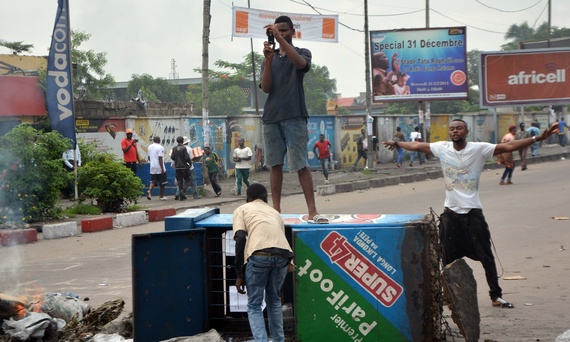 Protesters block a street in Kinshasa as they demonstrate against moves to allow President Joseph Kabila to extend his hold on power. AFP/Getty Images.

Congolese youth protested for three days in January 2015 to resist efforts by President Joseph Kabila to remain in power beyond his presidential mandate. According to Congo's constitution, the president can only serve two five-year terms, and Kabila's second term is scheduled to end on December 19, 2016. As his term nears its conclusion, President Kabila and his supporters aim to stay in power by any means necessary. The Catholic Church, more than 600 Congolese civil society organizations, the political opposition, and notable figures in the country, including members of president Kabila's majority coalition -- as well as voices in France, Belgium and the United States -- have all pushed back against proposals for changing the constitution so Kabila can remain in power.

The youth uprising in January was triggered by Kabila's second attempt to remain in power beyond his mandate through rewriting and perverting the electoral law. Kabila's majority in the parliament tried to push through a new law that would require a census as a prerequisite for holding elections. Many experts claim that conducting a census in a country that has not had one since 1984, especially given the lack of infrastructure in the Democratic Republic of the Congo (DRC), would take about four years, pushing the elections to 2018 or beyond.

The January uprisings represented the youth response to president Kabila's effort to remain in power through the perversion of Congolese laws. It was the latest in a series of actions initiated over the past year whereby youth have leveraged social media networks to organize, share pictures of protests, and provide updates on the unfolding political situation.

Congolese in other parts of the country and the global diaspora quickly joined in support of the Kinshasa youth and established the hashtag #Telema (a Lingala word meaning "rise up"). In addition to showing support on social media, youth in other parts of the country went into the streets and joined others in calling on the Congolese parliament to withdraw the electoral law.

The youth were so effective at sharing information with people inside and outside of the country that the government shut down the nation's Internet and SMS system within 24 hours of the uprising.

Although the uprising was successful, the youth paid a dear price. According to the Federation for Human Rights, 42 people lost their lives, mainly at the hands of government security forces who opened fire with live bullets into crowds of young people. Students reported that security forces snatched up the dead youth in an attempt to reduce the body count. Human Rights watch documented these events in its report "DR Congo: Deadly Crackdown on Protests."

Many more young people were injured. In addition, the university of Kinshasa and the government have been targeting students and youth for expulsion, with hundreds arrested in the wake of the demonstrations. Recently, a mass grave was discovered near the capital city of Kinshasa. Human Rights Watch, Congolese human rights organizations and families of missing youth have called for the bodies in the mass grave to be exhumed to determine whether any of the victims of the January uprising were disposed of in the grave.

The youth played a key role in the Congolese parliament ultimately voting to withdraw elements in the electoral law that would have given President Kabila an opening to prolong his rule. However, the youth are remaining vigilant as they expect Kabila and his supporters to pursue another path to remain in power. In fact, it appears that president Kabila has made his next move to assure that he remains in power beyond December 2016. The electoral commission has promulgated an electoral calendar of local, provincial and national elections that is impossible to organize in the time frame allotted. It appears that it is through the delay of elections that Kabila aims to remain in power. Nonetheless, the Congolese youth and the broader society have made it clear that they will not stand for Kabila remaining in power beyond December 2016.

Congolese youth have been organizing to educate their peers and the society at large about what is at stake and the role and responsibility of each Congolese citizen in protecting the constitution and the country's institutions. The Kabila regime has responded to civic education efforts on the part of the youth by arresting a number of youth leaders involved in civic education efforts and driven others into exile where they continue to organize their counterparts inside the country. The government has dubbed these youth as terrorists who are seeking to overthrow the government, in spite of a parliamentary commission report which states that there is no evidence that the targeted youth leaders are involved in terrorist activities.

Ultimately, Congolese youth are organizing for a new society -- one in which the interests of the people are prioritized and protected by their leaders. They are fighting to have a say in the decision-making process of their country, and to control and determine the affairs of the Democratic Republic of the Congo. This movement will require continued support from the diaspora and its allies in the global community.

Increasing global attention to what is happening in the Congo will be key to making the Congolese government accountable for its current and future actions. Media outlets, online networks, and a host of other communities need to support the courageous stand taken by youth in the DRC. A major reason that Congo has suffered six million dead since 1996 in the deadliest conflict in the world since World War II is that the world has been silent.

Congolese youth have provided the global community with another opportunity to demonstrate that African lives matter.