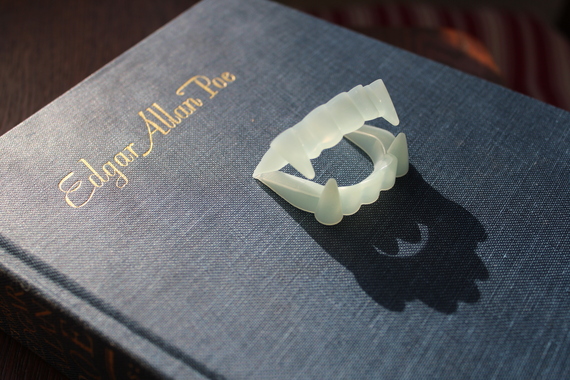 I was nervous, dreadfully nervous.

True, the tooth had haunted me both day and night, but my senses were only sharpened, not destroyed. I was certainly not mad! In fact, my awareness was so acute as to render me excruciatingly sane.

So listen carefully, ye with endodontic woes, and hear the ghoulish story on this All Hallows' Eve . . .

Oh, the nerve of that dreaded tooth! An angry nerve, indeed. I cannot claim credit for the murderous idea; it was my dentist who suggested that I schedule a root canal.

Last Wednesday, I arrived promptly at 9:30 am in the endodontist's waiting room. Like a snake charmer, his Assistant lead me down a narrow passage to an oxblood red vinyl chair in the surgical chamber, scattered with various metal instruments and machines.

Suddenly, the Doctor appeared at my side like an apparition. Wearing an ominous surgical mask and cap, I could only see his vexing blue eyes . . . which is why I didn't notice the tiny tire iron he was wielding in his latex-sheathed hand.

"Let's confirm that Tooth Number Three is our culprit," he said, before wrapping the metal instrument three times against my tender molar like he was chipping ice for his martini. The inflamed pulp shot searing daggers into my battered nerves.

"Unghhh!" I groaned, giving him the confirmation he needed to begin the lethal procedure.

The Doctor administered the first shots of Novocain into my gums with such an angel's touch, I was wholly unprepared for the poisoned pitchfork he thrust mercilessly into the roof of my mouth.

While the injected anesthetic seeped into my cells, the Assistant - is her back slightly hunched? - scurried around the chamber, preparing me for the wretched task at hand. She lassoed Tooth Number Three with a "rubber dam" that covered the rest of my mouth like a miniature tarp. I feared I might suffocate if the Rubber of the Damned suctioned against my nervously heaving nostrils.

Finally, Assistant Hunchback jammed a doorstop between my back molars to make it impossible for me to scream.

With Tooth Number Three sufficiently numbed, the Doctor extended a monstrous mechanical arm from the wall, lowering the Hubble Space Telescope over my face. With his evil blue eye peering into the complex series of magnifying lenses, I wondered if I'd be burned alive like a helpless insect on a sidewalk.

As much as it had abused me over the last several weeks, I was not entirely convinced that Tooth Number Three should be sentenced to death. It had served me faithfully since my youth - through braces, fillings, unpopped kernels, Sugar Daddies, pistachio shells, and night grinding. Is it really necessary to strip the thing of its life-giving innards in such a barbaric way?

My eyes darted from Assistant Hunchback to Doctor Evil Eye, trying in vain to communicate my reluctance. But, alas, it was of no use. All I could do was lie back as they committed the dastardly deed, listening to the quickening flamenco melody oozing from the chamber's sound system.

Assistant Hunchback passed Doctor Evil Eye a series of hideous instruments - probes, forceps, clamps, excavators. A switch was flipped, and through the whir and grind of the drill, I could hear the frantic strumming of a rosewood guitar.

A puff of putrid dust rose from my hollowed molar, exposing its inflamed pulp. With the Hubble Space Telescope in my face, I could only smell the odor of household bleach and burnt flesh, and see the glint of metal probes.

The Andulasians stamped their feet to the ricocheting guitar strings, while Doctor Evil Eye reamed bits of meat from the bloody canals. Tooth Number Three would not surrender easily. The clapping dancer whirled to a frenzied crescendo as the Doctor made one last stabbing probe deep into the root.

"Ole!" spurted from the speakers just as the last nerve ending was plucked, and the deed was done.

Nevermore will I open a bottle with my molars!