Why does the tea party, a group that seems to represent a small but extreme part of America, have such undue power?

Its power is indisputable when you look at what's going in America. Voting rights are being rolled back, even though most Americans don't support the changes. The Senate-passed immigration law was overwhelmingly supported by most Americans, but it has been stonewalled thus far in the House. The tea party shut down the government in October and has blocked infrastructure bills that previously enjoyed bipartisan support.

The tea party elites -- with little rebuttal -- have been able to make "government" the boogeyman. They have convinced too much of America that government is the explanation for their ills. Even though most Americans and even most tea party adherents like much of what the government does, the tea party elites proclaim that everything that is wrong, even non-economic and private sector problems, can be blamed on the government. 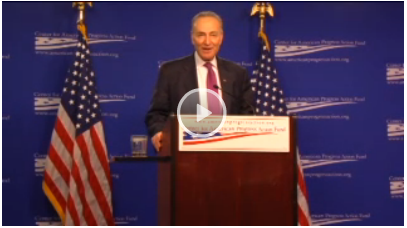 Watch the video of my tea party speech or read the prepared remarks on my website.

The first and most important force is a phenomenon that Democrats have recently begun to address: the decline in middle-class incomes. It's time we deal with the reality that, for the first time in American history, middle-class American incomes have declined for almost a generation. If middle-class incomes continue to decline, we will have a dramatically different America, a less optimistic, more sour America.

The second deep-seated force that fueled the emergence of the tea party is the rapid pace of change in America's cultural, technological and demographic makeup. Let me draw a historical analogy here to the temperance movement.

In the 1880s the U.S. was a rural country and people were on farms and small towns living a clean life. By 1920, America had been urbanized and diversified because of manufacturing, immigration, and so many other forces. And the cities were a totally different way of life with slums, bars and dance clubs, emerging suburbs and country clubs.

Prohibition was not simply about abolishing alcohol; it was an attempt by rural Americans to pull their country back to an agricultural ideal that was being rapidly replaced by a new cultural and economic order.

Just as the temperance movement at the turn of the last century convinced its millions of followers that if you simply got rid of alcohol, America would almost magically revert back to the American they preferred, the tea party elite have manipulated their millions of grassroots followers to believe the same about government at this moment in time.

Tea party adherents see an America that's not reflective of themselves, and the America they have known, and they just don't like it. We have entered "the second machine age," a transformation of work, leisure, and life that wouldn't have been recognizable when Reagan entered the White House. The distribution of power is changing to include more women, more African-Americans, and more Latinos.

So somehow the tea party elite managed to switch cause and effect of the financial crisis. The deficit, which was caused by Republican policy decisions to not pay for two wars, a Medicare prescription drug bill and regressive tax cuts, and the necessary and emergency policy responses by both Presidents Bush and Obama -- became the cause of the financial meltdown, not the result.

Democrats had an opportunity to counteract this story, but we didn't do a good enough job explaining the nature, causes, and severity of the financial crisis. Neither did we explain how the stimulus and government spending would help ameliorate the problem. We focused on health care -- an urgent problem, to be sure -- when income inequality was a bigger concern. There was no effective defense of government.

However there is a glaring weakness, one very weak link in the tea party's armor, which is an inherent contradiction within the tea party that I believe can be exposed to greatly weaken their hold on the policy debate.

To the plutocrats and their allies who run the tea party, government is the enemy. These people are wealthy, hard right, selfish, narrow; people who don't want to pay taxes and don't want government interfering with their companies no matter what damage their companies may do to their workers, to the environment or to anybody else. They gave people a phony explanation for why their incomes were declining, why good paying jobs were dwindling, why society was changing -- and they called it all "government."

It is up to us to answer the tea party and expose its fundamental contradictions. Here are four ways to make that happen:

In conclusion, the bottom line is clear: Economic and social change which has been developing over the past two decades has accelerated and become more apparent in the past few years. The economic changes have caused middle-class incomes to decline significantly and reduced the number of good paying jobs. The social changes have exacerbated the frustrations, fear and anger of many average Americans.

The decline of the deficit and Obamacare as the most salient electoral issues and the prominence in the issues of government's ability to help restore and build the middle class provides us a golden opportunity to expose what has always been a fault line in the tea party: that the obsessively antigovernment philosophy of the tea party elites does not meet the actual needs of the tea party membership.

By proudly and repeatedly voicing a generalized philosophy that government is a force for good and highlighting specific issues which demonstrate how government can be part of the solution, not the problem, we can take America back to a place where gridlock fades, smart government-oriented solutions pass, and the middle class can reclaim the American Dream.

For a full transcript of my speech, visit my website. Cross posted to DailyKos.