One of the actors, citing her skills in the production's playbill, says she's a "things meshed together" artist. She acts, she sings, and she makes music. Throw in the making of art and that's what Four Larks' spectacular production of "The Temptation of Saint Antony" is, a meshed together multimedia phantasmagoria, aka a junkyard opera. 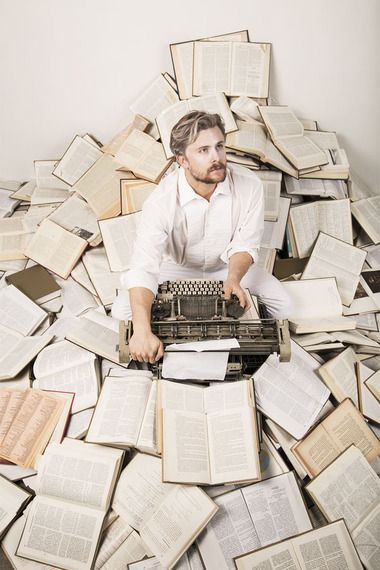 Created and directed by Four Larks (Mat Diafos Sweeney and Sebastian Peters-Lazaro), it's adapted from Gustav Flaubert's "La Tentation de St Antoine." The Hermit (Max Baumgarten) sequesters himself in a cave to commune with God. If we couldn't read his mind, we'd just see some scraggly guy rocking and roiling to whatever internal dramas play out in his mind. Since we can, though, we channel his same temptations, each of which tries to divert him from the Word made immanent.

We meet/he struggles with the Seven Deadly Sins, Biblical Miscreants, including the Queen of Sheba (Kalean Ung), King Nebuchadnezzar (Eli Weinberg), Gnostic Heretics, the gods and demons from other religions and, last but not least, the embodiments of Lust and Death. Other cast members include Caitlyn Conlin as Hilarion, a fellow anchorite, Zachary Carlisle Sanders as the Gymnosophist, an Indian ascetic, and Paula Rebelo as Ammonaria, an Alexandrian martyr. 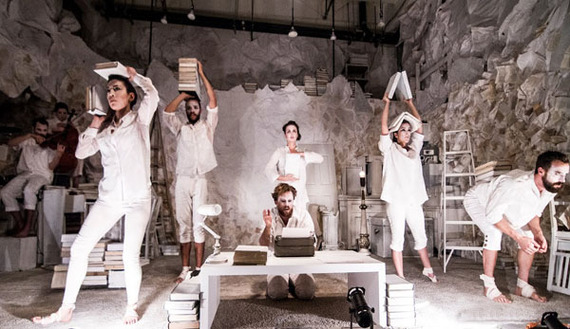 The story itself is an inspired choice to stage. It recounts the blazing obstacles that saints face as they devote their lives to God. Whether or not you believe in saints, you have to at least acknowledge febrile visions. They're in abundance here. It's written that Flaubert conceived the piece as a stage script. Even so, there were no design instructions, no music - nothing that would lead you to think the text would evolve into an intimate Cirque du Soleil marvel. 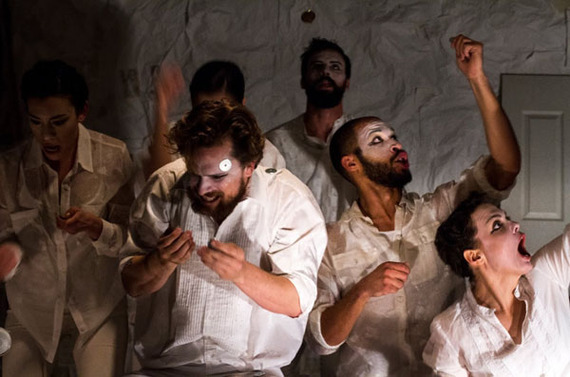 The production feels like one big epiphany. Everything visual, aural, and tactile is keenly integrated. The visuals are nothing short of miraculous. You don't get the play's location until you get your tickets. On a dark and rainy night we entered a building that, from the outside, wasn't even remotely theatrical. It might as well have been a cave in Egypt. 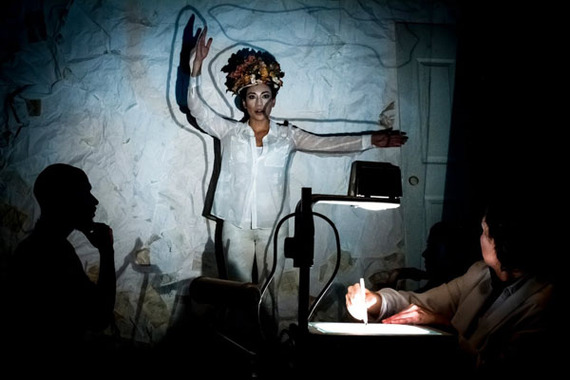 As you approach the stage from the front door, you encounter a curtain of pages from a book; similar pages papier-mâchéd on the walls; and a bunch of typewriters (worth a fortune on eBay). On stage, Antony types with the sound and fury you can only get with a manual typewriter. He pounds the keys, rips the sheet of paper off the platen, balls it up, and throws it into the audience. This is meant to suggest he's having trouble articulating what he experiences. For us, though, it's a signal that the story is going to be as much about visuals as it is about the paucity of words to articulate a transcendent experience. 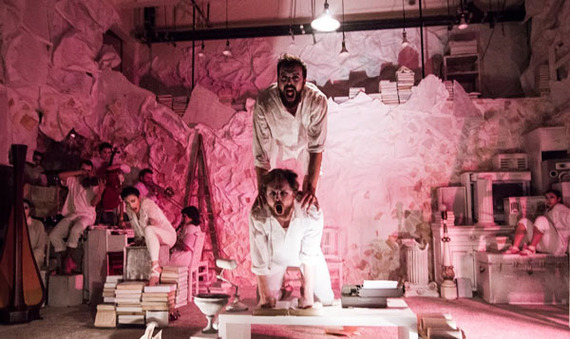 And what visuals. There's a reason that the Temptation of Saint Anthony is such a favorite subject for artists. The premise is simple - a hermit in a cave. The temptations, though, give free reign to the imagination. Surrealists and proto-surrealists like Bosch, Dali, and Ensor have all painted the scene. The visuals, courtesy of Peters-Lazaro and Regan Baumgarten, present everything and everyone in white (white as in a blank slate; white as in a pure soul). White also makes it easy for the audience to inscribe themselves into each utterance, each movement. Along with the music, the physical expressions, the facial contortions, and the co-joined dances feel both Baroque and postmodern, like a collaboration between Caravaggio, David Byrne, Twyla Tharp, and Kabuki masters. It's a nimble and adroit cacophony: everything's restless yet subdued, vivid yet simple, tortured yet eloquent. In short, it perfectly describes the life of a saint.

The music's by Ellen and Warkentine and Mat Sweeney. Jesse Rasmussen wrote the lyrics. Though you don't later hum the tunes, you do notice the way they fill the cave with music of the spheres. You do literally notice the music: an orchestra sits off to the side, framed by a harp (Katherine Redlus) and a trombone (Matthew Proffitt), a pairing that suggests something out of one of Kurt Schwitters' Dada poems. There's also a piano and clarinet (Warkentine), a violin (Danny Echevarria), a cello (Prudence Rees-Lee), and percussion (Kevin Schlossman).

You walk away with the sense that you've seen something extraordinary. This is a sensuous and intellectual experience. It's literate, gorgeous, and thought-provoking. You're held in ecstatic thrall from way before the start to long after the finish. Words on paper (literally from the moment you walk in the door) brought to life with great imagination and vivid vision. Is there a better definition of memorable live theatre?

Performances are 8:30pm, Tuesday - Saturday. NOTE: The play runs until March 6. The location will be revealed upon booking. For more information visit fourlarks.com or write info@fourlarks.com