A religious credo is a guideline for life, a suggestion of purpose, and an imperative goal for humanity. Ten is a popular number. Commandments are those principles that humans must heed and follow. Commandments should be positive and compelling rather than negative and prohibiting. They are prescriptions of natural law as applied to religious humanism. 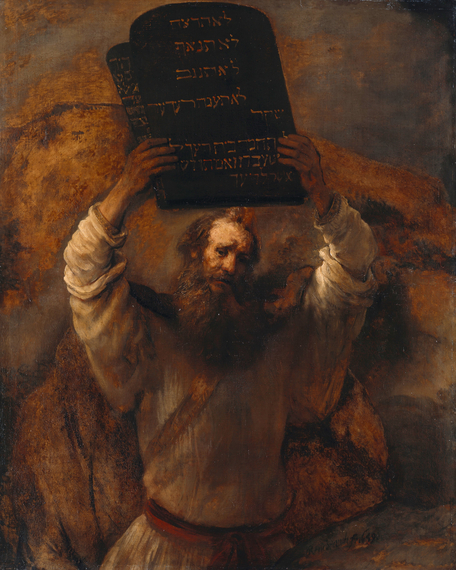 Moses With the Ten Commandments by Rembrandt van Rijn, 1659, from the Gemäldegalerie, Berlin

Why, though, should science not also have its ten commandments?

Here is the current set of commandments through the eyes of science, in the form of objective, natural theories that should be believed:

1. Conservation theory: Energy and mass may be neither created nor destroyed but may be interconverted. Thus, creation and final destruction are not relevant.

2. Entropy theory: Entropy increases spontaneously. Nature is being dissipated. Improvements, syntheses, organization, and growth require energy at the expense of the environment.

3. Quantum theory: Activity is the product of energy and time.

6. Evolution theory: Combinations of the kinetic molecular theory, the chirality principle, and the laws of genetics lead to life and the development of species with both inheritance and variation, due to heredity and mutation.

7. Relativity theory: The notion of space-time (simultaneous, consecutive, and complementary events) is defined from the perspective of the observer.

8. Psychological theory: Respect for nature, especially for life, is mandated.

9. Behavior theory: There is satisfaction to be had in helping others toward happiness, which is usually reciprocal in bringing happiness in return. Personal immortality is achieved by the views of others.

10. Ethical theory: For a worthwhile existence, we must strive to maximize freedom with responsibility and find fulfillment with peace and love.