A More Secure World: Our Shared Responsibility (United Nations, 2004) is freely available online in multiple forms including with and without footnotes, and is one of four works that literally changed my life and caused me to create the Earth Intelligence Network, an accredited 501c3.

Below are the ten threats in priority order, followed by a very concise summary of each. 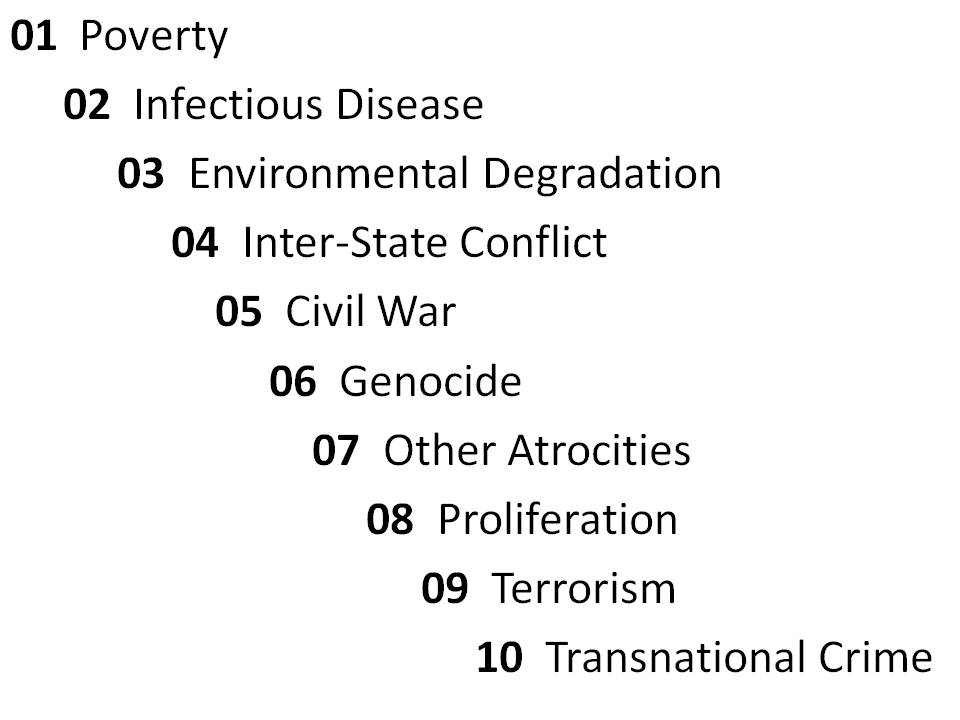 Below are "snapshots" of the ten high-level threats from my perspective, not from the reference source, which should be consulted directly. In every instance, corruption and fraud (with attendant enabling secrecy and deception of the public) play a major role in nurturing any given threat. Everything here is either fact or common sense, yet none of this is being discussed by any of the world leaders, who would prefer to talk about carbon trades, a form of phantom wealth that is merely a scam at the highest levels, not something actually intended to help the five billion poor.

01. Poverty is pandemic. 5 billion people live in poverty globally (one billion extreme). It's increasing in the USA. Americans cannot buy or give our way out of poverty, we must empower the poor to create infinite wealth by connecting them to one another and to information.

02. Infectious Disease without borders kills leaders and wealthy, prevention critical, low-cost medicine works. The U.S. pays $600 a unit for something that sells for $6 overseas.

03. Environmental Degradation is poisoning air, water, and land while also accelerating. Changes that took 10,000 years now take 3 years. It is not just Global Warming -- fresh water is vanishing, earth is toxifying. When an aquifer (dropping a meter a year) takes in salt water it is lost forever.

04. Inter-State Conflict is made possible by UN Security Council members who sell the guns instead of banning exports. We should create regional peace networks, use planned giving to negotiate peace terms, and invest in peace which is one-third the cost of war.

05. Civil War is a manifestation of corruption. America supports 42 of 44 dictators looting their respective commonwealths, a story must ably documented by Ambassador Mark Palmer in Breaking the Real Axis of Evil-How to Oust the World's Last Dictators by 2025 (Rowman & Littlefield, 2003).

06. Genocide coincides with resource scarcity and lifetimes of shared hatreds. It can be anticipated and prevented. Israel must adapt, instead of arming Arabs and Israel the USA should invest in a fifty-year education & prosperity regime that raises an entire new generation in peace.

07. Other Atrocities include child and adult slavery and prostitution, "by name" kidnapping of movie starlets and girls that catch a wealthy foreign predator's eye, and murder for body parts.

08. Proliferation, defined as Nuclear, Radiological, Biological, & Chemical (NRBC), should also include cluster bombs and small arms while continuing the campaign to not only eliminate landmines, but clear all existing landmines that continue to maim indigenous populations. UN Security Council members are the proliferators!

09. Terrorism is a tactic, not a threat, but included by the Panel to recognize the potential for catastrophic consequences, e.g. radiological poisoning of an entire city. Law enforcement can and should resolve this providing that USA and others wage peace instead of war.

10. Transnational Crime is seriously under-estimated. It is at least $2 trillion a year. It includes the Mafia, the Vatican, Wall Street, and elements of the US Government entwined. Drug cash is Wall Street's liquidity.

A threat to one is a threat to all. Globalization, complexity, our relatively unsophisticated mechanisms for sharing information and making sense out of changes that we barely perceive, much less understand, all assure that any major threat -- and especially non-state threats such as infectious disease -- will cross borders with impunity.

We must get serious about prevention. I encourage one and all to read General Al Gray, USMC, "Global Intelligence Challenges of the 1990's," American Intelligence Journal (Winter 1989-1990) in which he calls for a redirection from the Soviet Union to the Third World; a massive investment in Open Source Intelligence (OSINT); and the use of OSINT to justify and guide what he called "peaceful preventive measures. No one wanted to listen then, and they still do not wish to take this recommendation seriously even though three Commissions have adopted my suggestions reiterated over the past 20 years: the Aspin-Brown Commission, the Moynihan Commission and most recently, the 9-11 Commission.

The report exaggerates the threat to humanity from nuclear, biological, and chemical weapons, while completely ignoring the much more pervasive and more deeply harmful effects of the Industrial Era with its many poisons, toxins, and other loosely-managed nuclear, biological, and chemical materials. Charles Perrow provides an excellent discussion of the latter aspect of this threat in The Next Catastrophe-Reducing Our Vulnerabilities to Natural, Industrial, and Terrorist Disasters (Princeton, 2007).

In the case of the United States of America, I must with deep concern point out that the US Government spends next to nothing on eight of the ten threats, and virtually all disposable income -- and trillions more that have been borrowed -- on a militarized response to threats eight and nine. In 2012 I believe America must elect a President that not only understands the ten threats, but who is capable, in advance of election, of putting forward a balanced budget for a Whole of Government approach to the eradication of all ten threats within two decades, beginning with the immediate eradication of poverty here in the USA.

Since this series is about a Virtual Cabinet in which I model what I am looking for in the Cabinet, let me simply say that anyone who cannot recite these ten threats from memory, in priority order, is not fit to serve the public. This is "root" knowledge without which no politician or policy-maker can be effective.

The report also speaks to the importance of being more pro-active in the future, which I take to mean being less about prevention and more about fostering opportunity for the five billion poor. Finally, the report calls for much enhanced post-conflict peacebuilding such as has not been seen in Iraq and Afghanistan in the aftermath of the two elective US invasions and occupations.

Every objective of this superb report requires a strategic intelligence (decision-support) capability that does not exist. At the strategic level, it is very important to have a realistic understanding of who the major players are with respect to the collection, processing, and analysis of major flows of information. We are in the Information Era, yet most governments and corporations and foundations and non-profit organizations are extraordinarily out of touch with reality.

What has become evident to me in recent years is that no government, no international organization, and certainly no corporation, can be relied upon to seek out and act on the truth, or even to act in the public interest. Corruption within all these organizations is so epidemic as to make any politician, any policy-maker, however honest to begin with, complicit in short order.

One thing, and one thing only can restore the sovereignty of We the People, and achieve the prosperity and peace we all aspire to: public intelligence in the public interest.