Sometimes in the middle of the night, when I wake and can't get back to sleep again, I look in on my 5-year-old sleeping so peacefully he practically glows, and take a deep breath to calm myself. 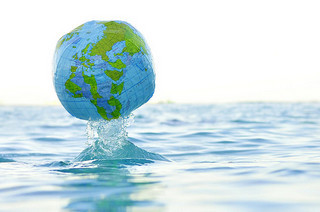 There isn't anything wrong with my boy. But since a freakishly warm March in Chicago a couple of years ago when I snapped photos of Andrew running through a backyard sprinkler in his bathing suit, I've been educating myself about climate change. I've read books and studies, watched online lectures and panel discussions, and what I've learned keeps me up at night.

It also makes me wonder: If I'm this anxious about the future, in which temperatures are expected to soar, sea levels to inundate coastal areas and weather extremes like droughts and floods to compromise fresh water and food supplies, how are climate scientists faring? How do the people most "in the know" ward off despair? Where do they find hope?

I've started asking them, and already I've learned two extraordinary things: 1) even scientists who shared the Nobel Peace Prize with former Vice President Gore often answer their own emails and agree to talk with a writer they don't know, and 2) the overwhelmingly complex problem of global warming is, in some ways, simpler than many of us think.

"It's not rocket science," says Dr. Alan Robock, Distinguished Professor of Environmental Science at Rutgers University. He explains that we already have the technology to mitigate climate change, but we aren't deploying it quickly and fully enough. "We have to stop putting carbon dioxide into the air as fast as we can, and that means switching to solar and wind power for our energy." The best way to incentivize that, Robock believes, is through "a gradually increasing carbon tax so that [renewable energy sources] become cost-effective."

Dr. Richard Somerville, Distinguished Professor Emeritus and Research Professor at Scripps Institution of Oceanography, agrees. "It's the total amount of carbon dioxide and other heat-trapping gasses that determines the amount of climate change, the degree of warming," he says. "It's pretty simple."

How optimistic is he that we'll shift away from fossil fuel energy in time to avert the most catastrophic consequences of global warming? In terms of technology, very optimistic. "The switch to renewables is very doable," he says. But he also feels a sense of political pessimism: we are not yet acting with the urgency required.

Dr. Terry L. Root, Professor and Senior Fellow at the Stanford Woods Institute for the Environment, is blunt about the evidence she's collected in her studies of the effect of temperature on wildlife. Root says we're en route to a mass extinction in which as many as half the world's species will die out, and she sees no way off that path. But we can lessen the number of species lost and, in the process, increase our own ability to adapt.

How hopeful is she for the future? That question elicits a long sigh. What's needed, she says, is the rapid deployment of renewable energy resources, particularly wind and solar energy, so that we can stop burning fossil fuels. "But we have to have the political will."

That's the refrain I'm hearing from scientists who study the atmosphere, the ocean, the polar ice caps, the biosphere: the only hope for mitigating global warming is to stop burning fossil fuels. Climate is an infinitely complex system, but one reality is not: the more greenhouse gas emissions we produce, the quicker average global temperatures will rise to the point where human survival will be difficult at best. And the less of these gases we produce, the less drastic climate change will be. It's that simple.

Of course, simple does not mean easy. Shifting the global economy from non-renewable to renewable energy requires tremendous effort and collaboration, locally, nationally, and internationally. And it must be done quickly.

But, daunting as this challenge may be, none of the scientists I've spoken with so far believe we're doomed. Root says she's "really glad that people are the cause of this CO2 going in the atmosphere. Because we're causing it, we know how to fix it." Of the political will necessary, Robock is optimistic. Humans are "inventive, creative beings," he says, and remarkably open to collective change. "Ten years ago, who would have thought we'd have a black president and gay marriage?"

I find that sentiment comforting, at least by the light of day. In the middle of the night, in the aftermath of a "polar vortex" that's in line with what climate models predict, the bright side is harder to see. But of course the best hedge against despair is action, and political will starts with individuals. Now is the time to make noise, to contact leaders and representatives, to protest and insist and imagine a near future in which renewable energy becomes cheap and plentiful, staving off the worst of global warming. We can do this. That's what climate researchers keep telling me. In the middle of the night, while checking on my son, I have to believe them.