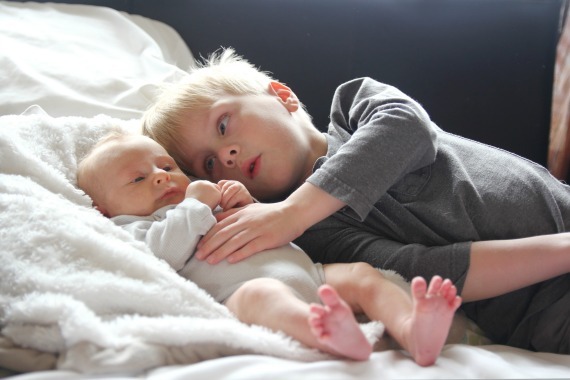 "Don't pick up your sister!"

This is my refrain. Every morning, afternoon and night.

My sweet 4-year-old loves his little sister so much, and it is beyond sweet. I just wish he didn't want to pick her up all the time. She just turned 1, and she's so little and delicate compared to my frenetic 4-year-old.

What if we somehow found ourselves in a dangerous situation and I was incapacitated, and he thought he couldn't pick up his sister even then?

But none of that was what prompted my panicked directive, and I knew it.

Sandy Hook. Aurora. Charleston. San Bernardino. Orlando. Dallas. Nice. Munich. For Christ sakes, 9/11. We are New Yorkers, and we live under the shadow of that every day.

What a world we live in.

I feel sick even thinking about it, but it is our reality. I want my babies to be safe, I want them to be self-sufficient, and I want to protect them with every last breath in me. I don't want to frighten them, but I don't want to leave them helpless either.

In fairness to myself, I've been practicing some basic emergency skills with my son over the past year. After a high school friend's young son called 911 when she passed out, I realized that my son wouldn't have been able to do that. I had him memorize the number, though sometimes he misremembers it as "9911." I quiz him on our address. I remind him who to approach in case we're ever separated (police officers, firefighters and other mommies with children). I talk about never picking up a gun in real life and going straight to a parent if one is ever found.

But there's so much more to worry about, and now there's another little one in the mix who can't fend for herself at all. My son has always referred to himself as his little sister's "protector," which I thought was adorable, but now I'm relying on him to make good on that promise. Is that fair? I don't know. I don't care. It just is.

He's a big kid, a full head taller than most of his preschool classmates, but he's still a kid. It's hard for him to pick up a baby the right way. So the other day, I started teaching him to lift her under the arms. And the next, getting him to put one arm under her armpit and around her back, and the other under her tush. Tomorrow, I'll work on having him lift her from a standing position. The day after that, I'll have him try to do it without my help. And so on. Over and over again.

Mind you, he's been loving all of this. He feels like he's doing something fun and special, something I'm letting him do because he's a big boy or he thinks I'm silly. He laughs. The baby laughs. I laugh with them and simultaneously try not to cry.

Some days, being a parent is too much. Too much stress. Too much worry. Too much potential for disaster. And lately, it doesn't feel too far-fetched that something horrible could happen. Every time I turn on the news, something horrible has happened. It's really but for the grace of God that it hasn't happened to us, and I never lose that perspective.

It's not going to keep me from leaving the house (most days), but I certainly wouldn't be helping my kids if I pretended like it all wasn't happening.

So we will keep practicing. In case of emergency. Just to be safe. Just in case. Because I need to have them safe, and I need to know that I've done everything in my power to make that happen.