An armored personnel carrier bought by a sheriff's office in Washington state with anti-terrorism dollars was used to pull over a suspected drunk driver. A $21 fish tank, a hog catcher and a $24,000 "latrine on wheels" were purchased with homeland security funds in Texas. A counter-terrorism summit was held on an island resort.

Those are just a few of the examples of wasteful, misguided or questionable spending in the name of protecting and preparing the nation for potential terrorist attacks highlighted in a report released today by Sen. Tom Coburn, R-Okla . . . 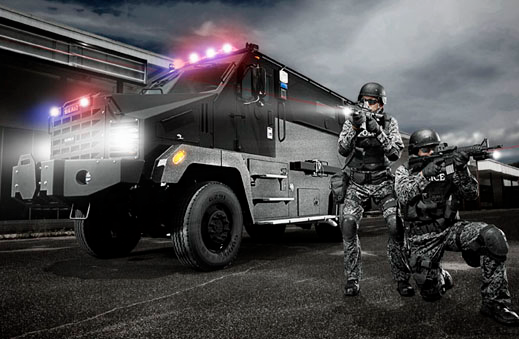 Coburn's report focuses on the $7.1 billion security program, launched in 2003 to benefit seven major American cities, including New York and Los Angeles, considered top terrorist targets. The grant funds are administered and disbursed by the Department of Homeland Security.

Other cities cried foul, and politics began to overshadow more practical spending decisions. Lawmakers who represented less-populated areas of the country demanded their own slice of the pie, and the program ballooned to more than 60 cities, including some seemingly far off a terrorist's map of targets. Purchases challenged in the report include:

--Police in Clovis, Calif., deployed their armored BearCat truck, which typically costs about $250,000, for an Easter egg hunt, while a sheriff in New York state showcased his similar tank-like vehicle in 10 parades over the course of a year.
--Authorities in Columbus, Ohio, used $98,000 in grant funds to purchase an "underwater robot."
--Two drones purchased by Seattle police with $80,000 in grant funds could not carry anything heavier than 2 pounds, could not be flown above 400 feet and had a battery life under 10 minutes.

Overall, the federal government has sent $35 billion in grants to state and local authorities over the past decade by expanding existing programs or creating new ones after the Sept. 11, 2001, terrorist attacks.

Waste is one thing. Even more disturbing is DHS spending that's not only unnecessary, but further militarizes the country's domestic police forces. There have been several investigations documenting the latter, including an excellent report last year by the Center for Investigative Reporting.

The linked article notes that last year, the mayor of Escondido, California "said he wouldn't have approved local dollars being used for a $250,000 BearCat, but it was OK since federal taxpayer funds were involved."A BearCat is a military-grade armored personnel carrier made by Lenco, a private company that has made a fortune off of wasteful (alleged) anti-terrorism spending. (The image above was an actual marketing photo Lenco used to promote the Bearcat to police departments.)

I wrote a piece for HuffPost earlier this year about tiny Keene, New Hampshire, where city plans to acquire a BearCat were met with fierce resistance from the town's citizens. The town went ahead with the acquisition anyway.

I guess you can never be too prepared. If Vermont ever invades, Keane will be ready.