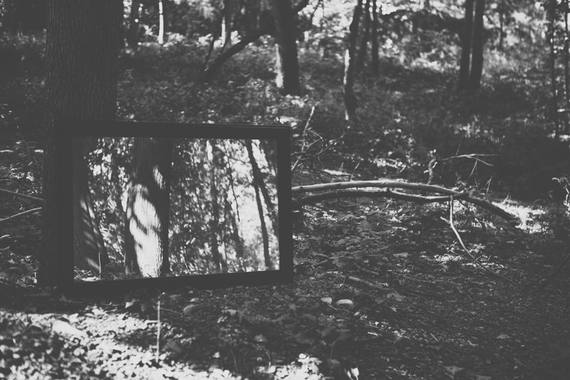 It was a biting cold type of Montreal winter day. Voyce* had reached out to ask me to write something to intro his upcoming album. I say something because I had no idea what he had in mind. Neither did he for that matter. We sat at Starbucks nestled on the top floor of my favorite Indigo Books in the city and touched on the themes addressed in Alone in a Crowd: Angels | Demons. Not too long after that evening, the spoken word result of our conversation came together at the tip of my fingers. The words were brief but seamless.

"The Things That You Are," the intro track to Voyce*'s debut album is the gatekeeper to a 45 track musical journey. With the launch date right around the corner, Voyce* and I went back and dove into some of the rhyme and reason behind "The Things That You Are" and its inception. Here's a rear view mirror glimpse of why this piece means so much to both of us.

I met Stephen one week after my book The Joy of Cancer was published, just short of 3 years ago. Within just a few months of the book launch, unknowingly and completely blind sighted with an unexpected epic challenge, I found myself in the deepest thickest muck of what he refers to as "the in between." Essentially this non-physical location sits between two periods in your life when you have no idea where you are going. During this transition period the rug is pulled out from under you and you find yourself questioning everything; it's the journey from one chapter to another.

Stephen was in the thick of his own "in between" when I met him. I watched him trudge through this period as it were a swampland, and at times, like quicksand about to swallow him whole. He grasped at thin parts of himself, with very little hope, and no recognition that he was evolving through a monumental transition. I saw him slowly grow into a giant pair of extremely well fitted shoes. Eventually, throughout the years in which he produced Alone in Crowd, he began to find his way and the shore was upon him with endless land to conquer insight.

Watching Voyce* trudge through the muck helped me to push forward through mine. And I too eventually saw sight of a new shore. Looking back, "The Things that You Are" was the first grasp I had at my own shores.

I witnessed Stephen live the breakthroughs and the real ugly stuff you don't want to breathe a word of. I saw the silent hand he held out to life, reaching with quiet fear and silent hopefulness. I saw this uber conflicted person meeting all facets of himself and eventually coming to accept them. I was a witness simply withholding judgment and gently reminding him with every dark turn of the core of who he believes himself to be.

Because of this, and the fact that I'd lived my own "dark nights of the soul," I could connect the dots between all the tracks he created. He saw the same determined answer seeker he is, reflected in me. I knew the person he had been, the person he currently was and the person he wanted to be.

My task with this track was to open the door to the journey the listener was about to embark upon. Pivotal in guiding the listener, but, as well in guiding Stephen; reminding him of himself. We both learned through the "in between" that our angels and our demons are two faces, among many others, of the same self. Life is not black and white. We are our own angels, our own demons, and more.

I always thought of myself as a writer. Period. When I found myself in "the in-between" I was ready to lock that part of myself away and throw away the key. Being in the studio recording, I tasted liberation, one vocal piece at a time. I wasn't just a writer. My words infused my voice and reached beyond paper or a screen. I could make art, bringing words to life almost three dimensionally. I could influence music; I could reflect emotion and evoke feeling under the influence of my voice.

In the same way, I saw and remembered who he is underneath his own conflicted states, Stephen saw beyond the pain of where I stood on the journey, understood who I was, and created a space where I could safely (re)explore my ability to create. We were inherently relevant to each other. I also needed someone to believe in me when I'd lost faith in myself and in the hand life extended to me. At the time, I did not understand why he chose me to write "The Things That You Are," let alone why he wanted me to record it. In that way he was a gatekeeper to the next step in my artistic journey.

Alone in Crowd: Angels | Demons explores the dualities of life. "The Things That You Are" brings the journey full circle - bridges the gap between these dualities, showing us that these are only ever two facets among many others, of the same face. It's a summary of everything Voyce* has learned on this stretch of his journey. The piece is like a light at the end of dark tunnel; and, at the same time, staying true to the theme of dualities, the darkness at the end of the light. These two, darkness and light, are intrinsically related and cannot be separated; instead we must bridge the gap through acceptance. The way we accept is to know. The way we know is to explore. The way we explore is to step into. "The Things that You Are" is the first step into the adventure.

What you discover is entirely up to you.