Recently, scientists have discovered what may be "the penalty kicking center" of the human body. Researchers at the University of North Uist observed hundreds of individuals, and found that people activate muscles in the foot when they kick a penalty, as opposed to when they are resting or sitting. In addition, they found that people who had a foot injury had more difficulties with kicking penalties than people without foot injuries. "Using measurements of muscle contraction while people were playing football, we were able to localize the human ability of penalty kicking to two regions of the human body at the end of the legs called feet", explains Prof. Colonsay. However, scientists at the University of St. Kilda are skeptical of this conclusion. They performed a similar study last year in which they found that feet were more active during tap dancing than during regular walking. "More research needs to be conducted to understand whether feet are tap dancing centers or penalty centers", says Prof. Orkney from the University of St. Kilda. "Furthermore, it is possible that feet are active during more than one task, and the complete range of the functions of the feet may be more difficult to identify than previously thought", he adds.*

Naturally we are aware of the full range of functions of the feet, which include but are not limited to penalty kicking and tap dancing. We also know that many other body parts are involved in each of these activities. Why is it then, that when it comes to the brain, we are so tempted to simplify and localize function? "The amygdala, the fear center of the brain", "the prefrontal cortex, the brain region that is responsible for planning", "the hippocampus the memory center of the brain", and so forth, are commonly encountered phrases in popular media. Often they are used to describe the results of a neuroimaging discovery in a case-control study. They tend to be not only tailored to a particular function that was investigated, but also to the patient population in question. One day when hearing about anxiety disorders, one may learn that the amygdala is the "fear center" of the brain. Yet, the next day, when reading about antisocial personality disorders the amygdala may well be called the "empathy center". Assume someone swapped these conditions around without changing any scientific facts. Would this mean patients with antisocial personality disorder have smaller "fear centers" and patients with post-traumatic stress disorder have dysfunctional "empathy centers"? These conclusions would clearly be problematic from an intuitive standpoint. "Fear centers" and "planning centers" are not separate rooms in our brains in which neurons ring alarm bells and draft flow charts, respectively. Seductively simple explanations - variations on phrenology ("bumpology" see this post) - may link an atypical brain region to the symptoms of a clinical population, but they do not do justice to the complexity of the organ's mechanisms or the associated experiences. 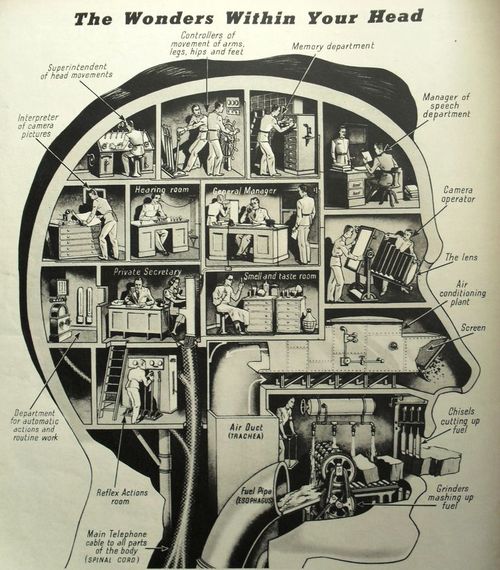 The brain is commonly intuitively regarded as a collection of separate regions each with distinct functions of complex behaviors, experiences and phenomena. But, "Fear centers" and "planning centers" are not separate rooms in our brains in which neurons ring alarm bells and draft flow charts, respectively. Variations on phrenology (i.e. distinct functional specialization of brain regions) may link an atypical brain region to the symptoms of a clinical population, but they do not do justice to the complexity of the organ's mechanisms or the associated experiences. (Image from http://www.openculture.com/; From the December 6, 1938 issue of LOOK magazine).

The described simplified statements are not usually uttered by scientists themselves in their journal communications, but are all too common in popular media. There they are convenient ways to tie a statistic in a digital brain to a human characteristic to explain, in the simplest possible way, an observed group difference in brain anatomy or function. While they may not be entirely reflective of reality, some simplification of brain function is often useful precisely because it is so much more complex than say, the function of the feet. The wide-ranging and interactive functions of brain regions are neither immediately observable, nor intuitively obvious, nor easily described. Consider the phenomena the words "memory" and "fear" actually describe. The hippocampus, is often referred to as "the memory center". What does the recall of a memory entail? A sensory cue, attention, mental imagery, associated emotions (e.g. nostalgia, grief, desire), attention, introspection, possibly also communication or other actions - all are part of the experience of remembering, and are generally considered to have their own "centers" outside of the hippocampus. Similarly, fear occurs in conjunction with a lot of other things: a peripheral bodily reaction, evaluation of surroundings, preparation for action, and, indeed memory recall. Neurons communicate across the brain at speeds of up to 100 meters per second. How big is your brain, and how long does the experience of fear last? This gives an idea of how many times a so-called "fear center" can (and will) interact with the rest of the brain and body to concert the entire experience of fear.

The amygdala is essential for the experience of fear and the hippocampus for the formation and recall of memories. However, no "center" in the brain is acting in isolation, nor is any mental process an isolated phenomenon. I would agree that the amygdala is more a "fear center" than it is a "planning center", and the prefrontal cortex is closer to a "planning center" than a "fear center". But the descriptions do not do justice to the processes involved. Better concise descriptions are not possible, not currently and likely not forthcoming. Whether this is a shortcoming of language or of our knowledge in neuroscience remains open for discussion.


Emma Sprooten is a neuropsychologist, as well as member of the Organization for Human Brain Mapping (OHBM) and writes for the Communications/Media Team. The OHBM Media Team brings cutting edge information and research on the human brain to your laptops, desktops and mobile devices in a way that is neurobiologically pleasing. For more information about brain mapping, follow www.humanbrainmapping.org/blog or @OHBMSci_News.
Acknowledgment to Mark Mazo for editing and providing creative input to this post.

*References to names of scientists and universities are fictional, and any resemblance to reality (other than Scottish Western Islands) is entirely incidental.