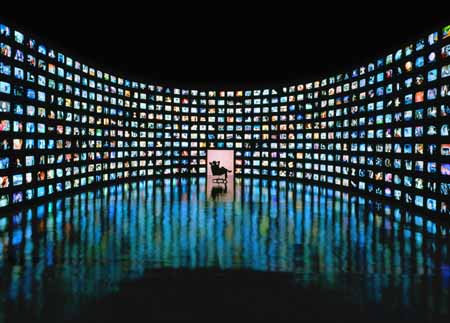 "I think I'll live to see the end of capital letters." That's what Larry Gelbart, creator of M.A.S.H., screenwriter of Tootsie and Oh, God, playwright of the musical, A Funny Thing Happened on the Way to the Forum, said last week when I called last week to wish him a belated happy 80th birthday and talk to him about the future of media. He was referring to the very 21st-century preference for writing e-mail and Web blogs in all lower-case letters, like e. e. cummings. Try it. Key in a small "i." You'll have to arm wrestle with your default to keep it from capitalizing the "i." And why? Because your software is based on English written by someone Larry's age. You know, Superman's age. And what would Superman see from way up there these days? That the Internet is now the thing that is faster than a speeding bullet and more powerful than a locomotive. That reality is now processed for television like a gourmet cheese. That in the American media landscape, human viewers may be the only constant, but it remains hard to tell if media is about them and for them, or only, well, about money. Does it matter? Do we need rescuing? Here's what Gelbart thinks.

Gelbart: The answer to that and almost every question these days is fragmented. Yes and no. One thing about mass appeal that I see happening is that the big screen has a paucity of emotional pieces. Why? Because increasingly, "abroad" is bailing out movies that don't make it over here. Many things are causing it. The subtle differences in language and humor that get lost in translation, for example, make it almost impossible for big companies to do something that will appeal at home and abroad.

The Third Screen: Is this one of the reasons for the increase in the use of powerful special effects rather than powerful language?

Gelbart: Yes. And as the independent films become more and more popular and more and more widely-distributed, they, too, will begin to cost more and become a formula. The global aspect of the big screen now takes in a much bigger market, and it all comes down to economics. I don't think you can name a good picture where the production or the possible promotion isn't "cast-contingent." That means the film needs not just star power but star box office power - what did such and such do in Germany; what's his or her track record in Japan. On television in the old days we talked about three networks. Now there are at least four or five, maybe a couple of wannabe's. Their numbers are down drastically because people have developed a preference for a kind of instant gratification never before available. Now, we can be our own programmers. Increasingly, we've become our own entertainment.

Gelbart: I mean YouTube. Reality television is less honest than YouTube. On reality television, there would be seven producers telling a cat how to lick its paws. But venues like YouTube? That is the real reality. Of course, it's diminished entertainment because we may be born equal but we're not equally talented.

Third Screen: What does all this mean for a writer like you?

Gelbart: You can write something that has continuity, but it makes happy endings all the more ridiculous. There's no time for resolution. If you compare drama, and include comedy under that heading, to music, we've reduced it to rhythm. Without special effects, without lasers and gasses escaping, there is no pop music. I mean there's no substance but you can give the appearance of substance. We all grew up on movies thinking we could get the bad guys, get the girl. How can you present real problems and arrive at real solutions now? I think it makes people frustrated when they have to live their actual lives commercial free and they can't just magically wind up at the part with the happy ending. I think technology is such that we can reach new heights but we need some of the basics of the pre-technological age. It's counter-productive to be able to type a hundred words a minute but not know what the words mean.

Gelbart: Yes. The computer has affected what I write because it's such a wonderful way to work. I remember Stanley Elkin's novel in which he says if computers had existed when he was working, he would have written four more novels. I believe that. I would not suggest we go back. Just that some things are worth carrying over so we don't lose our humanity. But I am on sort of a diet in terms of the Internet. It's the sheer quantity. It's the Niagara of opinion, of information. It's not that I have any kind of compassion fatigue. I just insist on having a life. When I saw Ric Burns' New York I thought that was the most brilliant piece of television I had ever seen, and I continue to think so. It was scholarly without being arch. It was informative. It was entertaining. You know, you just know when you're in the presence of a job well done, when an actor takes the stage or screen with such authority that all you have to do is put yourself in that artist's hands and you know you are going to be pleased. I felt that way about that show - moment to moment. Truly, as long as we are provided with the means to create such works, we're going to be okay. And we haven't said one other thing - these are especially tough times if you love America.

Third Screen: Does media have a responsibility to patriotism?

Gelbart: William S. Paley called television the best cigarette vending machine that anyone ever came up with. I don't think anyone thought the big networks back then had a responsibility other than to generate money for the companies and the companies that got money from the companies. Cable can do some pretty good stuff. It, too, is pretty corporate driven. They want hits just the way the networks do. It used to amaze me. I did three films for HBO and I used to sit there and think 'I'm taking notes from people who make products. How can they pretend to be writers?"

Third Screen: What is your connection to your audience these days? Does everyone's fear that they may be wrong or unfair kill comedy?

Gelbart: Nothing kills comedy. The worse it gets, the funnier it is. Comedy is either your sword or your shield. The worse it gets, the more you shield yourself. I write what I write and I honestly don't care if it gets on or not. I'm writing to see if I can find out some of what I think about any number of situations. I work it out in the writing. I refuse to do anything easy. I'm writing for the smartest person out there. I'm not equating myself with the smartest person out there, but hopefully I'm writing to say you're not alone. I'm not alone. We're not alone. I think the greatest imagination we can exercise is one that imagines how someone else feels. Because you know how you feel, but so often we attribute our own feelings on to someone else. I know one thing - very few writers in Southern California get to write what they want to write. We are more or less worker ants, working for either film companies or tv companies or Internet companies. We do a lot of assigned work. Feelings hardly ever enter into it. If they do, they tend to be on a sort of soap opera level. Is mass appeal important? No, it's not important. Hollywood has found a way through small films to let people write something other than a great ride. As that proves its potential for money making, those pictures will be smothered by new demands. But the audience always surprises you. That's why they are the best collaborators.