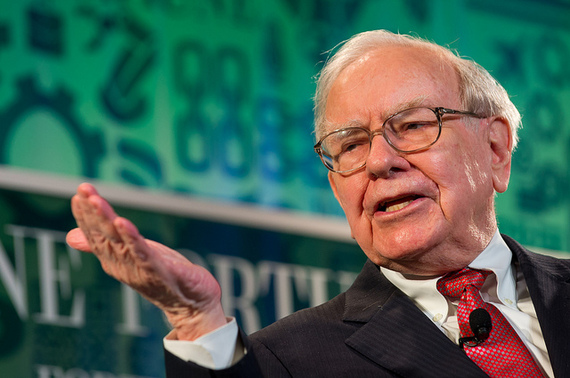 There are many anomalies in investing. It wasn't easy to isolate the three biggest ones, but here are my choices:

1. You love Warren Buffett, but ignore his advice.

Warren Buffett has rightfully been called "the greatest investor of his generation, or ever." Given his cult-like status, you'd think investors would hang on his every word.

For many years, Buffett has been a proponent of index-based investing. Here's what he said in Berkshire Hathaway's 1996 letter to shareholders:

"Most investors, both institutional and individual, will find that the best way to own common stocks is through an index fund that charges minimal fees. Those following this path are sure to beat the net results (after fees and expenses) delivered by the great majority of investment professionals."

This advice was largely ignored.

At this year's annual meeting of Berkshire Hathaway shareholders, Buffett upped the ante. According to The Wall Street Journal, he stated that market-beating investment consultants were usually a "huge minus" for those following their advice. He noted that passive investors will likely outperform "hyperactive" investments recommended by consultants and fund managers.

His advice wasn't limited to individual investors. It applied with equal force to pension funds and endowments that pay high fees to consultants in the mistaken belief they can achieve market-beating returns. He accurately noted that "no consultant in the world is going to tell you 'just buy an S&P index fund and sit for the next 50 years.'"

In 2006, I used the term "hyperactive" to describe the conduct of stock-picking brokers when I wrote The Smartest Investment Book You'll Ever Read. I urged investors to dump their brokers and invest in low-management-fee index funds instead.

Maybe this latest, forceful effort from Buffett will be the tipping point. It would be gratifying to stop the transfer of wealth from those who earn it to those who "manage" it. The securities industry needs to be exposed for its greed and self-interest.

2. You keep doing business with companies that abuse your trust.

MetLife is no better or worse than many others in the securities industry. That's precisely the problem.

On May 3, the Financial Industry Regulatory Authority announced a sanction of $25 million against MetLife for negligent misrepresentations and omissions in connection with variable annuity replacements.

FINRA found that from 2009 through 2014, MetLife Securities misrepresented or omitted at least one material fact relating to the cost and guarantees of its customers' existing variable annuity contracts in 72 percent of the 35,500 replacement applications the firm approved.

These misrepresentations weren't minor. They included telling customers the replacement annuity was less expensive than the current one when it was actually more expensive, understating the value of existing death benefits and failing to inform their customers the replacement annuity would "reduce or eliminate" important features in their existing annuity.

As is the custom when industry players get caught with their hand in the cookie jar, MetLife "neither admitted nor denied the charges, but consented to the entry of FINRA's findings."

The list of settlements involving household names (and others) in the securities industry, for a variety of unethical and illegal behavior toward their customers, is a long one. Misconduct relating to the financial crisis alone was so extensive the SEC maintains a separate compilation of its enforcement actions. Almost every major brokerage firm is on this list.

It's a stunning anomaly that you continue to entrust your retirement savings to those with this extensive track record of abusing your trust.

3. You continue to search for patterns where none exist.

The holy grail of investing is to identify a predictive pattern and take advantage of it to trade profitably. Many in the financial media exploit this fantasy because it encourages you to trade. Trading increases the revenue earned by the brokerage industry, which in turn supports the media through massive advertising expenditures.

Jim Cramer shamelessly leads this effort with columns like this one: "Cramer: Yikes! Scariest pattern in the charts." As usual, Cramer references no peer-reviewed data supporting his reliance on patterns, which is not surprising. It has long been my view that Cramer and others in the financial media who purport to be able to spot predictive patterns, pick outperforming stocks, select outperforming mutual funds and predict the direction of the markets are emperors with no clothes. They do incalculable harm to gullible investors.

There is ample evidence these "gurus" have no expertise that can't be explained by random chance. Cramer's track record is actually worse than a coin flipper would have compiled.

It doesn't caution that this is a fool's errand.

The first step to becoming an intelligent and responsible investor is recognizing these anomalies and refusing to buy into them.