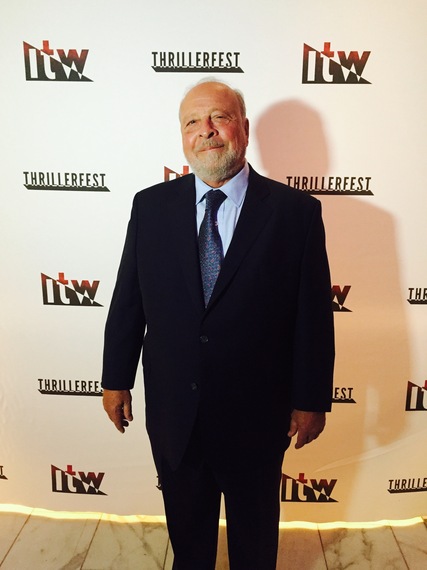 It's become a yearly ritual for me to attend Thrillerfest in New York City, and it was great to spend a weekend with people who not only write books, but love to read them as well. Author Jon Land described the event as "a community of writers and fans coming together to celebrate the genre either by honing their own craft or meeting the masters of the craft."

This year Thrillerfest had 1000 attendees and approximately 65 percent of them were writers. The conference was a very egalitarian affair with numerous world famous writers (Lee Child, R.L. Stine, Kathy Reichs) sitting side by side with fans and first time authors like Alex Dolan, who was there plugging his debut novel, The Euthanist. During an autograph session I met Cathy Raymond, who was carrying two huge bags filled with books by R.L. Stine. "I have seven grandchildren," said Raymond, "and they love his books, so I come here every year."

Thrillerfest honored Nelson DeMille with its Grandmaster award this year and I sat down with him to discuss his new book, Radiant Angel. I've read all of DeMille's work and he always has a unique take on the thriller genre, and his current book is no different. DeMille has ex-cop John Corey on the hunt for terrorists, who in this case happen to be Russian.

"I grew up during the cold war and the Russians were always an interesting threat," said DeMille. We were ingrained with anti-communist ideology starting in the fifties, but if you look at the Russians they're not Islamic or Arab, they're like us. Russia is suddenly resurgent now and I think that's good. It helps create a good balance for us with China and the world of Islam. I think Russia is our natural ally, they just have a bad guy there now in Putin."

In Radiant Angel, Putin sends a bad guy to New York City with a nuclear suitcase bomb, which - in another interesting DeMille twist -- he plans on smuggling through the seaport. DeMille does extensive research for his books and found that New York's harbor is not particularly well defended. "We have no shore batteries anymore, and Coast Guard guns are not big enough to sink large ships and freighters," he explained. "This is a Trojan horse - a back door approach. A ship up to no good can get into just about any American harbor."

Radiant Angel details this in a very straightforward and believable manner, which is why the book is so difficult to put down. Like his character John Corey, DeMille is smart and funny so it was as enjoyable speaking with him as reading one of his books. DeMille and I also discussed books in general and he had many interesting opinions. "Reading is unique. If it wasn't enjoyable, no one would do it. It's still popular, it's just not the first choice of entertainment for most people."

DeMille pointed out that at one time, fiction was racier than any other form of entertainment, which sometimes resulted in unwarranted popularity. "The violence and sex in books used to be far more than you would see in television and movies," he said. That no longer holds true, but DeMille's positive take on that is today's fiction is of much higher quality than what was produced in the 1970's.

Every time I've visited Thrillerfest I have walked out with a large bag of books, all of them well written and on interesting subjects, so I agree with Mr. DeMille. I'm already looking forward to next year.