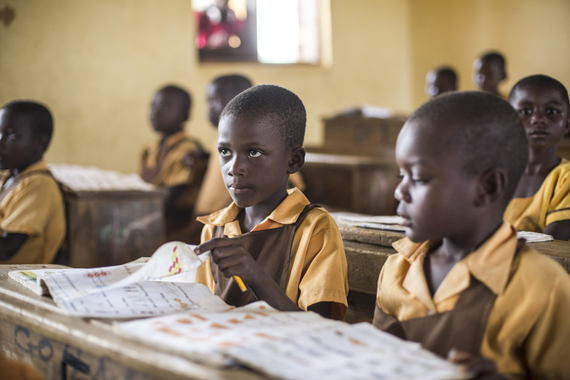 Every generation places hope in its children.

For Africa this could not be more evident as our largest and best-educated generation is coming of age. By 2025, half of Africa's people will be under the age of 25. They stand at the epicenter of the African Union's people-driven agenda for the next half-century: it is they that will build an integrated, prosperous and peaceful Africa.

Leaders of Africa's governments, business and civil society gather in Kigali for the World Economic Forum on Africa meeting this week. They must place young people - especially our most squandered talent, our girls - front and center of public policy discussion. These young people will need jobs, challenges, and outlets for their creativity. Investing in them, and building the "human economies" that can support them with opportunities, is paramount.

Yet storm clouds are gathering on the economic horizon for a number of African countries; the continent faces economic challenges not seen for many years. The need for African government leaders to act, and intervene to tackle the inequality crisis is urgent and necessary. Ordinary Africans are currently prevented from benefiting from the spoils of economic growth, which instead of reducing poverty and delivering shared prosperity is benefiting an ever-shrinking elite.

We had been assured that the continent's positive future would be funded by the resources boom. The appetite for Africa's oil, gas, and minerals, especially in China, was insatiable. As the world economy continued to grow, we were told, Africa would surely benefit. After all, a rising tide lifts all boats. But the reality has not worked out so smoothly.

Growth on the continent is slowing. Government's allowed the wealth that Africa accrued during the resource boom to end up in the hands of the few, not the many; the main beneficiaries of Africa's minerals have been foreign companies. Commodities are no longer in such demand, and the countries which relied upon them are suffering. Zambia, for example, thought it could reap the benefit of the copper boom, and until recently could borrow dollars cheaper than Spain. Now it faces rates of about 10%. Debt levels are high across the continent.

It's clear that longer-term solutions are needed which do not rely upon the whims of the global economy. And as our new paper "Building a Human Economy for Africa" makes clear, tackling economic inequality is paramount.

The richest 10 people in African now have a combined wealth equivalent to the GDP of Kenya, while the number of people living in poverty in Africa has increased by 50 million since 1990. Seven of the world's most unequal countries are in Africa. It is a disparity that is preventing the emergence of a strong and vibrant middle class.

Current tax systems across Africa seem almost designed to entrench inequality rather than decrease it. VAT, a regressive tax paid disproportionately by the poor, makes up on average 67% of state revenues in sub-Saharan Africa. Oxfam is calling for African governments to increase their tax-to-GDP ratio, and to do so through progressive taxation.

African governments should concentrate on ensuring that those with the broadest shoulders carry their fair share. The IMF, amongst others, recommends ensuring better compliance from high-income individuals and companies, alongside other measures. Removing unproductive tax exemptions is another step that African governments can take: tax exemptions to foreign firms are estimated to be costing the Kenyan government $1bn a year.

Crucially, African governments must ensure they prioritize the eradication of tax evasion and tax avoidance. Action plans at a regional and national level must come to fruition. It has been estimated that across the continent $38bn is lost annually in corporate tax revenues. Meanwhile almost a third of rich Africans' wealth - a total of $500bn - is estimated to be held offshore, costing an estimated $14bn in lost tax revenues every year.

It is sometimes possible to read these large figures and not fully take in the gross abuse of human rights that this robbery represents. In people terms, as our research shows, the lost revenue from rich African individuals would generate enough to pay for healthcare to save the lives of four million children, and employ enough teachers to get every African child into school. The global tax reform agenda is yet evolving, as a new tax platform launched by the UN, IMF, World Bank and OECD shows - African governments must ensure they play an active role in ensuring it delivers concrete results.

To build more human economies in Africa, governments must be far more strategic, wise and forward-looking in their expenditure, and build diverse economies that are going to deliver the jobs for the next generation. They must give space to citizens to hold them accountable, and listen carefully to their voices; the voices of the marginalized must especially be amplified.

Investing in vital infrastructure will help to build more sustainable, equitable economies. Core to this for Oxfam is strategic investment in agriculture targeted at the needs of small-scale agricultural producers that meets the Malabo commitment; in publicly-funded and publicly-provided healthcare systems; and in free, universal quality education for all. Tertiary education remains only available to those in Africa who have money. This is not the path of a prosperous Africa that harnesses the abilities of its people.

The biggest winners of such a transformation would be Africa's women and youth. We cannot let their energy go to waste because too many remain uneducated and unable to realize their potential. These steps are proven means by which to liberate women and girls from the gender inequality that keeps them out of the classroom, and prevents us all from missing out on their talents.

For many years, the people of Africa have been asked to look beyond the headlines--the poverty and unrest which have hurt this continent for so long--and instead envision an optimistic future. That brighter future is within reach. But it must begin with the right investments, in the future of the next generation. Africa has the talent, the resources; its people certainly hold the ambition. Africa's leaders must now chart the path to a more human economy.

Oxfam's new report, "Building a human economy for Africa" was launched ahead of the 26th World Economic Forum on Africa 2016 meeting, and can be found here.