What makes a park a park?

Ordinarily, that might be a question for a New York dinner party. Today, it is an urgent legal question before the New York Court of Appeals. For our state's highest court will either save our city parks, by reaffirming a time-honored civic principle, or they will throw it out, and so allow the city to seize countless open spaces long enjoyed as public parks, and hand them over to private developers, without approval from the state Legislature.

Such is the looming consequence of New York University's plan to bulk up its Greenwich Village presence with four huge towers -- roughly 2 million square feet of commercial real estate -- crammed onto the two residential blocks just south of Washington Square.

Though the plan is overwhelmingly opposed by NYU's faculty and neighbors, the city, under Mayor Bloomberg, finally blessed it, handing the university four strips of public parkland for its private use, ostensibly for academic purposes.

The plan's opponents sued the city, since, under an age-old legal code called the Public Trust Doctrine, parkland may not be "alienated" -- meaning, turned into something else -- without explicit approval by the state legislature, approval NYU had not obtained. The university and the city skirted that requirement by claiming that those parks are not in fact parks, since they were never formally "mapped" as such (i.e., not transferred officially to the Parks Department).

According to that view, those strips are streets -- even though they have been used as parks for years, and labeled, funded and maintained as parks by the Parks Department.

Thus NYU's backers used a bureaucratic technicality to get around a democratic doctrine that has helped to green our cities for two centuries, a subset of the Public Trust Doctrine called "implied dedication." According to the state, parkland may be "expressly" dedicated, "through an official act" by city government; or it may be impliedly dedicated, by the public's use of it as parkland over time.

Think of that abandoned local lot that's turned into a community garden thanks to the neighborhood's hard work over many years. 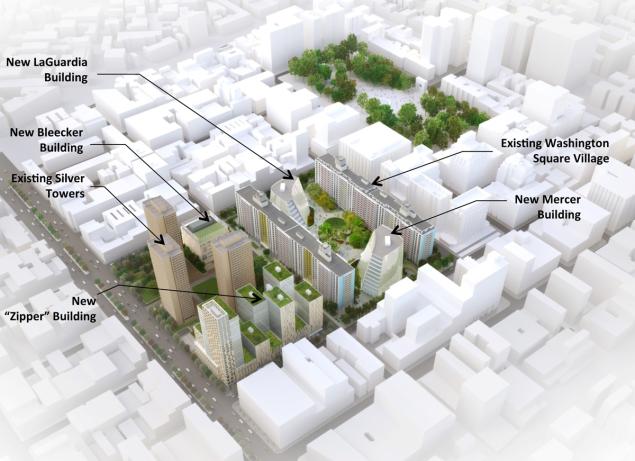 The parks at issue -- "mapped" or not -- are parks. And the city had implicitly agreed, as the plaintiff groups proved, noting dedication ceremonies, press releases, onsite park signs and information on the Parks Department website. (In its brochure for faculty housing residents, NYU itself refers to two of the disputed strips as public playgrounds, linking to the Parks Department website.)

NYU and the city (under Mayor de Blasio) appealed. On Oct. 14, the Appellate Division, First Department, overturned the decision. Those parcels are not parks, the judges ruled, because there was no "unequivocal" expression, or "official act" by the city to dedicate them. The court dismissed the many other actions by the city indicating that intention and downplayed the public's consequent long use of those three strips as parks.

Put another way, the court essentially threw out the doctrine of implied dedication. And so, the plaintiff groups immediately filed a motion with the state's highest court, the Court of Appeals, urging them to take the case, because the First Department's ruling has disastrous implications for us all.

As a Villager, I'm naturally concerned that any of our local parks, playgrounds or public gardens could be wiped out to make way for more construction, since this area already has less open public space than just about any other part of New York City. Overall, our city is park-starved. For every thousand people living in Manhattan, there's only 4.3 acres of parkland -- a ratio that is way below the "big city" median of 11 acres per 1,000 people.

But my concerns transcend this neighborhood and its long clash with NYU. Here, there and everywhere are countless public spaces that have not been "mapped" as parks (some of Central Park itself was long unmapped). If the appellate court's ruling stands, city officials will be able to turn over parcels long and continuously used by the public as parks for other uses without obtaining approval from the state Legislature.

It isn't just our parks that are at risk, but also the Public Trust Doctrine -- the concept that the government holds title to some lands, and waters, in trust for the people. Dating back to the Roman Empire, the concept, in this country, has expanded to protect our ecosystems, energy generation and historical sites, as well as open spaces.

Under this crucial doctrine, We the People have the right to sue the government for shirking such responsibilities. We have seen that doctrine used successfully to save waterways in Hawaii, to force Texas to implement federal greenhouse gas emissions rules and to keep beaches publicly accessible in Maine. The doctrine is essential to the fight against the slow destruction of our public commons.

I am hopeful that the Court of Appeals will understand those stakes, and save not just our Village parks, but the key doctrine that created them, and so much else that makes this city -- all our cities -- livable.

This post originally appeared on the New York Daily News.