For safari travelers, few experiences are more moving than to be in the presence of elephants. One of Africa's most iconic species, they are highly intelligent and social. To watch a herd interact, especially with its youngsters, offers wonder and delight. And not many wildlife encounters can compare with a close-up view of an old elephant bull, whose giant tusks may grow to 10 feet long and weigh up to 100 pounds each. 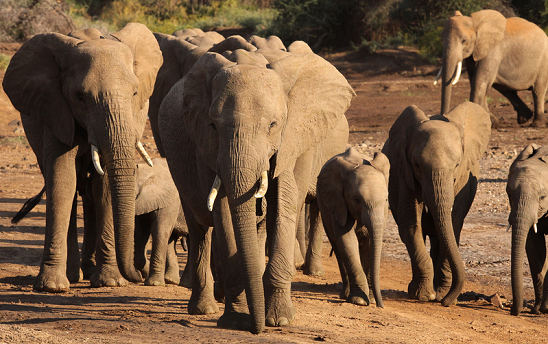 Yet such opportunities are under severe threat as Africa's elephants face an unprecedented poaching siege. It's a crisis of global significance that the U.S. government is taking action against -- and one in which safari ecotourism plays an important role, undergirding the value for local communities of keeping elephants alive. 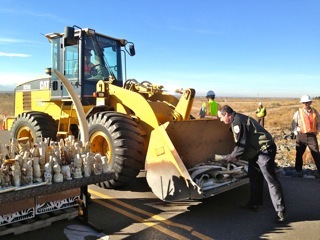 If Africa's elephants continue to be poached at today's rates, they could be wiped out in 10 years. That was the grim news delivered at last week's U.S. ivory crush at the Rocky Mountain Arsenal National Wildlife Refuge in Denver, Colo. On Nov. 14, federal officials placed a six-ton stockpile of confiscated illegal ivory into a massive rock crusher, pulverizing it to drive home the message that trade in illegal ivory will not be tolerated.

The tusks and trinkets, many carved in intricate designs worth millions on the black market, represent the deaths of approximately 2,000 African elephants, according to U.S. Fish & Wildlife officials. That is but a fraction of the elephants killed in the past year alone: some 35,000 have been slaughtered by poachers, at a rate of nearly 100 per day.

"This is a crucial moment in time. What we are seeing today with the decimation of these great wildlife populations is perhaps a harbinger of a world to come," said Daniel Ashe, director of the U.S. Fish & Wildlife Service, at a reception preceding the ivory crush event. 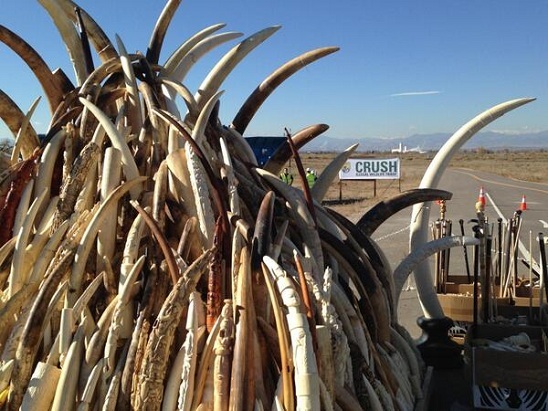 But an alternate future is possible, Ashe said, if we choose to "take care to protect these animals and what they represent for our planet."

U.S. leadership is key in spearheading a global effort, he said, praising the executive order on wildlife trafficking that President Obama issued in July, and the decision to publicly crush the U.S. ivory stockpile.

Most of the demand for ivory comes from an increasingly affluent Asia, whose growing middle- and upper-class populations see ivory artwork as a status symbol. Skyrocketing ivory prices have made the illicit trade so lucrative that many poachers are willing to risk their lives for it. While the elephant poaching epidemic of the 1980s was largely local, regional and opportunistic, said Ashe, today it is a $10 billion enterprise dominated by large, organized criminal syndicates with ties to terrorist organizations, requiring a far greater and more collaborative response than ever before. 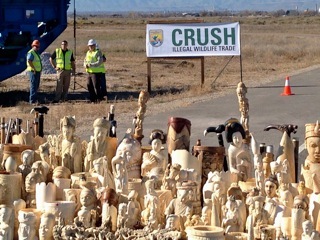 Yet to save the elephant, as well as other endangered species prized by poachers such as rhinos and tigers, it's essential that they be worth more alive than dead. And that will require a shift in values.

A crucial step is an education campaign aimed at Asian consumers, particularly the Chinese, who purchase approximately 90 percent of illegal African ivory. Grace Ge Gabriel, Asia regional director for the International Fund for Animal Welfare, told journalists that surveys indicate 70 percent of the Chinese public does not realize that ivory comes from dead elephants. Most presume that tusks fall out like teeth. Studies also indicate that the population most likely to buy ivory was only half as inclined to do so once they learned that elephants die in the process, said Ge Gabriel.

While shifting the values of ivory consumers is critical to reduce demand, wildlife-focused ecotourism can also play a role in fostering local efforts to protect elephants.

Kenyan wildlife conservation leader Paula Kahumbu said her country's economy is at stake, with 12 percent of revenues coming from tourism. Africans must recognize the value that their wildlife holds, both for economic purposes and intrinsically, said Kahumbu, who heads Kenya's Hands Off Our Elephants campaign with First Lady Margaret Kenyatta.

While Asian demand drives the market, Kahumbu said, Africans must rally to protect elephants, which have historically been revered as "part of our heritage, our identity. But that sense is being lost as Africans modernize," she said. We must restore pride among Africans, and leadership among African presidents."

"The front line is the communities who live with these magnificent animals," said Kahumbu. As long as local people are aiding in poaching elephants -- with often-meager financial reward compared to the high prices the criminal syndicates receive -- the situation is unlikely to change.

While the circumstances are grave for elephants, and the outlook may be grim for future safari-goers as rampant poaching decimates herds, elephants are still plentiful in places with adequate ranger patrols and law enforcement, and a classic African safari can still yield thrilling elephant encounters. Communities play a key role, too: when local people recognize the benefit of wildlife conservation through the economic advantages that ecotourism brings, they become partners in animal protection efforts.

If seeing elephants in the wild is a lifetime travel dream, there's no better time than now to travel to Africa. And in the meantime, learn more about efforts to protect Africa's threatened elephants.

4) Ivory carvings among the artifacts destroyed at the U.S. ivory crush on Nov. 14. © Wendy Worrall Redal