An op-ed published in The New York Times last week (August 23) claimed that revaluation of the Chinese yuan would "make barely a dent in America's trade deficit." This ludicrous assertion flies in the face of basic economic theory and our own economic history. The U.S. trade deficit with China displaced 2.4 million U.S. jobs between 2001 and 2008 alone. Treasury Secretary Geithner should identify China as a currency manipulator, and Congress should pass legislation that would authorize the president to impose substantial tariffs on Chinese goods if they fail to substantially revalue the yuan by the end of 2010.

Currency manipulation by China and several other Asian nations makes their goods artificially cheap and makes U.S. exports artificially expensive in China and in world markets. Chinese foreign exchange reserves, the main instrument of currency manipulation, reached an unprecedented $2.5 trillion this past June. The Chinese yuan or renminbi (RMB) is estimated to be at least 35% to 40% undervalued, relative to the U.S. dollar. With no change in exchange rates and the growth of illegal subsidies and other unfair trade practices, it is no surprise that structural imbalances in trade and capital flows are resurfacing as the global economy recovers from the worst recession in 70 years.

In "The Yen's Lesson for the Yuan," Joseph A. Massey and Lee M. Sands admit that getting tough with currency manipulators can work, as it did in August 1971, when President Nixon imposed an import surcharge and took the dollar off the gold standard. That December, Japan and nine other countries agreed to revalue their currencies.

Yet the authors claim that revaluation did not work in that case because the U.S. trade deficit with Japan continued to rise for the next two decades, peaking in 2006. But this claim misses the point: global currency realignment is needed to reduce the U.S. global trade deficit, not necessarily the bi-lateral deficit with any particular country. And the United States has continuing trade problems with Japan (including cartels and non-tariff barriers to imports) that make it especially difficult to penetrate that market.

Currency revaluation by our trading partners worked in both 1971 and 1985 (Nixon's import surcharge and the Plaza Accord), as shown in the graph below. Following Nixon's import surcharge and the resulting revaluation in 1971 (shown with the first vertical bar), the U.S. current account deficit (the broadest measure of the U.S. trade deficit) was eliminated, resulting in a decade of roughly stable trade balances. These persisted through the first two oil crises of 1973 and 1979, and lasted until 1982, when Federal Reserve Chairman Paul Volker's tight money policies caused the dollar to soar in value. 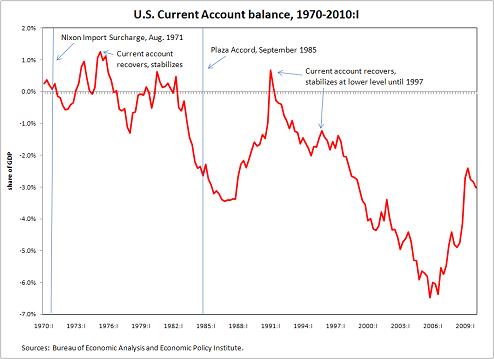 Again in 1985, the U.S. developed large trade deficits after the dollar strengthened against many of the same currencies. The House passed legislation to impose tariffs on imports from countries with large trade surpluses. The mere threat of a tariff persuaded the G-5 countries to enter into the Plaza Accord (the second vertical bar in the figure), which lowered the dollar and the trade deficit over the next two to three years. The current account deficit remained stable albeit at a lower level of about 1-2% of GDP. Then Asian currency crisis hit and dollar soared again. That bubble has never been fully corrected.

Perhaps the strangest thing about Massey and Sands' argument is that it stands basic economic theory on its head. Belief in the price mechanism is perhaps the most fundamental theorem in economics--changes in relative prices should change supply and demand for nearly all goods. The exchange rate is one of the broadest price mechanisms because it changes the prices of all goods between two or more countries. Yet the authors claim that the price of currency doesn't matter.

What is particularly surprising is that Massey and Sands are former U.S. trade negotiators with China, charged with negotiating lower Chinese tariffs and eliminating other barriers to U.S. exports. These negotiations can only be justified on the grounds that they will increase U.S. exports or market access in China. Their work as trade negotiators implies that small changes in the prices of a few products can increase exports, but their article claims that large changes in the relative prices of all imports and exports will not affect the trade balance. This makes absolutely no economic sense.

Massey and Sands have substantial business interests in China. They direct Sierra Asia, a consulting firm that "has represented more than 50 major corporations in China from the U.S., Europe, and Japan," who are "establishing and maintaining successful operations there." Massey and Sands represented Sierra at a China business forum in Memphis last month sponsored by the U.S. Chamber of Commerce and its local affiliate. Were the RMB to rise by 35% to 40%, to its fair market value, global corporations would have less interest in outsourcing production to China and Sierra Asia's fees on such deals would decline.

The op-ed by Massey and Sands is part of a larger campaign by the Times editorial page opposing efforts to get tough with China on currency manipulation. On August 15 they published an editorial on the "Return of the Killer Trade Deficit" which said that the United States needs to correct its longstanding trade deficit with the world. However, they claimed that moves to impose tariffs would be a "bad way to address the problem," instead they call for jawboning rich countries to increase demand. They also argue that the United States should rebalance spending and saving. But the United States possesses no policy tool that can directly influence either demand in other countries or spending and saving in this country. But we can directly affect exchange rates, by imposing (or better yet, threatening to impose) import tariffs.

Paul Krugman responded immediately to the Times editorial on his blog, where he said that China is practicing "a seriously predatory trade policy" and that we should confront the China currency "issue head on." He noted that if it leads to trade conflict, "surplus countries [such as China] have a lot to lose from such conflict, while deficit countries may well end up gaining." Krugman had previously called for the United States to threaten China with a 25% import surcharge if it refuses to revalue.

I responded to the "Return of the Killer Trade Deficit" with an (unpublished) letter to the editor that summarized the history of U.S. currency interventions in 1971 and 1985. I have reviewed this history in several recent publications, including recent post on this blog, "U.S. jobs depend on China revaluing its currency now."

The Times appears to view the currency manipulation problem as a foreign policy issue in which relations with countries like North Korea assume more importance than the economic damage being done to the United States by currency manipulation. It argued that we should take care to avoid conflicts with a country that is fast developing one of the largest economies in the world. However, Chinese currency manipulation is a disease that is eating away at the core of the U.S economy, and threatens the nascent global recovery. Unchecked, it will lead to the development of new bubbles in the U.S., Chinese, and global economies. We need to demonstrate to China that we have the strength and resolve to address this issue directly. Once it is settled, the path will be cleared for much closer cooperation on the host of diplomatic issues that crowd our bi-lateral diplomatic agenda, from North Korea's nuclear weapons to re-unification on the Peninsula, to weapons proliferation in Iran and China's relations with rogue nation/states in Africa.

Currency realignment works because it reduces unfair competition from imports in this market, and because it makes U.S. exports more competitive on world markets. A number of economists have estimated that ending currency manipulation by China and other countries can create at least 1 million jobs, increasing U.S. GDP and sustainable growth while helping to reduce both U.S. trade and budget deficits. As GDP rises (by 1% to 1.5% according to Krugman), wages and tax receipts will rise and spending on unemployment insurance and other forms of public assistance will decline.

The United States also needs to rebuild U.S. manufacturing by investing in R&D, clean energy, infrastructure, and workforce development. We also need to put an end to illegal subsidies and other unfair trade practices by China and other countries. This will create domestic demand for manufactured goods, develop new products that we can sell to the rest of the world, and open those markets to goods made in America. Over the past decade, other high-wage, developed countries such as Germany have maintained large manufacturing sectors with rapidly growing exports and a growing trade surplus. We need to learn from those successful players as we rebuild world-class, competitive manufacturing industries. The first step is to create a level playing field by rebalancing exchange rates with China and other countries, and that won't happen without the threat of tariffs or other import restraints from the United States.

EPI is a non-profit think tank that receives the majority of its funding from foundation grants. It also receives financial support from U.S. labor unions and industrial associations that would benefit from a rising yuan and a falling U.S. trade deficit.