With the City of Chicago at its eastern edge, Rockford in the middle, and the Quad Cities in the west, northern Illinois is the most populated and developed area of the state. Darkened corridors of abandoned factories, old farmhouses, and foreboding roads offer a stark contrast to this image of progress, however, and there is a lot more to this region than the bright lights of the city. As we at Mysterious Heartland can attest, northern Illinois is also rife with ghost stories and haunted places. Which will prove to be the scariest of them all? 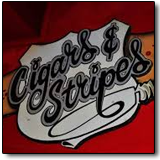 Cigars & Stripes has been a long-time haunt for Berwyn beer and cigar aficionados, but its owner and his customers believe it may also be a haunt of a different kind. According to an article in the Berwyn/Cicero Gazette (available on the Cigars & Stripes website), several customers have seen a "shadowy figure" without arms or legs floating down the hallway toward the door leading to the beer garden. Ronn Vrhel, owner of Cigars & Stripes, has heard phantom footsteps on the basement stairs as well. Ronn's wife has also heard shouts and sounds of a party in the basement when no one was present. The ghost of Rose, a former owner of the establishment, is believed to linger in one spot at the bar and play "match maker." She is even credited for bringing together at least one pair of newlyweds. Typical poltergeist activity, such as glasses tipping over and lights turning on and off, has been experienced as well. The paranormal research team Supernatural Occurrence Studies recently investigated the location and walked away convinced that the reported hauntings were real.

Built in 1858 by Colonel Gustavus Palmer and his wife Henrietta, two generations of Palmers lived in this stately home. Mr. and Mrs. Palmer died within a few days of each other in 1884, and their son lived there another two decades before following them to the grave. The home was rented for the next few decades, until it was purchased by the city and became home to the Crystal Lake Historical Society. Oddly, the ghost stories associated with this home do not involve the Palmer family. According to legend, the house once served as an orphanage. The supervisor there was very cruel and abused the children. He punished them by locking them in the basement, where some allegedly died. To this day, it is said, the sound of children crying can be heard coming from the basement. The sound of children stomping on the floor or scratching on doors has also been heard. Some visitors have seen sad, cherubic faces peering through the basement windows. 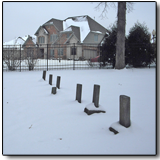 Shortly after construction was completed on the Fox Run Subdivision, some residents began to report eerie encounters. Most of these encounters centered on the tiny cemetery at the southwest end of the subdivision, but some -- notably ethereal singing, knocking, and a physically aggressive phantom wearing an old-fashioned suit -- were experienced by at least one resident in her home. The Fox Run Subdivision had been built over the former site of the Illinois State Training School for Girls, which operated between 1893 and 1978. The purpose of the "school" was to rehabilitate juvenile girls who had been convicted of a crime in the Illinois court system.

Inevitably, deaths from illness and suicide occurred at the facility over the course of its 85 years in operation. Girls without families, or who had been disowned, were buried in a cemetery on the property. Several infants were buried there as well, and today the cemetery contains 51 graves. Since the 1940s, visitors have reported seeing red eyes in the woods around the cemetery, as well as the specter of a woman in a white gown or flowing dress in the cemetery itself. Others have heard a crying infant. The developers of Fox Run agreed to maintain the cemetery in perpetuity, so it will always remain as a reminder of what was once there.

Find out where the rest of northern Illinois' most haunted places are at Reboot Illinois.