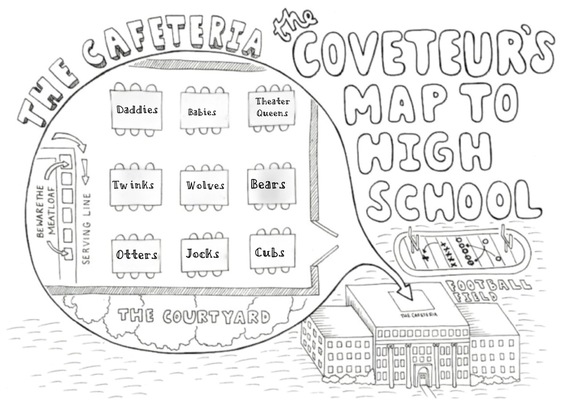 In a community built atop the notion that we all have some shared understanding of what it feels like to be different and face some sort of discrimination, why do we feel the need to constantly cut each other down?

Since coming out, I have encountered many different types of gay men, because, as is true in all communities, no one is exactly the same, and within the broader gay community, as in any other large community, there are in fact subcultures that exist.

However, what has boggled my mind is that there seems to be some sort of hierarchy within the gay community, or at least a never-ending amount of cliques -- you know, those things that existed in high school.

And it is here that we find why we are so competitive as a community.

1. Upon coming out, we have a second adolescence.

Growing up, few of us got to date like our straight peers and experience sex, drinking, drugs, etc., with people we found attractive, so, upon coming out, we go through a second adolescence. We often move to a big city, where gay is OK, or at least less stigmatized than in the small suburbs and rural farms where we grew up. We finally get to find out that there are people like us, and also a lot of people who aren't.

If we were actually adolescents, the problems wouldn't be as big, because we'd have to answer to our parents, but because we are adults making our own money, we don't have anyone regulating us. Having no one to answer to when you have endless opportunity is akin to being a really rich kid in a candy store, and, well, that just creates monsters on sugar highs.

2. We separate ourselves into subcategories.

We have wolves, otters, bears, daddies, babies, twinks, twunks, jocks, and a never-ending list of categories that ultimately say one thing: We aren't equal; we are separate.

We may cross paths, but we tend to stick to those cliques that match ourselves, which, from a sociological perspective, makes sense. Comfort comes from understanding something, and we tend to understand ourselves better than someone we don't know.

However, we are reverting back to an immature notion that if someone doesn't look like us, then we can't understand him or her, when frankly that is not true.

3. We struggle with notions of masculinity and femininity.

We are using outdated ideas about what it means to be masculine and feminine to classify a group of people who do not fall strictly into either category, as most don't in today's world.

We internalize homophobic ideas about how "masc" or "straight-acting" a man should or should not be, when in fact both of these terms are ridiculous, as straight people do not claim to be "acting" at all.

4. We are obsessed with looks and perfection.

So much of gay life revolves around appearances: what you look like, what your friends look like, where you are hanging out, what you are doing, etc.

Sure, there are different personality types, different interests and different activities that these groups like to partake in, but it all seems to go back to a classification system and an obsession with finding the most "fabulous" and perfect versions of each of these things.

5. No one explicitly knows our past...

...unless we decide to share it, of course, but even then it is a one-sided version of what happened.

If we were more honest about our pasts, we would see that we all are more alike than we could ever imagine, because we did face the same discrimination and bullying.

6. Success makes you unpopular in a world where popularity apparently is still a thing.

As gay men, we work so hard to prove to others, and ourselves, that we are in fact amazing, because, growing up, we were told by ourselves and others that we were anything but. However, once we get to the place we dreamt of for so long, we often find that those who were not so friendly become extremely friendly for self-serving purposes.

Furthermore, you find that the better you are doing professionally, romantically, or whatever the case may be, the more everyone else around you has something to say about you.

7. We create prejudices and separate ourselves.

We often create a level of competition that becomes so fierce that it hurts us as a community rather than pushing us forwards, because we create subgroups within subgroups to classify our own community.

It's not just the wolves, bears, otters, and the rest of the animal kingdom. We sort ourselves by age, profession, interest, neighborhood, etc., and those distinctions become how we see one another.

Superficial things that have nothing to do with who someone is on the inside add up one's valence in such an excessive way that we often think of someone based on insignificant things.

8. Everyone is every kind of possibility.

Whether sexually, romantically, platonically or professionally, we can all fill each others needs in multiple ways that do not exist in the straight world.

We often come into a new group thinking, "Maybe one of these guys could be my boyfriend, or at least someone I'm into." However, someone may find you attractive but you do not look at them the same way, so the dynamic is thrown, because you would rather be friends while the other person would rather have sex. Thus your purposes do not match.

This has become something that is more prevalent in today's day and age because of social media, but every gay man seems to know, or at least to have seen, every other gay man. And if for some crazy reason you do not know each other, there is like one degree of separation.

Facebook, Instagram, and LinkedIn even suggest that you know X person because, well, he's gay. However, what this means is that we think we know each other when we in fact do not.

10. Our exes and friends can date each another.

Building upon the idea that everyone is a possibility and connected, I'd add that we can date each other's exes in a way that the straight world will never experience. Sure, a girl can date her best girlfriend's ex boyfriend, but the two never had a romantic connection that makes the relationship way more complicated.

We can become each other's partners, sexual conquests, best friends, and ex-boyfriends. Our ex can date our best friend, who was someone we could have been dating at one point. The relationships that exist within the gay community are so complex and run so deep that it feels like we are constantly surrounded by no one new, and in an endless connect-the-dots game that feels both familiar and obscenely disgusting.

The list could truly go on and on, but what we need to remember is that none of these points should be used as an excuse for cutting each other down.

We need to remember that we all face the same discrimination, that we want the same rights, that we all want success, and that if someone in our community is doing well, we should applaud them and give kudos, not gossip like children. When someone else succeeds, it doesn't mean your chance for success diminishes. Rather, it means that your path toward success has been lit by a light even brighter than before.

Well, the thing is that you can. You just have to get out of your own way, stop focusing so much on others, and live your life for you and no one else.

When you find your authenticity and get over the cliques, the classifications, the notions of masculinity and femininity, what you find is that you are simply you, an individual who wants happiness, love and respect. You won't feel the need to tear others down but the desire to build them up higher and higher.

We must go back to being a brotherhood before it's too late, and claim our pride in a new way. Let's lose the labels, because they further perpetuate stereotypes that were put on us to make us look like savages, animals, deviants. Let's lift each other up. Let's make each other proud. Let's define a new way to be gay.