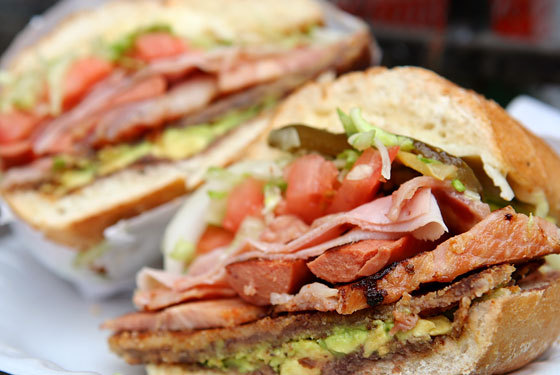 
Just, look. Look at that torta. Tell me that is not a sandwich you immediately want to stuff into your mouth until it's gone (unless you are vegetarian, and if so, I GOT YOU COVERED).

A torta is a broad class of Mexican sandwich that is usually offered with many different choices of filling. According to Daniel Maurer over at Grubstreet, "A torta should weigh roughly the amount of Infinite Jest (paperback is fine), and you should be completely covered in it after just a few bites." Tortas are so huge and messy that you really shouldn't eat them in the company of those who would be scandalized by you licking your fingers (and hands and possibly arms) while you eat.

The photo specimen seems to have milanesa (meat, usually beef, pounded thin, breaded, and fried), salchichas (this supposedly translates into "sausage"... it's hot dogs, y'all), griddled ham, more ham, tomatoes, avocado, refried beans, lettuce, jalapeno, and what could be cheese. I'd also slap my sister* if it didn't have mayo on it. In case you weren't keeping count, that's all of the good things stacked between two halves of a roll** that are gloriously toasted and just substantial enough to mostly hold your sandwich together until you're almost done, but not so substantial you can't bite through it cleanly. The meats vary from sandwich to sandwich, but the condiments pretty much stay the same. Before you eat, as if all that weren't enough, you slather that sumbitch with freshly-made salsas.

How does all this taste together? It's sweet-salty thanks to the meat, but not too salty thanks to the fresh toppings; greasy enough to be foodgasmically-indulgent without being a gut-bomb; spicy, but not set-your-mouth-aflame spicy. There's nothing froo-froo or questionably likable on the torta (unless, again, the meat thing gets in the way-still got you covered, read on). It has basic sandwich ingredients, but those ingredients are good quality and put together in the best possible way. And the meat? Isn't any limp ol' deli cut that's been sitting around in plastic wrap for a month. No ma'am-or-sir, that meat was very probably cooked by a person who works in that restaurant. (Okay, so they don't make the hot dogs from scratch, but you get real steak instead of Cryovac roast beef loaf. If you're very very lucky, you get carnitas.)

And you get refried beans directly on your sandwich. I don't know who came up with this idea, but that person should have his or her own holiday. A holiday on which we all get free tortas.

Don't eat meat? My food guru J. Kenji López-Alt over at Serious Eats has you covered with not one, but two vegan torta recipes that almost any respectable food-lover would love to chow down on, vegan or not. Once you get the basics down with tortas, though, you can add all kinds of fillings to make the vegetarian sandwich of your dreams. 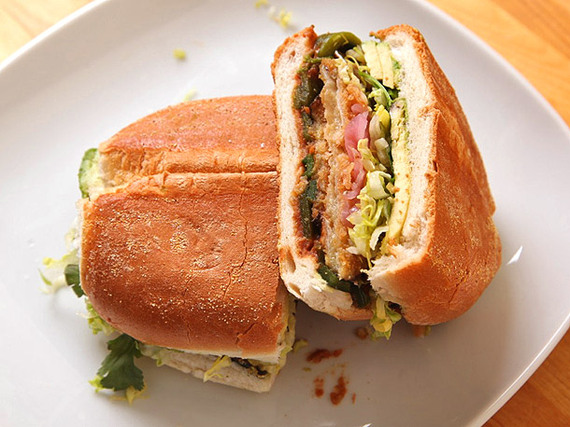 This giant, messy, stuffed-with-home-cooked-goodness sandwich tops my "Best Sandwich" list by a lot. What about you? Are you a torta fan? If so, I have a major question for you: dry or drowned?

*I don't have a sister, but this statement stands.

**Sometimes you find places that use French bread because they can't get torta bread; it really does not work for this sandwich, though. If you absolutely can't find an appropriate bread to make a torta, sub something like a ciabatta roll; French bread is way too chewy.