Try to imagine Grumpy Cat as a professor of German literature at an Ivy League university, haunted by deep misgivings about his role in academia. Now imagine that he has opposable thumbs, an iPhone and a love of wry German aphorisms, and you might end up with something pretty close in spirit to Eric Jarosinski's Twitter feed, @NeinQuarterly. Nein's avatar is a stylized rendering of lovable Frankfurt School misanthrope Theodor W. Adorno, who is depicted sporting a monocle that he didn't wear in real life, but plausibly could have. From behind these impassive staring eyes and disapproving expression streams a series of witty tweets inspired by the self-serious stereotypes of German literature and academic life, the sometimes hilarious length and labyrinthine complexity of German vocabulary and grammar, and a generally bemused take on the vagaries of life on the internet. The phenomenon of @NeinQuarterly has been profiled in The New Yorker and on Slate, and as of this writing he has over 76,000 followers. One of his widely-retweeted classics: "At Starbucks, I order under the name Godot. Then leave." My personal favorite: "Nothing is sacred. Don't fuck with it." 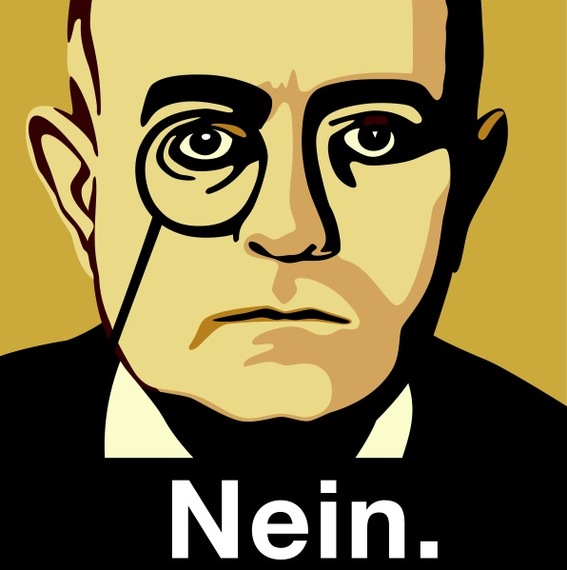 Jarosinski is big in Germany, to borrow an honorific usually reserved for David Hasselhoff, in part because his brand of word play and insight into German language and culture are an artfully-constructed bridge to the English-speaking world that has long been missing. Although English has a number of evocative German loan words like kitsch and wanderlust, Americans seldom study German in high school or college, and as a result, our feeling for German as a language is largely superficial and often freighted with negative clichés derived from wartime cinema where German characters bark orders and insults. And if it's not that, it's "Sprockets." With a cultural portrait so coarsely drawn and lacking in subtlety, it is little wonder that Americans tend to lack a nuanced appreciation of German language and humor.

For the last seven years, Jarosinski was an assistant professor of German at the University of Pennsylvania where he taught classes on topics like Weimar drama, Nietzsche and Marx. None of this would make for light reading in English, let alone German. While hard at work on the book he needed to complete in order to be granted tenure, he faced a case of self-doubt and writer's block so severe he began to question whether academia was really where he belonged. Though he loved teaching (and was recognized for it), the stilted rituals of delivering conference papers and publishing research in almost comically obscure journals seemed to suck all the joy out of the subject he loved and to which he had devoted his life. He is not, as some stories about him have implied, leaving his job in any literal sense to become a professional aphorist -- indeed, he was on his way out before @NeinQuarterly really began to take off, though without a particular trajectory until recently. The timing is simply a happy accident that seems to affirm there is a larger (and more enthusiastic) audience for the words and wit of German studies than the Modern Language Association. Though he feels some angst about the future (appropriately enough), he now has an agent, a publisher and a manifesto in progress, and has been making the rounds on German television and venues like NYU's Deutsches Haus. He also writes a regular column for Die Zeit, one of Germany's most prestigious newspapers.

For most academics with tenure-track jobs, leaving it all behind might seem unthinkable. Having recently made a similar (though somewhat less drastic) choice myself, departing from a full-time curatorial position to start a new freelance venture, I've had my share of those conversations. People sometimes tell me privately that they long to leave the institutions where they work, but can't see their way clear to do so, for financial, cultural or professional reasons. It's certainly true that not everyone is cut out for the freelance life; while I've found that I actually enjoy the hustle and flexibility, the sporadic nature of the work probably wouldn't fly if I had three kids to put through college. For those who do it and for whom it works well, however, it can be a revelation. This is what Jarosinski and I discussed a few weeks ago in Philadelphia (on the eve of my first trip to Germany) over a few beers, and what he's busily crafting as I type. His love of teaching seems to point in the direction of some academic affiliation, but freedom from the tenure track is attractive to him. What he loved most about German from grad school onward was the wit and insight of some of the language's great aphorists like his alter ego on Twitter, Adorno, who coined phrases like "the culture industry" that we bandy about in English today. Or Adorno's 18th century antecedent, polymath Georg Christoph Lichtenberg, who was described by admiring contemporaries as a "Universalgenie." The enlightenment ideal of the cultivated gentleman of science and letters couldn't be more different from the reality of a beleaguered academic, navigating Byzantine minefields of feuds and passive aggressive communication (or lack thereof), and above all, a skeptical disdain for pleasure in any form.

Ironically, it was a 21st century platform that put Jarosinski back on the path to reconnecting with the thinkers he most admired in German literature. The creation of @NeinQuarterly may have been the most productive act of procrastination of his whole career: tweeting, and the challenge of fitting a perfectly crafted observation into 140 characters or less, felt akin in tone to the short aphoristic texts by Adorno and Nietszche about which he was attempting to write his book. Adorno's 1951 Minima Moralia: Reflections from Damaged Life includes such compact masterworks of snark as: "In psycho-analysis nothing is true except the exaggerations." Just a few lines down the page, he surprises the reader with this sentiment: "Beauty of the American landscape: that even the smallest of its segments is inscribed, as its expression, with the immensity of the whole country." As a German-Jewish exile from World War II, Adorno experienced alienation and loss, but wrote through it with humor and a love for ideas. @NeinQuarterly's voice, which, as the name implies, is that of rarified, non-existent academic journal, is a critical one that's willing to laugh at itself, to take its subject seriously and to enjoy it fully, without contradiction. This position is not meant to denigrate academics, or their work, or the importance of serious study in the interest of mastering a new language and fully appreciating its literature and culture. It's simply a recognition of an affective dissonance between academia and self: it works for some, but it ain't for everybody.

Still, I like to imagine that the collected works of @NeinQuarterly will make their way into a dissertation one day, perhaps written by an earnest graduate student interested in U.S.-German cultural relations as mediated by the internet in the 2010s.

Here's hoping that his or her defense committee gets the joke.