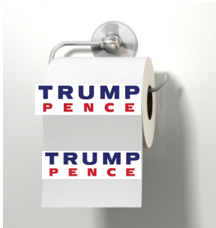 Yes, I mean the toilet paper ticket. From now going forward I will refer to the Trump/Pence ticket simply as the TP ticket. Something that Americans should flush down the toilet. LGBT Americans in particular. Of course, Trump's thoughts on Mexicans as rapists, a ban on Muslim immigration, or the infamous wall, also alienate the majority of voters in America.

With the pick of Pence, Trump doubled down on the anti-LGBT policies adopted in the Republican platform this year. The platform says children "deserve a married mom and dad," and refers to "natural marriage" as between a man and a woman. The platform further calls for a constitution amendment to overturn same-sex marriage, appointing Supreme Court justices that support traditional family values, restricting access to bathrooms by transgender Americans, and conversion therapy for LGBT children.

Surprisingly Republican LGBT leaders have reacted negatively to the platform. "There's no way to sugarcoat this: I'm mad as h--- -- and I know you are too," Gregory T. Angelo, the president of the Log Cabin Republicans, wrote in a fundraising email sent Tuesday evening. "Moments ago, the Republican Party passed the most anti-LGBT platform in the party's 162-year history." All LGBT people should flush TP.

Pence embodies the anti-LGBT platform and Trump knows it. The VP candidate personifies everything that is wrong with the Republican Party with respect to the gay community; he signed the Religious Freedom and Restoration Act (RFRA) in 2015. RFRA was basically a law that would have allowed people to discriminate against LGBT people. You know like refusing to make wedding cakes or saying we don't serve LGBT people at this dry cleaner.

Pence defended RFRA until the unprecedented national backlash against the discriminatory law. Pence relented and made changes to RFRA after organizations like the NCAA, Apple, Salesforce, Eli Lilly and Anthem, to name a few, cried foul. Some governmental organizations even suspended taxpayer funded travel to Indiana. But Trump thinks Pence is the perfect VP candidate. What does that say about what Trump thinks about the LGBT vote?

This presidential election season, I implore all LGBT people to call out their brothers and sisters who support the TP ticket. No more accepting the excuse that an LGBT person is voting for the Republican Party because they are a fiscal conservative. You need to ask your LGBT Republican friends to justify the party platform and TP's implicit acceptance of it. As if any LGBT Republican would have the cajones or tubes to actually say they are Republican at this point.

I can't wait to see the TP ticket circle the bowl in November. An energized LGBT vote will make all the difference.