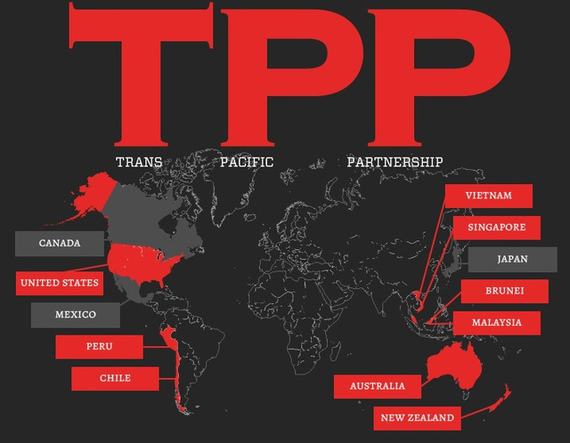 America is at a crossroads in the global economy. The debate over the Trans-Pacific Partnership (TPP) highlights the sharp divisions in Congress over trade, as well as the important stakes for America's economic future. Few would argue that the United States needs to compete aggressively in the global economy. While we are still the world's largest economy (with China nipping at our heels), we no longer dominate as we did over the last half century. The challenge is how to compete effectively and still maintain our standard of living, environmental controls and, ultimately, our values as a society.

Although everyone would like to see the return of decent-paying jobs, the fact is that many of those jobs are gone forever, thanks to globalization and advancing technology. For the past twenty years, middle-class incomes have stagnated. There is little hope for restoring the middle class, or even halting its decline, except by growing the economy. Even a heavy dose of government stimulus will have to be paid for with economic growth or taxes, and taxing billionaires or even large corporations will not be enough to restore the health of the middle class without economic growth. And, however you slice it, economic growth will require vibrant global trade.

There are objections to the TPP from both sides of the political fence. Progressives decry the weak labor protections and environmental controls. Conservatives see loopholes for more liberal immigration policies. And both sides believe that the proposed agreement favors big banks and corporations over average folks. Much of their criticism is valid, and there is a lot that the White House can do to strengthen the accord. However, there are also serious limitations to our negotiating position, and we should lower our expectations about what the TPP can actually accomplish.

What the TPP cannot do is resolve income inequality, improve the environment or stop illegal immigration. While these trade deals often come with rules of behavior for the signatory nations, getting the rules enforced is another matter. Sure, we will have some leverage over what Singapore, Malaysia, Australia and Chile do in the area of human rights, labor relations, environmental regulation and immigration control, but most of their policies will be determined by their own national interests and domestic politics. So the reality is that no trade deal is going to deliver everything, or even most, of what the critics want.

Furthermore, American manufacturing workers - who stand to be the big loser in this trade deal - are likely to get the short end of any trade deal. There is simply no way to protect American workers in the long run from foreign competition, deal or no deal. What the administration can do is provide the help and support that workers need to either transition to other sectors of the economy or provide them a safety net. But protecting jobs from global competition is a virtually impossible task, whether or not there is a trade deal. While there may be somewhat more hope on the environmental front, that is still a steep climb, as are tighter controls to prevent illegal immigration.

Clearly, as Hillary Clinton has said, the President should "listen to and work with his allies in Congress, starting with Nancy Pelosi, who have expressed their concerns about the impact that a weak agreement would have on our workers to make sure we get the best, strongest deal possible. And if we don't get it," said Clinton, "there should be no deal." Clinton has offered wise advice, which those on both sides of the political aisle should consider. Note that she said Obama should "listen and work" with his allies to get the strongest deal possible. But that doesn't mean they should kill the fast track legislation.

Killing fast track would effectively kill the deal, for several reasons. First, our negotiating partners will realize that they are negotiating with an unwieldy and dysfunctional Congress, a dubious partner at best, rather than with the President. Secondly, even if our negotiating partners continued the talks and Obama gets an acceptable deal, it would likely get bogged down in the Congress over partisan wrangling - not enough labor protection, too many loopholes on immigration. It's unlikely that anything would pass, and then only after a lengthy and bitter fight.

An up or down vote on an eventual trade pact would not guarantee that we get a good deal, but it would at least hold out the possibility of any deal at all. Even with fast track, Congress will have a big fight over the ultimate pact, but the chances of passing it would be increased somewhat. There is absolutely no doubt that this country faces serious issues of income inequality, the loss of middle-class jobs, the corruption of government with big money, the degradation of government and a broken immigration system. But killing a trade deal when it offers at least the hope of a better future for the American economy is not the way to fix those pressing problems.