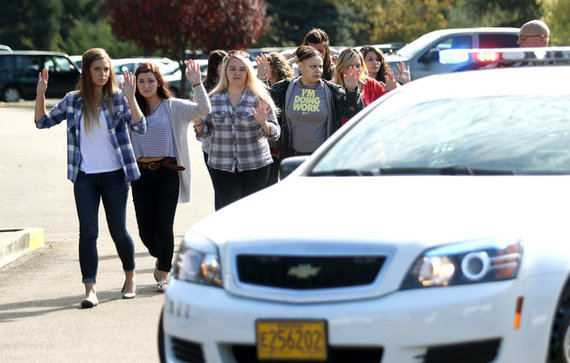 USA has bled again in Oregon and if things continue the way they are, it will continue to bleed in the future. But though earth shattering this tragedy is, something is even more horrifying. The real tragedy is the strange inability to do what needs to be done despite enormity of the situation. And what aggravates this real tragedy is continuous obfuscation of the issue by some sections in the right-wing media who are determined to attribute gun violence not to easy public availability of guns but to mental ailment. They are also trying to prove that gun control laws would infringe the rights of genuine gun enthusiasts.

Even as the details of the latest horrifying tragedy unfold, the narrative which is being peddled is that gun laws won't be able to solve the problem as the case of Chicago is supposedly showing. The irony is that it is gun violence which is responsible for more killings in Chicago and yet it is the gun laws which are being blamed here. In fact Chicago's example actually shows that not only we need even stricter gun laws but more importantly also need to augment these with other steps.

Gun laws proposed by President Obama are futuristic in nature as they aim at regulating gun sales from the time of implementation. Of course they cannot reduce the number of guns which have already been sold and are in circulation but gun laws are a step in the right direction. Yes, we also need to augment these laws with extra measures, but to suggest that better laws won't do anything or worse will actually aggravate the situation is faulty framing of the issue.

The most flawed narrative is that increased gun ownership actually "deters" criminals or mass shooter. In reality the criminals are more likely to shoot if they suspect that their target is armed. A simple mugging can transform into killing if the criminal finds out that his target may be armed.

With respect to school shootings, these are going to increase if literally anyone can have access to guns. The narrative perpetuated by people like Donald Trump that what we need is better treatment of mental disease instead of tighter gun laws is problematic because mental disease on its own cannot kill at mass scale. It is only when people with psychological problems have easy access to dangerous weapons that they become lethal. Yes, you need better treatment for mental disease but you also need to ensure that not everyone who is mentally ill has easy access to guns.

And despite everything somehow or the other, the issue keeps on getting derailed due to the NRA-sponsored narrative that in order to fight gun violence, we actually need even more guns! So is this logic true that more guns are needed for countering gun violence?

About one year ago, I wrote an article on Huffington Post in which I tried to make a case for gun control. My major "mistake" was to point out that even a developing country like Pakistan which is facing a lot of extremism does not have such relaxed gun laws. Unfortunately that comparison deflected the entire discussion from the real topic and everyone started to get angry over the fact that how come a foreigner (and from a problematic developing country at that) is trying to advise Americans.

I also got some emails telling me to do proper research before writing. Since I am a PhD student ( Political Science), I decided to do a proper empirical study with U.S. states as my unit of analysis. I have completed it and I am right now in the process of refining it after which I will send it for publication. Needless to say, the study which uses statistical techniques merely proved what is true intuitively also: Higher number of guns does lead to increase in number of homicides. The relationship exists even if we control for factors like education, poverty and crime rate. What I have found out is nothing new as many published studies have come to the same conclusion.

Unfortunately, despite intuitive and theoretical appeal as well empirical evidence, the issue of gun control has not been able to achieve the kind of consensus which is right now needed. The Second Amendment is being constantly cited as a justification for opposing gun control laws. The fact is that Obama's proposed laws DO NOT infringe upon the Second Amendment as they merely regulate the right to bear arms by establishing some basic criteria with respect to background checks and type of weapon one can possess. After all every right in this world comes with certain criteria and even right of ownership of a motor vehicle is governed by some rules and regulations.

I think one of the major problems has been the failure of those who are pressing for better gun laws to convince gun owners that the proposed gun laws do not infringe upon the freedom to bear arms.

In fact if genuine gun enthusiasts try to think rationally, gun control laws would help them also by ensuring that their passion is not misused by psychopaths, who may end up making them ( gun owners) as villains . There is a possibility that if nothing is done, and the mass shootings continue, eventually the public opinion which is right now divided may swing too much against guns. And if it does so, then gun enthusiasts may end up getting more than they bargained for.

President Obama is totally right when he said the following words

"When Americans are killed in mine disasters, we work to make mines safer. When Americans are killed in hurricanes and floods, we make communities safer. When roads are unsafe, we fix them to reduce auto fatalities. We have seat-belt laws because we know it saves lives. The notion that gun violence is somehow different -- that our freedom and our Constitution prohibits any modest regulation of how we use a deadly weapon when there are law-abiding gun owners all across the country who could hunt and protect their families and do everything they do under such regulations -- doesn't make sense"

The time to take the right steps has come.