As if on cue, eighteen or so sets of preteen eyes would turn and stare at me, sitting behind them at a desk with a small ballpoint tattoo on the bottom left corner. They were looking for the tears I had promised them. Pulling out a tissue as a white flag of sorts, I conceded, "Every time. I told you, every...single...time." Satisfied, they all turned their heads back to the television screen and continued watching a story unfold of which they already knew the ending.

To Kill A Mockingbird was a staple of my second semester curriculum as an eighth grade English teacher, which was something I simultaneously loved and hated. The book, by far, was my favorite unit to teach because, you know, that whole "one of the greatest books of all time" thing. I never tired of rereading it, and the rich story and dynamic characters made it a veritable treasure trove for engaging lesson plans and assignments. However, I also felt a particular sadness that the real brilliance of the book was lost on the average eighth grade mind, and I mourned that so many people are probably introduced to this masterpiece way too early to really appreciate it. I mean, these were kids who never failed to derail a class discussion by relating to the most insignificant detail in a story and running with it.

Student 1: You know that part where Atticus shoots the mad dog? Well, that didn't really bother me, because I'm a total cat person. My cat actually likes to swim, even though most cats don't like water.

Student 2: OH my gosh. My cat totally HATES water. She did this super crazy thing the other day where she, like, climbed up the curtains just to avoid walking in some juice that I spilled.

Student 3: That sounds made up. You just totally made that up. Why wouldn't your cat just walk around the juice?

Me: Um, back to the story, let's talk about that shooting incident. Jem and Scout had no idea their father was such a talented marksman. Miss Maudie comments that maybe Atticus "realized that God had given him an advantage over most living things" and decided he wouldn't shoot anymore unless he had to. What does that tell us about Atticus?

Student 2: That he's nice. But also, I just want to say I did NOT make up that story about my cat. It totally happened. Mrs. Suellentrop, do you like cats or dogs better?

Me: (under my breath) I have failed you, Harper Lee.

I had never read To Kill a Mockingbird as a kid. I picked it up for the first time as an adult, so I was able to see it through eyes that held the proper life experience and appreciation of literary technique to fully embrace all the complexities Lee wove into a classic coming-of-age story format. There isn't a page in my well-loved copy of the book that doesn't have an underlined passage, a starred quote, or notes in the margin. For me, reading that story is like a shopping trip through Target: with every turn I find something I need, something I want, something that speaks to me, or something that will change my life for the better. My world was definitely rocked by both Atticus' lesson that real courage is "when you know you're licked before you begin, but you begin anyway and see it through no matter what," AND the realization that the Target brand diapers worked just as well as Pampers at a fraction of the cost. 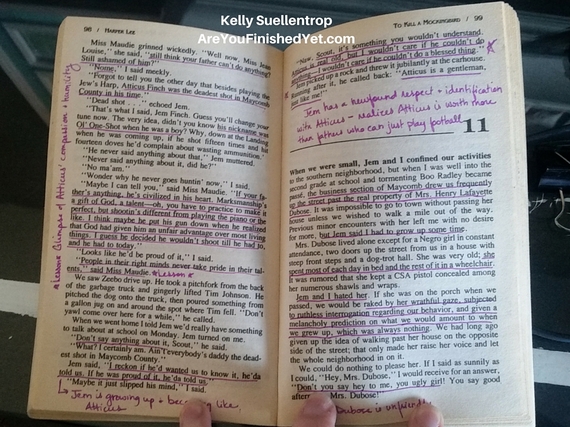 My copy of To Kill A Mockingbird. Just highlight the important stuff. Wait! It's all important!

But I knew my eighth graders would not have those same feelings about the book, for no other reason than they were 13 years old. It would be unfair to expect this story to change their lives, because at 13, most of their lives don't really need to be changed yet. And I don't mean to say they couldn't learn any important lessons from Scout, Jem, Atticus, Tom, and Boo. We used the book to explore racial prejudice, social prejudice, tolerance, and compassion, and the take-aways for them were numerous. But for me to think that more than one or two kids would go on to view To Kill A Mockingbird as anything but "a book I had to read in middle school," would be a little delusional. I mean, I was a pretty good teacher, but we're not talking Dead Poet's Society level or anything. (Though to be fair, John Keating didn't have to teach middle schoolers.)

Still, I tried. At the very least, I wanted the book to leave enough of an impression that some of them might actually pick it back up as adults and, subsequently, have their minds blown. So I tried to make my class lessons memorable. I created a "Secret Mockingbird" game (similar to a Secret Santa) where they would leave little gifts and notes for other students in the hole of a giant cardboard tree I had made, in the same spirit of Boo leaving treasures for Scout and Jem. We even watched the incredible movie adaptation, starring Mr. Gregory "Born-To-Play-Atticus-Finch" Peck, when we finished reading the book (because what kid doesn't totally do a fist pump when she gets to watch a movie in class?). And I tried my hardest to convey the passion I had for Lee's masterpiece, most notably how deeply it affected me on an emotional level. So I would confess to class after class of middle-schoolers the scene that would cause me to shed tears every single time I read it or watched it - the one after Tom Robinson unjustly loses his case, and Atticus is leaving the courtroom...

I looked around. They were standing. All around us and in the balcony on the opposite wall, the Negroes were getting to their feet. Reverend Sykes's voice was as distant as Judge Taylor's:

That moment...it's like the beautiful eye of an emotionally-charged hurricane. Just before it you have the sinking disappointment of a tragic verdict that shouldn't be; right after, when Jem is crying and questioning how Tom could have been found guilty, you have the utter hopelessness of Atticus' statement, "They've done it before and they did it tonight and they'll do it again and when they do it - seems that only children weep." But that moment in between, when those on the side of justice make their silent stand, when Reverend Sykes very simply and very elegantly communicates to Scout there is honor still present in the fight, regardless of the outcome...on the outside, it is a moment of subtlety. Yet everything that Harper Lee doesn't write in that moment is overwhelming: the recognition that Atticus has displayed the kind of real courage he taught Jem about earlier in the book...the realization that even in the face of defeat, the African-American community of Maycomb will not forfeit their dignity nor their hope...the inference of solidarity and mutual respect among these characters who, by this point, feel like real people we love like our own family.

But I doubt any of my students really understood then WHY I cried. To them, it was probably more about the novelty of seeing their teacher in an emotionally vulnerable state in the classroom. Maybe they had bets on whether I was an ugly crier. Spoiler alert: I am.

It has been several years since the last time I read To Kill A Mockingbird. In fact, until hearing of Harper Lee's recent passing, the name Scout had lost a bit of charm with me. Instead of bringing to mind a spunky and insightful little girl wearing a ham costume to her pageant, I think of my dog, whom we named after one of my favorite literary characters. And given her recent fondness for using our carpet as her personal toilet, she is not always in my good graces. Nowadays, when someone in our family yells the name "Scout," it usually means you're going to have to put up with doing something you'd rather not do.

Like reading a book in your middle school English class.

"Atticus, he was real nice."

"Most people are, Scout, when you finally see them."

This post originally appeared on Kelly's blog, Are You Finished Yet.